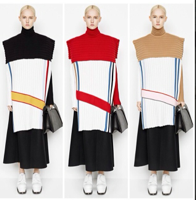 The fabric, which J.W. Anderson describes to be his “pet hate” and says it’s the first time he has ever worked with it, was manipulated into angular silhouettes with restricting high funnel necklines and suspended hemlines that dramatically jutted out.

The designer also cited the work of Dame Barbara Hepworth, the late English artist, whose sculptures informed his shapes. Those with dropped waists, in bias cuts and with slight ruching were his take on the Twenties and turning it modern. The upshot was romance, twisted.

Those scratchy prints on what looked like plastic was actually leather, de-embossed, bonded and then hand-screen-painted. His audience were also thankful that a few looks come up again and again, just in different fabrications, from that corduroy and screen-printed leather to bobbled, boiled wool, grey marl, and an iridescent techy nylon that verged on sporty. With so much going on, this was the sort of collection that warranted a second look.