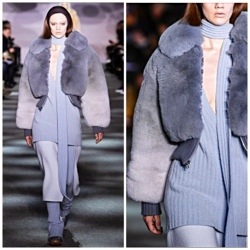 IF all eyes were on Marc Jacobs tonight – for the first collection he has presented for his mainline since leaving Louis Vuitton, as he prepares for an IPO – his nerves didn’t waver for a moment.

This was an impeccably conceived show from start to finish – we walked in under clouds hanging low from the ceiling, as always with Jacobs what seems lighthearted at first glance took on a more sober feeling later as the clouds cast dark shadows over girls with blank, serious faces, their blunt cut hair held back from pale bare faces with Sixties hair bands.

Leaving last season’s Victoriana fiesta in distant memory, this collection was soft, modern and acted like a palette cleanser to begin a new beginning, a melancholy feel underlined by Happy Days Are Here Again playing repeatedly on the soundtrack. With the Sixties a strong reference, tunic dresses came over heel-length leggings in graphic swipes of muted pink and grey jersey, and then bulgy ribbed knit. At one point glitter took over, with cocktail dresses coming over the entire ensemble, and then gorgeous degrade dyed fur bombers made themselves known as the defining pieces of the season.

Later tulle frilled dresses fell in more degrade like a soft stratus version of the clouds above us, in blush or sky blue. Jacobs explained later that he’d been inspired by women who have strength without aggression and with this collection he’d managed to translate that message brilliantly.