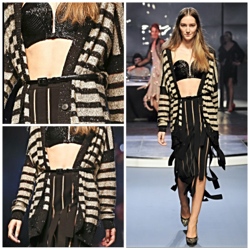 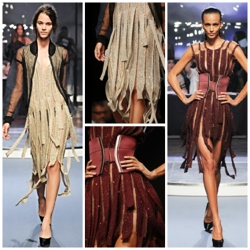 BEHOLD the spectacle of Jean Paul Gaultier latest show. A mash-up of looks from different decades of his tenure, it was a riotous romp of a catwalk, staged as a dance talent show complete with an enthusiastic judging panel.

It was like nothing we have seen so far this season – although Moschino’s greatest hits catwalk was along a similar vein.

There was Coco Rocha as Danny Zuko, arm draped around her peroxide blonde Sandra Dee dancing to You’re The One That I Want (kudos for a faultless routine); Karlie Kloss in all her long-limbed glory Vogueing like a pro; Lindsey Wixson giving it some conical biker-girl attitude; Joan Smalls shimmying to a Latino version of Daft Punk’s Around The World; and that controversial Amy Winehouse figure from Gaultier’s spring/summer 2012 couture show slinking sultrily towards the bank of vying photographers. But what of the clothes?

The asymmetric biker silhouette theme remained strong throughout, as did the drama, which is what this was all about after all. It indulged everyone’s guilty pleasure of the current cheesy talent show craze– although this was anything but. This was pure, unadulterated fashion fun.