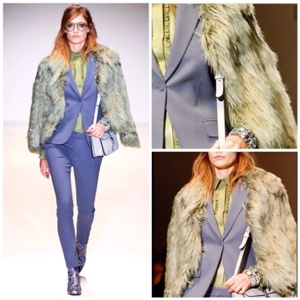 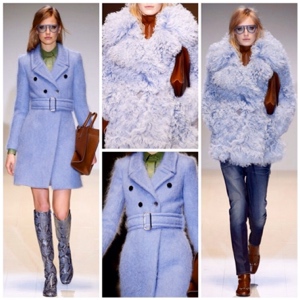 ALL change at Gucci this season. Frida Giannini mined the Sixties – granted, a decade that’s no stranger to this house, the period heralds Gucci’s glory days – but this afternoon, the designer largely turned her attention to daywear.

Giannini is a designer who excels at downtown cool – yes, blue jeans actually popped up here on more than one occasion, and very good they were too in blue, boyish cuts, desirably drop-crotch. They were partnered with fluffy mohair pea coats and stock-collared butter-soft leather shirts that could have almost passed as silk such was their suppleness (Giannini herself selected one, a ruffle-fronted version, to take her bow).

Her palette was beautifully subdued; sage green, dusty pink, duck egg blue, mustard and a cheetah-print pony skin. Sleeveless A-line dresses with bibbed fronts popped up again and again in various guises, and were mostly paired with square-heeled python boots, or otherwise, a neat update on the house’s signature snaffle loafer: now it morphs into a knee high boot, and it set looks off with an authentic Sixties swing. It was young, girlish, and extremely attainable.

But here’s the thing: show goers can be a tricky crowd to please. This, is a Gucci show, and on the one hand, Giannini’s spectators want to be seduced by bombshell looks. They don’t want pink fuzzy Mongolian shearlings, they want glossy fox furs; not only girlish A-line dresses but glamorous gowns too, made for vixens on the prowl – there were none of those here today. The show space didn’t help to that end. The non-branded white box lacked identity. Where was that black, plush-carpeted mirrored-walled room with spotlights that made us all feel like we were submerged in Gucci’s world for a while?

But, in Giannini’s defence, had she offered up too much razzmatazz, critics would no doubt be questioning where her looks are headed in fashion’s pared-back climate, and so, with this more realistic offering, she made efforts to address that. But sometimes, from some houses, we look forward to an element of unattainability. It allows women to dream. The feeling from this collection was a little more in tune with a pre-fall presentation – not a runway show, the job of which is increasingly to sell the brand not necessarily the clothes. Lovely things though there were – and they really were – some of the audience just missed the fantasy and pizazz that they’ve come to expect from this house. 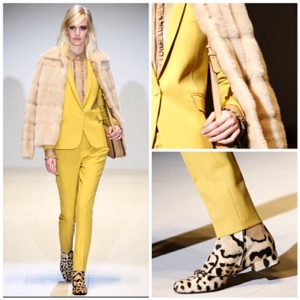 To shop more Gucci visit: www.gucci.com or click below to shop the latest Autumn/Winter collection: