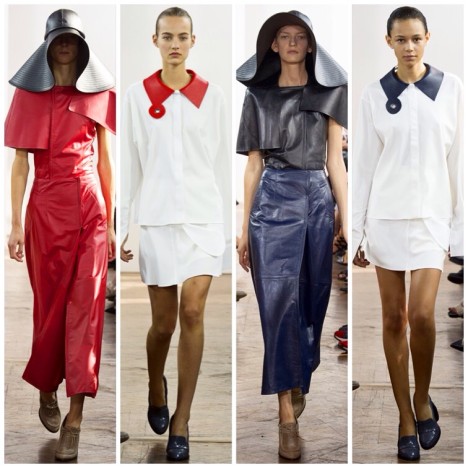 CONSIDERING he’s now at the helm of luxury leather house Loewe, it’s perhaps not surprising that JW Anderson – now fully-fledged and LVMH-inducted – used the fabric generously in his own eponymous collection, one that was surely his strongest yet and beautifully cemented the JW Anderson brand.

“We were looking at our DNA, thinking what things made it and how to own them,” explained the designer backstage, citing leather in particular as being one of them. Proof – as if any were needed – that he and Loewe should have a long and happy friendship.

But here he said that he was trying to refine it, take it to a new level – which is a hallmark of this designer, always ready to try something in an unexpected way and always delivering on the promises. Remember last season’s corduroy evening gowns?

But aside from the leather, he cited surrealism, workwear, psychedelic, suspended architecture, “a lot of chopping” and the idea of a voyeur as all informing his direction – or rather streamlining his identity – this season. The latter reference via huge floppy leather fisherman hats that simultaneously shrouded and framed the models’ faces through their folds, revealing a jigsaw piece at the neck. “I like the idea of having to look up into the woman,” he said. 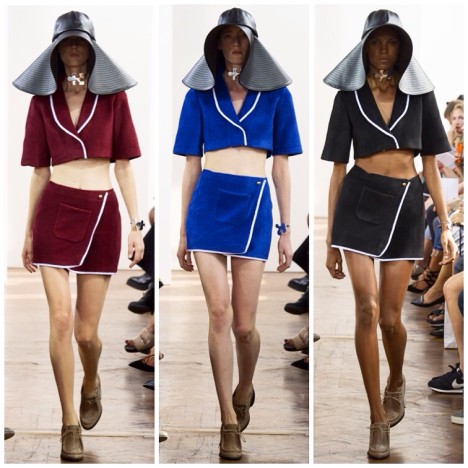 The surrealism came through the layering of seemingly separate garments – leather midriffs that affixed themselves throughout – and densely knitted dresses that, described Anderson, looked like “wallpaper, something domestic”. And it’s an area we’ve seen him subvert before. “These are meant to look like towelling,” he said, gesturing to the line-up board and the series of cropped and midriff-baring jackets and miniskirts, their blue hems piped in white just like you might find in a bathroom. Again, surreal. And surprisingly seductive.

It was industrial as we know from him, austere but with considered and restrained moments of femininity with brightly-coloured camisoles twisted at the front atop slinky knits, and blushes here and there of baby pink. Huge buttons were details to note, oversized rivets punctuating collars and lapel-shaped cut-outs exposing flesh.

“It’s a bit like suspended architecture,” he referred to looks backstage, adding that this season was the first time he’d done “serious heels” on the shoes – a literal incarnation of dragging ones heels, all clumpy and vaguely-clog-inspired as they were.

JW has many fashion fans – not least in the shape of LVMH of course – but those sitting front row and beyond were left feeling suitably well fed for spring/summer 2015. 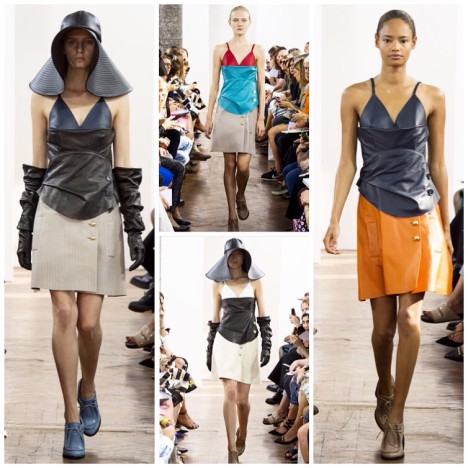 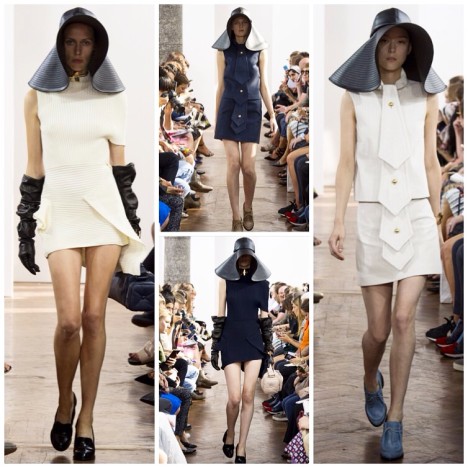