When they are, in fact, a fashion designer.

When you think of print, there are handful of designers that instantly spring to mind: Jonathan Saunders, who started out fashion life with his colour-blocked bold designs in 2003; Mary Katrantzou, who seemingly singlehandedly put on the map and cornered the market in hyper-real and digital print back in 2009; and Peter Pilotto, the Antwerp-trained duo whose rise began in vivid sharp shots of mesmerising moving colour.

“The idea of creating something so hyper-real had never been seen in print,” recalls Katrantzou. Perfume bottles and interior surrounds that morphed into lampshade skirts followed and she was the queen of a new generation of designers embracing print in a new way.

This was circa five years ago and print then went big, becoming a firm high-street trend. “It got so diluted,” reflects Katrantzou. “No one expected print to be such a big phenomenon.” It became, she says, a tool that everyone used – even so far as the means to “commercialise” a collection, and eventually for her that wore off. “I felt I had nothing more to say.” It was time to do something new. But how, when that’s what worked to launch your brand? When that’s what your audience – customers – are just beginning to know of your work and turn to you for exactly that: print?

Leapfrog forward to now and while all of the aforementioned designers can still be strongly associated with print or more specifically digital print – and all happily so by their own admission – they’ve moved well beyond it too, successfully so. The fashion riddle is how?

“It can be quite conflicting for a designer growing up so quickly with something that defines them,” says Katrantzou. For her, it took about year to figure out how to move on once she felt it was time to – and the introduction of resort was key to this, somewhere to dabble in different ways to use print, of surface design.

“Print used to decide elements and define the silhouette. So many details we didn’t think of before got lost in the print are now the focus,” she says of her evolution, summing it up at the time as “print obliteration”. But now she’s deconstructed that and notes lace, brocade and embroideries as being just as much a part of her DNA as those initial hyper and surreal prints. Take a closer look at them and you’ll see they spell out Mary Katrantzou. For her, overall it’s about a visual language – be that by print or by texture. 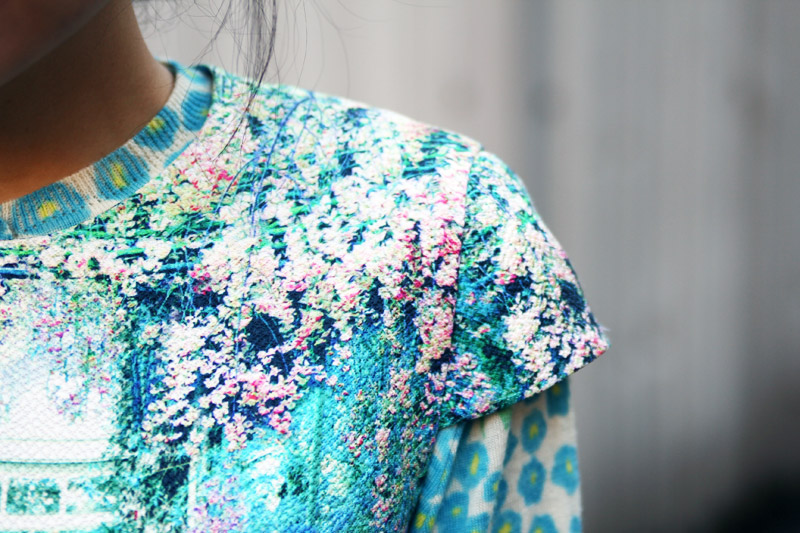 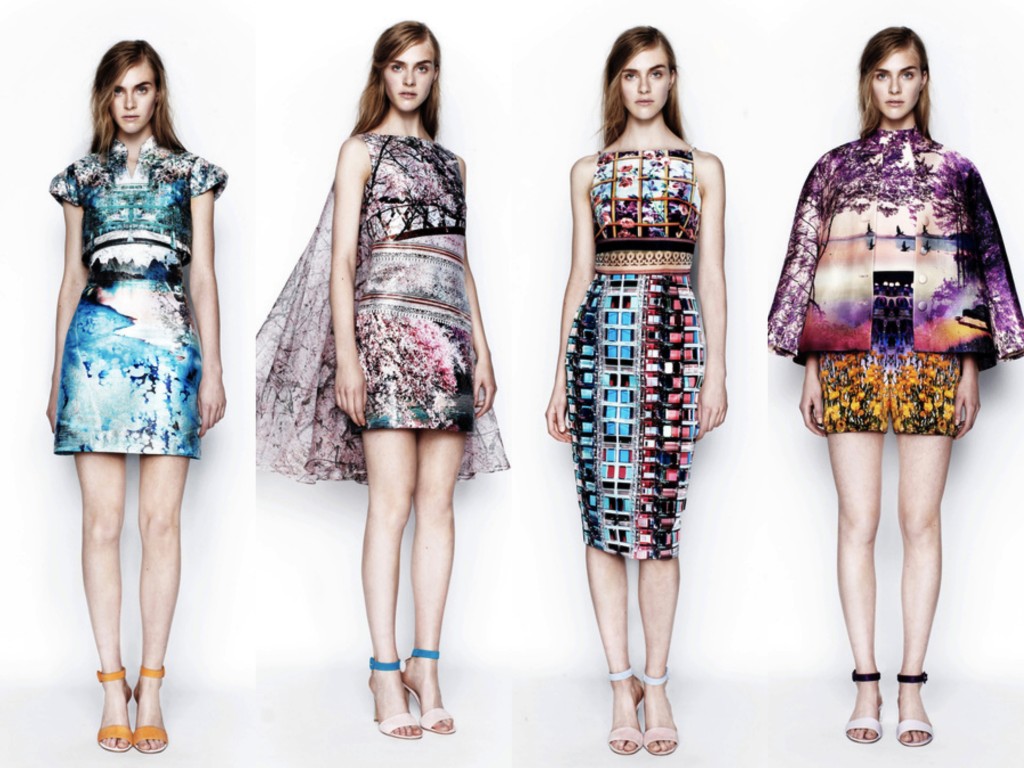 Peter Pilotto (the eponymous half of the duo along with Christopher de Vos) takes a similarly laidback approach to the role of print in defining the label’s career.

“It just happened to be that way and our intention never was that we would be a print-only brand.” It just so happened that around 2010 (though they launched in 2007), two names  – his and Mary K – were excelling especially well at it. And in a busy London – international and global fashion market place – standing out is key. They did.

“When we started we did a couple of collections that had print and other things, but the print was the best way to personalise a collection at the time.” The print industry was supportive and the stores were eager. “So we were like, let’s push that technique.”

For them it was a first step, other techniques and ideas simmering away in the background. “It was all about a signature we subconsciously developed,” Pilotto explains, as we sit in the brand’s east London bright and spacious studio. He recalls an insightful anecdote to illustrate the point. “It’s funny, one celebrity wore an embroidered skirt and the knit top as an outfit and then people still wrote ‘printed dress by us’ – so ultimately it was about the aesthetic and the technique itself was not so important.”

It happens still, but seems actually to be a grounding, rounding if not reassuring exercise. It means they – the brand – are recognisable, they’ve made an impact. “For a long time, even in spring/summer 2012, one of the collections that got loads of attention – there were other techniques – but people just couldn’t see the difference as much. But ultimately that doesn’t really matter – there are so many things that surround us we don’t know exactly what they’re made of but so long as we’re attracted to them that’s what counts,” he says.

It’s a refreshing non-precious perspective. And Pilotto points out that essentially it means they’ve managed to push the craft – whatever it may be – to beyond a technique, to the point that regardless, it’s become recognised as “very brand signature”. And that’s worth something. “The important thing is that the result is effortless for the customer – whatever the technique they assume it might be, it doesn’t matter.” 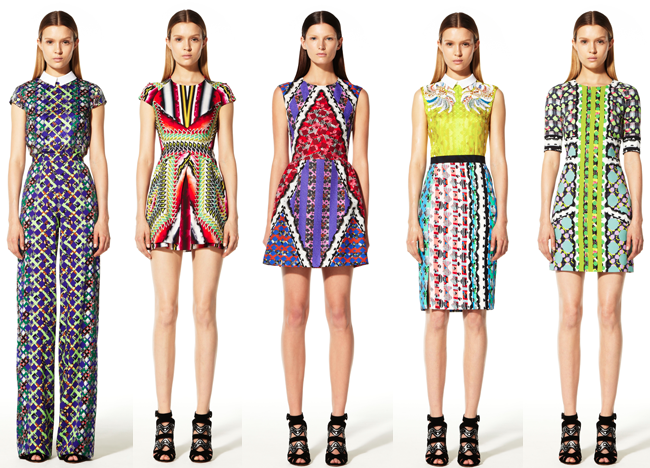 Jonathan Saunders, whose designs were on the catwalk while the likes of MK and PP were still studying in class, points out that there is a distinct difference between being a print designer and a fashion designer.

“I studied textile design at Glasgow School of Art and textile designers are very strongly linked with the fine-art department. You could design a textile and it could quite easily be fine art – you had to justify it. The textiles takes the priority. When you start working in fashion you understand that the garment has to dictate, it has to be a product that someone wears,” he explains.

“When I started out, it was so simplistic because I was saying so much with this textile. But if that garment becomes something special I want to say, then the print takes secondary position – and that’s why I became a fashion designer – as opposed to just textiles.” That’s the difference.

“Designing clothes you have to think about the person wearing them – she doesn’t want to wear a house, she doesn’t want to feel like the painting is more important than how it makes her feel” – it goes back to Katrantzou and Pilotto’s point, it just becomes a vehicle that facilitates the designer’s idea or collection, it’s not the overall objective.

By his own admission, Saunders agrees he could, back then, be and was considered a “print designer“. And though he’s flexed his skills well beyond this, it’s fair to say he, like the others, will always be linked to a certain vibrancy of pattern in our minds. Did he and does he ever feel pigeon-holed because of that – and how easy or not was it to get past?

“I don’t think that’s the case now and British fashion is much more sophisticated.” And not using print when he was potentially expected to gave him the chance to learn and grow as a designer – even though, similarly to Mary, it was perhaps difficult for customers and press to comprehend. “Designers that are smart create a signature that is really identifiable and they say that at the beginning and once established that allows them to expand and grow,” he says. And he perhaps hits the nail on the head essentially with what all of them have managed to do. Even beyond the seasons of when  there was the idea that “print was in fashion”.

“From a customers’ perspective, someone who finds the joy in decoration and products wearing things that are decorated and colourful and different techniques – that has always existed,” he points out. It’s not really an “in-fashion” thing.

Like anything, there are seasons when we see more of something than not and the moral of the story is: there is more to life than print, certainly for these three designers anyway. 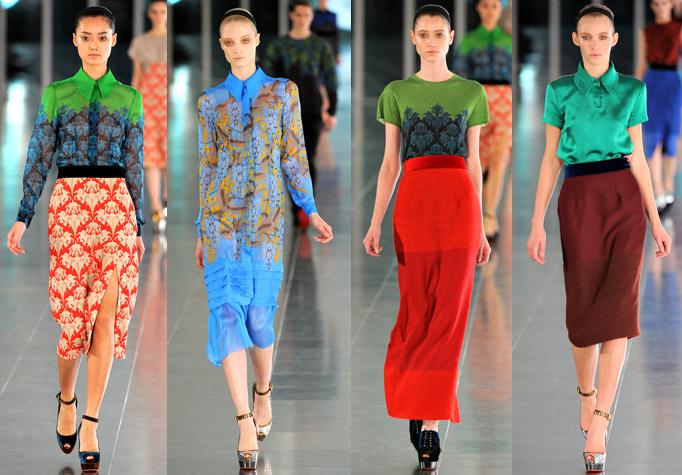