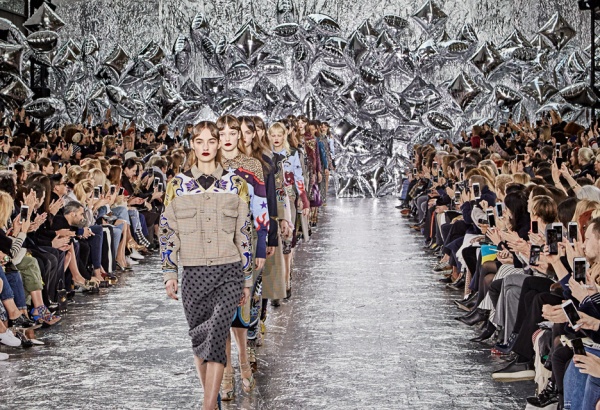 The fashion month catwalk sets are helping to turn fashion shows into the awe-inspiring spectacles they’ve become. Designers are enlisting the help of highly regarded artists-turned-set designers to create the impressive catwalk sets, which are often scaled down and carried through to window displays to complement collections. Catwalk set design also serves as inspiration for high-street retailers wanting to create eye-catching window displays and in-store installations relevant to seasonal trends.

This year compared to last years set designs are even more spectacular than before.

Always known for crafting an intricate runway set, this time, Anya Hindmarch went for a pixelated look. The set was like one big game of Tetris, with movable square panels that flashed colors and lights, in time with the music.

Set designer: Set designer Stuart Nunn of INCA Productions
Theme: Retro 8 bit graphics and arcade games inspired the collection, comprising colourful pixels, Pacman ghosts and space invader motifs. This playful concept was carried through to the set design, where the floor and wall was made up of acrylic LED panels. Reminiscent of both 8-bit graphics and Rubik’s cubes, the light-up cubes began as a giant wall, before sliding across the floor. 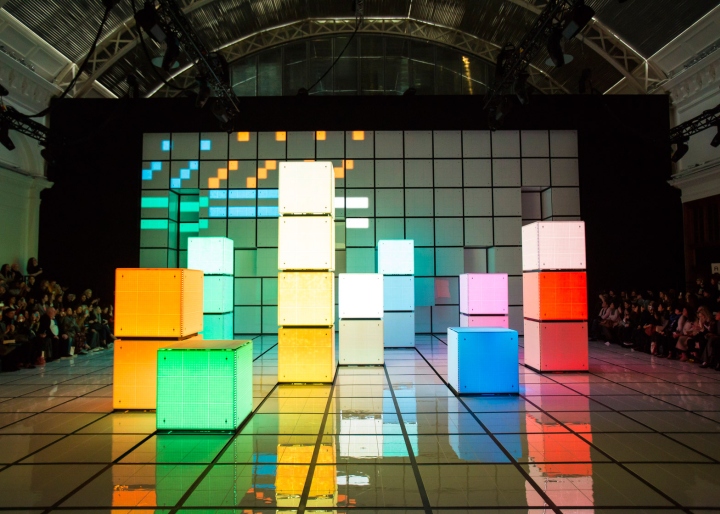 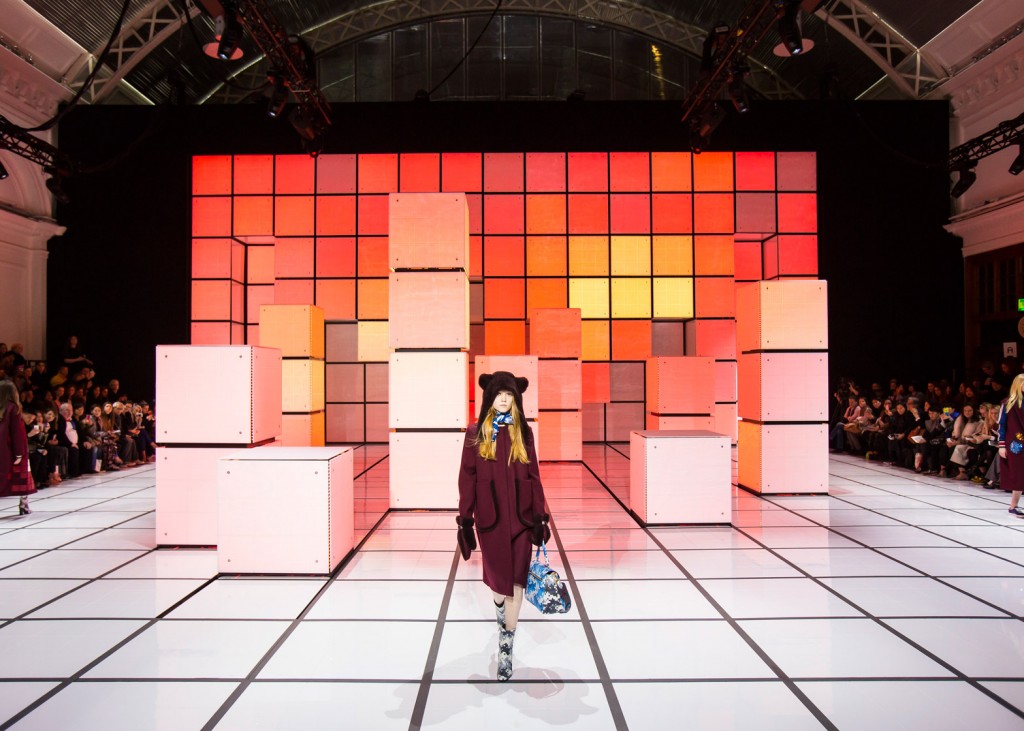 Set designer: London based set designer Gary Card
Theme: Roksanda’s set was a 160 metre midnight blue mural all hand-painted by Gary and his team, to complement the collection inspired by cult classic The Night Porter as well as the work of legendary photographer Deborah Turbeville. 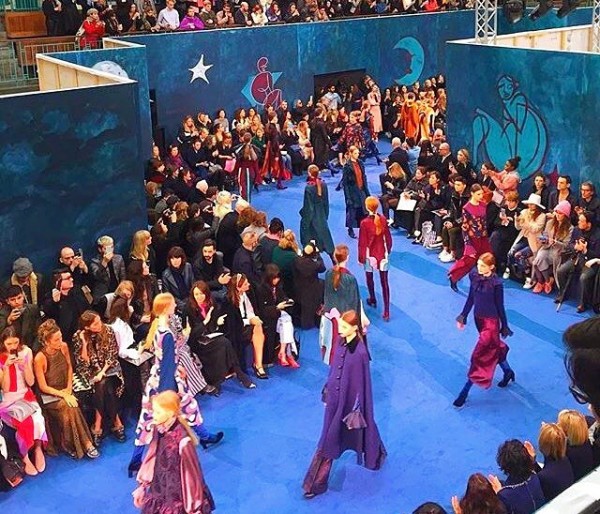 With former Céline accessory designer at its helm, Mulberry’s getting a whole new look. And after lagging behind in the handbag and shoe department, it’s a welcome return to the scene. New creative director Johnny Coca served up envy-inducing printed totes and studded purses that will be considered “it” bags in no time.

Set designer: Brussels-based company Villa Eugenie which designs and stages fashion events
Theme: The first collection from Creative Director Johnny Coca was inspired by everything from Shakespeare, tradition and royalty through to punk rock. This eclectic ensemble was carried through to set design, made up of a multi-faceted mirrored backdrop which contrasted against the Guildhall’s historic stained glass interior. 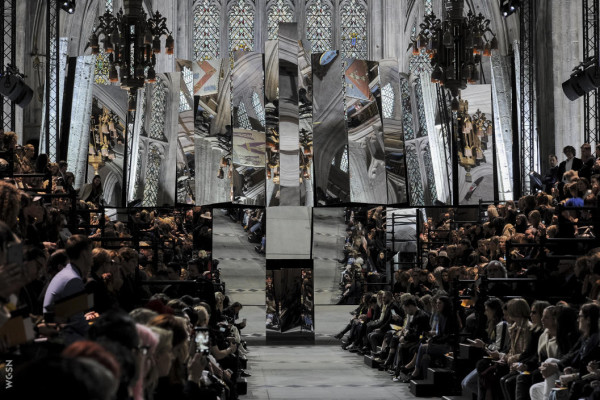 Set designer: Special events company, Bureau Betak
Theme: The collection is based on a love story of opposing halves, drawing inspiration from twisted tales of romance such as Wild At Heart, Natural Born Killers, and Baz Luhrman’s Romeo and Juliet, resulting in a country and western-meets-50s Americana aesthetic. Influenced by Andy Warhol’s The Factory, the simple-yet-striking set comprised an aluminum catwalk and metallic silver helium balloon backdrop. 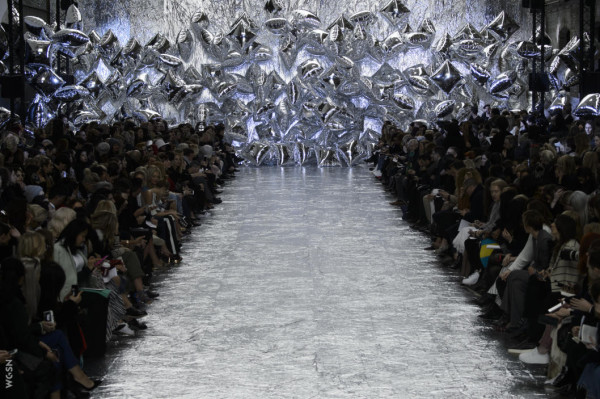 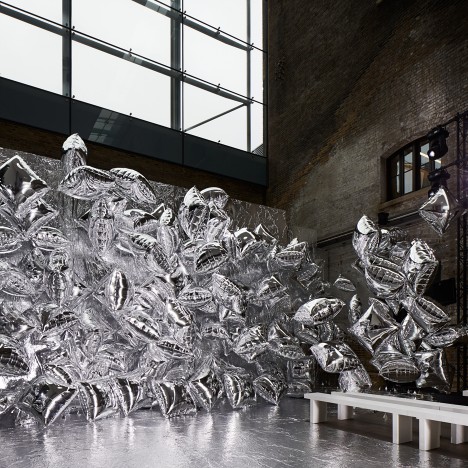