Sunday evening in Los Angeles was filled with standout red-carpet moments at the Golden Globe Awards, with Hollywood’s A-listers taking cues straight from the new spring collections. A cheery sunflower yellow palette dominated with actresses Naomi Watts in Gucci and Leslie Mann in Kaufmanfranco both opting for bright strapless column dresses, while a softer cornflower color blossomed on Jenna Dewan Tatum in Carolina Herrera and Elettra Wiedemann in Giulietta. 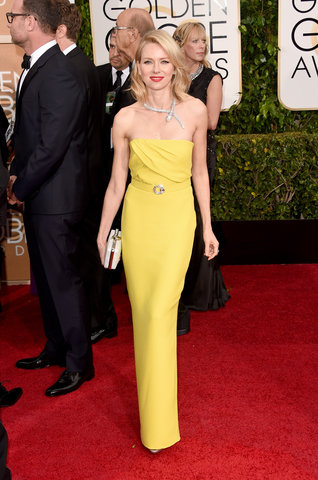 Metallics also proved to be popular, adding a much-needed touch of shine to the red carpet, and Julianne Moore led the pack in a custom Givenchy Haute Couture dress with floor-sweeping feathered fringe. Dakota Johnson shimmered in a Chanel Haute Couture slit dress, while actresses Reese Witherspoon in custom Calvin Klein Collection and Diane Kruger in Emilia Wickstead took a decidedly more demure approach to the idea of sparkle. 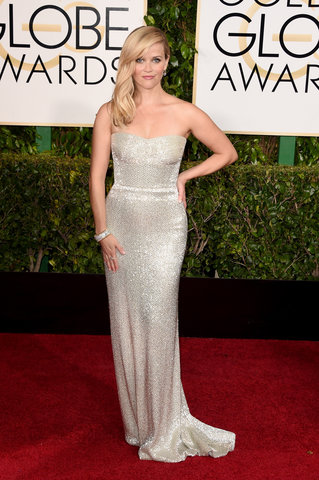 Vivid shades of red were a favorite with fellow Girls stars Lena Dunham in Zac Posen and Allison Williams in Armani Privé, as they were with Viola Davis in Donna Karan Atelier and Taylor Schilling in Ralph Lauren Collection. The pleat work and draped hemlines on their dresses amped up the drama factor of the night. 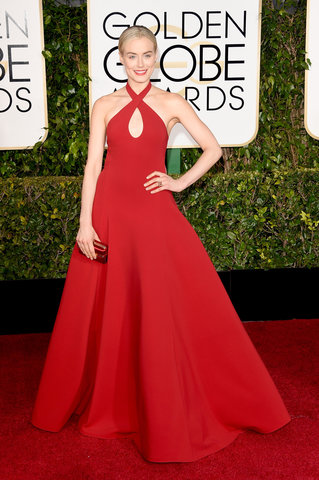 Several starlets evoked a neo-Grecian spirit, including Emily Blunt in Michael Kors, Amy Adams in Versace, and Julia Louis-Dreyfus in Narciso Rodriguez. That silhouette was echoed on Amal Clooney, who sported a one-shoulder black dress from Dior Haute Couture; although with gloves (husband George said they were her own) and a coordinating bag, she gave the look her own personal spin recalling Old Hollywood glamour.​

But the real winners of the night were those who took chic and well-timed fashion risks. Among them was Claire Danes who showed how to step the bohemian look into the night with her Valentino dress; Keira Knightley whose tiny baby bump was cleverly hidden under her custom Chanel dress; Kate Hudson whose daring Versace look harked back to the safety-pinned sex appeal of Elizabeth Hurley, and Lorde whose custom Narciso Rodriguez pantsuit and bra top was a youthful breath of fresh air on the red carpet.