The success of Anya Hindmarch’s line of leather stickers, designed in collaboration with Charlotte Stockdale and Katie Lyall’s creative consultancy Chaos Fashion, has been nothing short of remarkable. Launched in Spring/Summer 2015, the stickers, which feature smiley faces, “yes” slogans and cartoon thunderbolts, have proved a hit that has generated over $18 million in only two seasons. “We’re hitting three hundred thousand ordered — 12 million pounds ($18.7 million) of retail,” said Hindmarch, whose London-based luxury accessories brand, which has 56 stores worldwide, has brought an injection of playfulness to the oft-traditional world of leather goods.

For decades, schoolchildren have half-jokingly defined themselves by who or what they stuck on their schoolbooks and notepads. From pop-stars to monster trucks, My Little Pony to Power Rangers, the act of taking cultural motifs and, literally, sticking them to our belongings is a fond childhood memory for millions, including Hindmarch.

“When I was at school I was in uniform all the way down to the shoes, and so you would sticker up your notebook. That was the fun element — it was the only form of personalisation available, the only type of fashion when you’re sitting in an all-girls boarding school,” she said. But Hindmarch thought little of stickers, until she came across a technology that enabled her to render intricate, colourful designs in leather, turning the humble sticker into a luxury good.

“Until now, you could cut leather, you could edge-paint it and you could even print on it — but you could never create a really interesting shape. Now, there’s this type of high-frequency treatment of leather, where you can actually seal leather without stitching,” said Hindmarch. She immediately recognised the commercial potential of grown-up versions of those same stickers that continue to emblazon schoolbooks the world over.

“I love the idea of craftsmanship meeting technology. I’m obsessed by labelling things, so I was playing with that idea and I said, actually, it would be really fun to use this technology to make stickers. The fun thing [about the stickers] is it is a way to personalise products, be it your phone, your office door or whatever it might be. It’s a way to make people smile — they’re quite fun. We all carry the same phone, for Christ’s sake!” she exclaimed. “We opened a store in Westfield this week and a woman came in yesterday and chose a handbag and six stickers — and right there, in the store, we stickered up her bag. That’s really what it’s all about.” 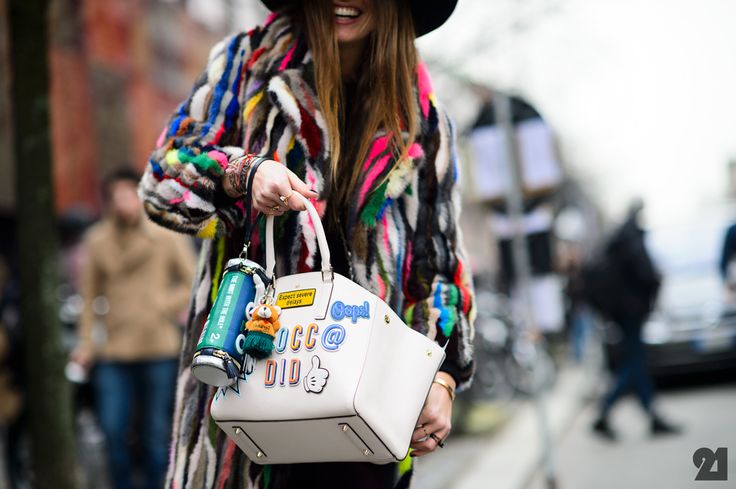 The resulting line of stickers, priced from £35 to £125, has a pop-ish exuberance. The typography and iconography is immediately recognisable — take the Mickey Mouse-esque white-gloved thumbs up — but the craftsmanship fits the luxury market.

“We worked with our great team of in-house graphic designers and Charlotte Stockdale, who is an old friend and someone I’ve worked with for many, many seasons. We sort of gathered all these lovely things like two girls in a children’s playground. We worked with things you can kind of recognise and we made them our own, or we started a lot of them completely on our own,” she said.

At first glance, the stickers might look like a marketing tool, similar to the adhesive brand logos of Apple and Supreme, but for Hindmarch, stickers were more than that. The designer was confident enough to order the first run of stickers in the “low tens of thousands.”

“In Selfridges, one of the first [retailers] we did a sticker shop with, we extended it twice. We literally sold out across our retail,” said the designer. “There’s an element of it as the ‘lipstick’ of the brand. It’s an accessible, fun way into the brand, which has gone ballistic, for want of a more kind of exotic term,” she continued.

Hindmarch launched the sticker line with events in key markets, creating a demand that outstripped stock. “We then had a real frustrating time of just waiting. We were out of stock for a long time and we’ve just gone back into stock now, so now it’s just trying to forecast forward,” she said. In addition, the complex technology used to produce the stickers impacts the manufacturing costs. “The margins probably could be better, to tell you the truth, but they’re not bad. Also, I think it’s really important to make them and to package them beautifully,” she continued.

Quite unexpectedly, given their diminutive size and comparatively low prices, Anya Hindmarch’s stickers have enabled the brand to renegotiate retail agreements with key stockists. “It has helped us to get even more favourable conditions with our existing partners in terms of retail spaces, more wholesale spaces and growing new ones. It’s highly visual and it’s highly commercially successful. It has to be both,” explained Helen Wright, chief executive of Anya Hindmarch.

Hindmarch is convinced that the category is not just a short-term gimmick. “You just follow your nose — I think it will become a fairly permanent category for us,” she said. The designer has already set about expanding the role of the stickers across her business: “We thought we’d take it into the wider collection and do bags that incorporated stickers as well as also individual stickers. We will absolutely continue it and roll it into the [other] collections.” 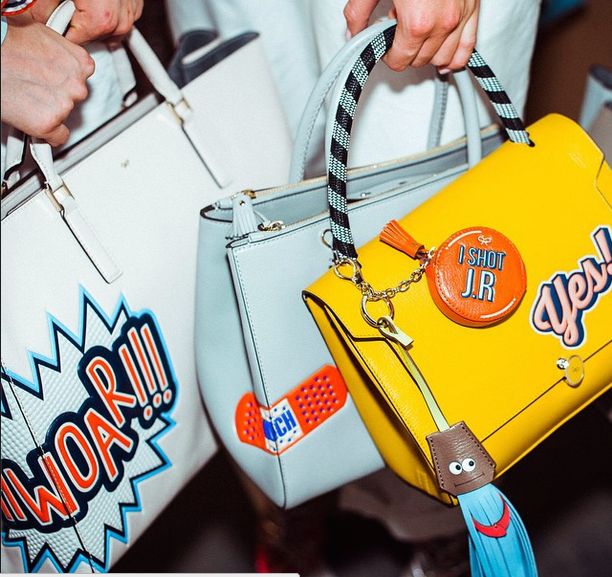