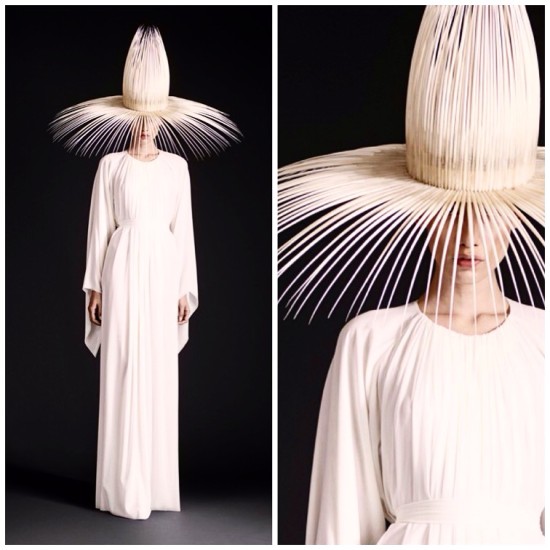 Gareth Pugh would normally be showing in Paris. Instead, he staged that enormous “immersive presentation” in New York, so Paris had to make do with some one-on-ones in the showroom. Actually, it worked out really well, because it was the autumn equinox, and Pugh’s collection was fully informed by the pagan rituals attached to such calendar watersheds. Although in this case, it was obviously the rites of spring he had in mind. “I’ve had 10 years of doing this, and my last season in Paris I hit the reset button,” said Pugh. “It felt like the end of something signaling the beginning of something else. That’s why the phoenix is in the film.”

“I wanted it of the earth, rather than landed from a spaceship,” he continued, in tacit acknowledgment of the fact that his clothes often remind people of something extraterrestrial. So there were corn dolly hats, and steer skulls made from papier-mâché, and a playsuit fashioned after Scottish Burrymen, who would be ritualistically covered with thistles and other sticky things (here, the “thistles” were little flowers of chiffon, arduously attached by hand). There was also a huge round circle, like a satellite dish covered with hand-ripped rags of chiffon, that echoed a folkloric outfit known as the Padstow Obby Oss. There was a proper scarecrow made from sackcloth, too. Pugh worked with Simon Costin, from the Museum of British Folklore, to get everything right. 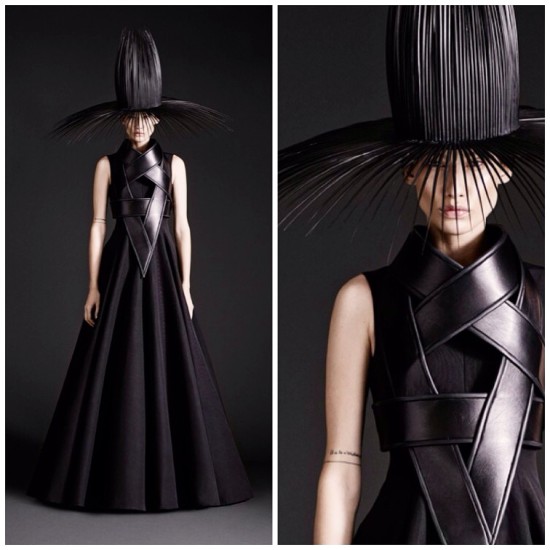 But he cleverly transmuted those obvious showpieces into actual clothes. Handkerchief-hem dresses composed of chiffon rags in white had a virginal purity that seemed destined for the May queen. The sackcloth was cut into the same silhouette. “It hangs like silk gazar,” Pugh enthused. “I love the inexpensive looking luxurious.”

“Frayed luxury,” he called it. Well executed, but a bit haphazard. It was a new way to view Pugh. He liked the fact that the black and white geometries that are a signature fabric for him felt like they’d been made on a loom, with a bit of a slub. The same pattern was duplicated in the silk chiffon of a bias-cut goddess gown, as a reminder that Pugh knows exactly what he is doing. His precision as a designer may have been most obvious in the way he took the big leather pentagrams he’d had made (rustic paganism gone truly occult) and turned them into sensational harnesses, the kind of item that would add sinister spine to any old piece of tat you chose to wear. 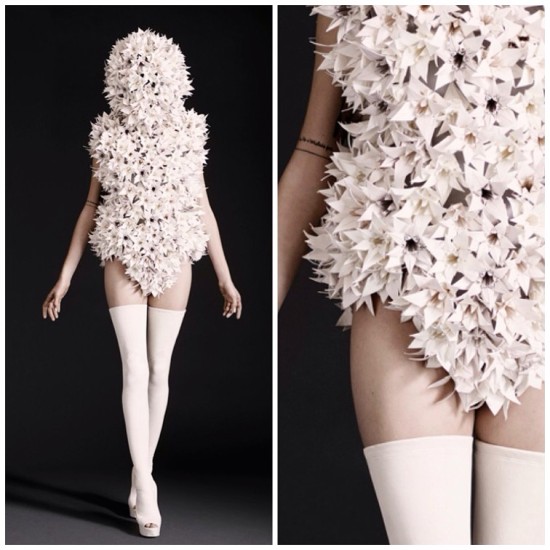 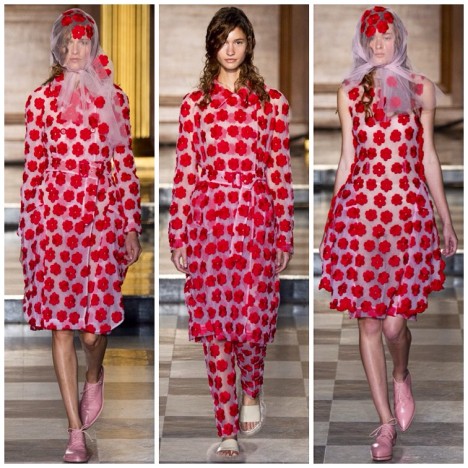 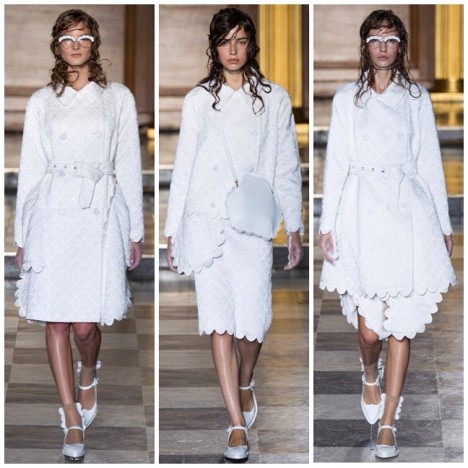 Simone Rocha must be the most romantic designer working today. The most, because she doesn’t interpret romance as surface prettiness; she evinces a real disdain for the lazy storytelling of rococo frills or wispy lengths of chiffon. Rocha gets at the emotional life of romance, its skipping heartbeat. This season, with a tip of the hat to Pina Bausch, and to Wong Kar-wai’s Hong Kong, she conjured the ways love can make you feel sideways and see-through, or like a floral bouquet, overripe, reaching out to be touched. Love making you feel languorous, impatient, and dark, dark, dark—as though that throb of constant longing must be so obvious it’s scribbled over you, or growing off of you, like moss. In its best passages, this strong show expressed the torch song tawdriness of romance. For god’s sake, there was even marabou.

Fabrication was key here. You could even say it was the central focus of this collection. Rocha has always been ambitious with her textiles, but what felt new this season was the sensitivity and specificity with which she deployed them: a light touch of embroidery on pink mesh, the graphic counterpoint of floral embellishment on a sheer white sheath, that lurid marabou snaking around a dress of silvery brocade. Black or white cloque introduced a tone of reserve, its tactility serving less as an invitation to be touched than as a kind of shell. Love can make you hard and aloof, too. Rocha’s genuinely weird looks merging nude mesh and white cloque seemed suggestive of the schizophrenia of romance—the vulnerability and fear of same. We are tender. We grow walls.

Those pieces will prove challenging at retail. Not so the breakthrough looks here: Rocha forged new ground with the gaudy red floral in the collection. This was her first significant use of print, and she entered it into her aesthetic vocabulary with real aplomb, making it three-dimensional via appliqué. The simple red floral dress appliquéd all along the hem and down either side was the standout look of the show. It made your heart skip a beat. It made you fall—at least a little—in love. 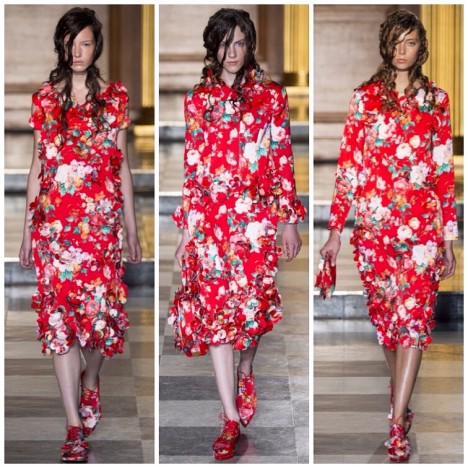