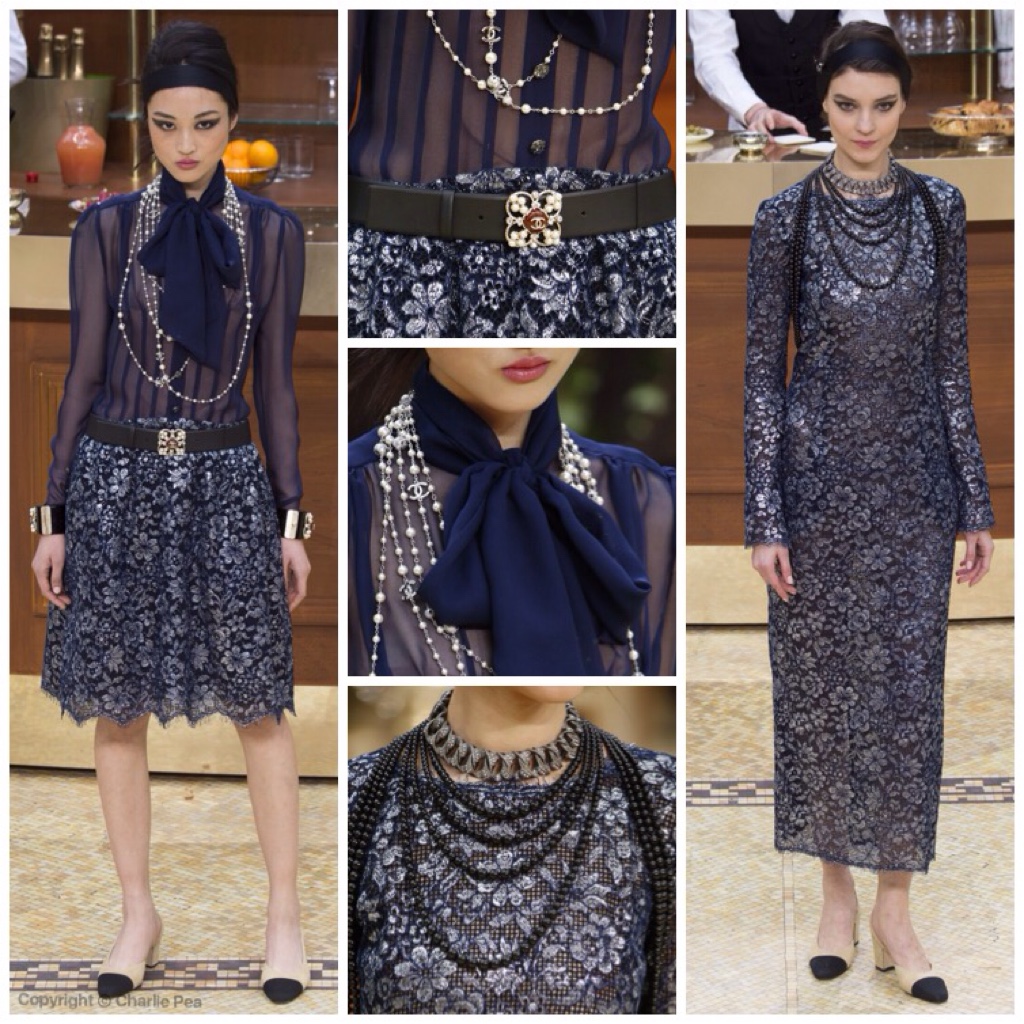 There can’t be many better places to spend a Tuesday morning than at the Brasserie Gabrielle. With a multimillion pound budget, Karl Lagerfeld transformed the Grand Palais into the chicest – and largest – of Parisian cafes, complete with mosaic tiled floor – OK, it actually turned out to be printed vinyl, but this is a cafe after all, wipe clean is important.

Bow-tied waiters busied themselves cleaning glasses and making coffees from behind a wood panelled counter where baskets of pastries, boiled eggs and toast, and other delights were left to tempt. Models entered through revolving doors and took their seats around white tablecloth banquettes, they plonked down their Chanel bags and read Le Figaro or browsed the CC menu while tapping away on smartphones waiting for other model friends to join them. The fact that Gabrielle Chanel was central to glittering Café Society, where artists, actors, writers and intellects mingled, is well documented, and with Chanel’s Café Society line of jewellery set to launch, it’s little wonder why Lagerfeld tapped into this buzzy scene. 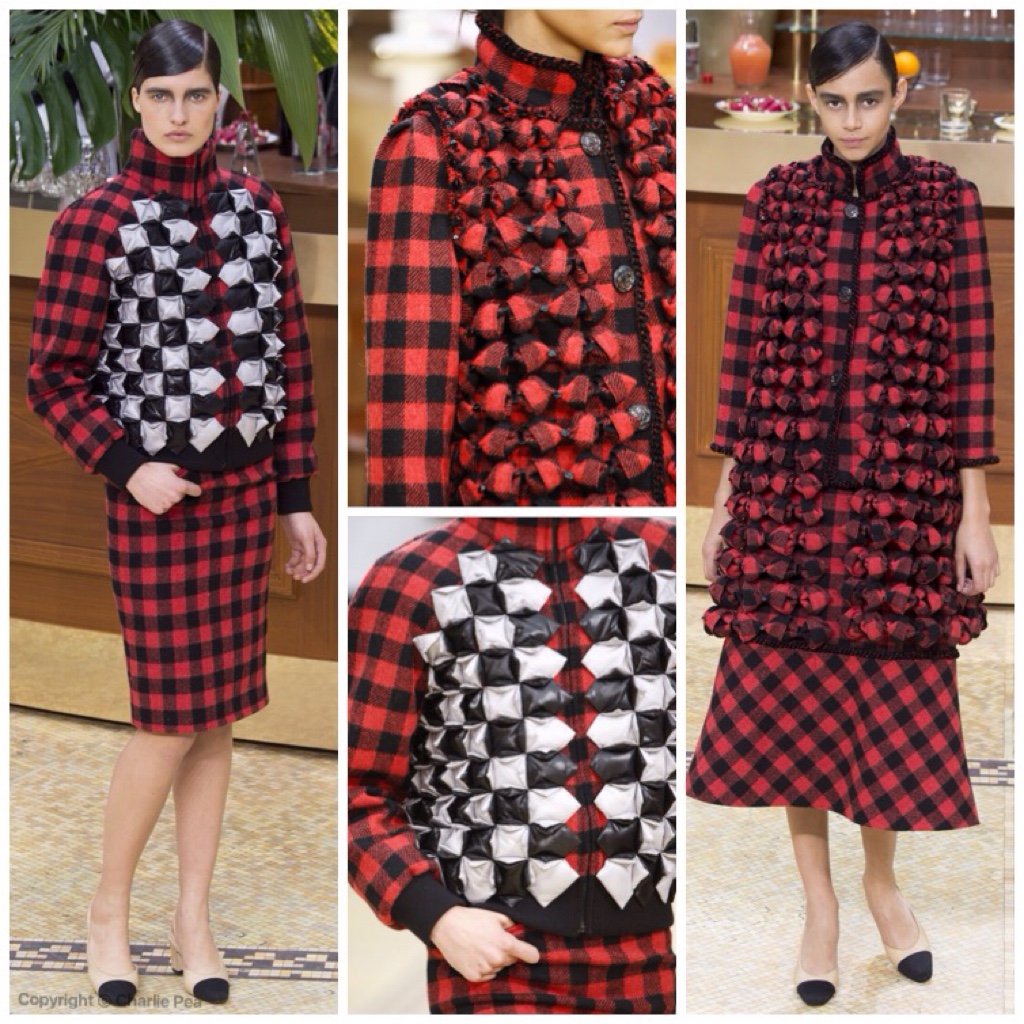 Arguably the clothes were as creative now as they were back then, take the jaunty knitted sweater tied around the neck for example, it boasted a neat pouch at the back in which to slot a newspaper (well, in these circles you’re nothing if not well read). There were tweedy skirt suits updated with padded bow tie-shaped quilting on shoulders and sleeves, while other longer midi-length tweed skirts were layered over slim black trousers cuffed in lace. For the weekend, Lagerfeld offered a sweet pink sweater dress decorated with a pearl harness, or a pair of cropped and flared indigo jeans, partnered up with a gold medallion coin belt and metallic cardigan propped just so over shoulders. Come night-time, those long ivory silk skirts crafted from layer upon layer of napkin-sized silk squares took on an apron look. Albeit, the very smartest of aprons.

The Assiete, a bistro plate clutch of course. 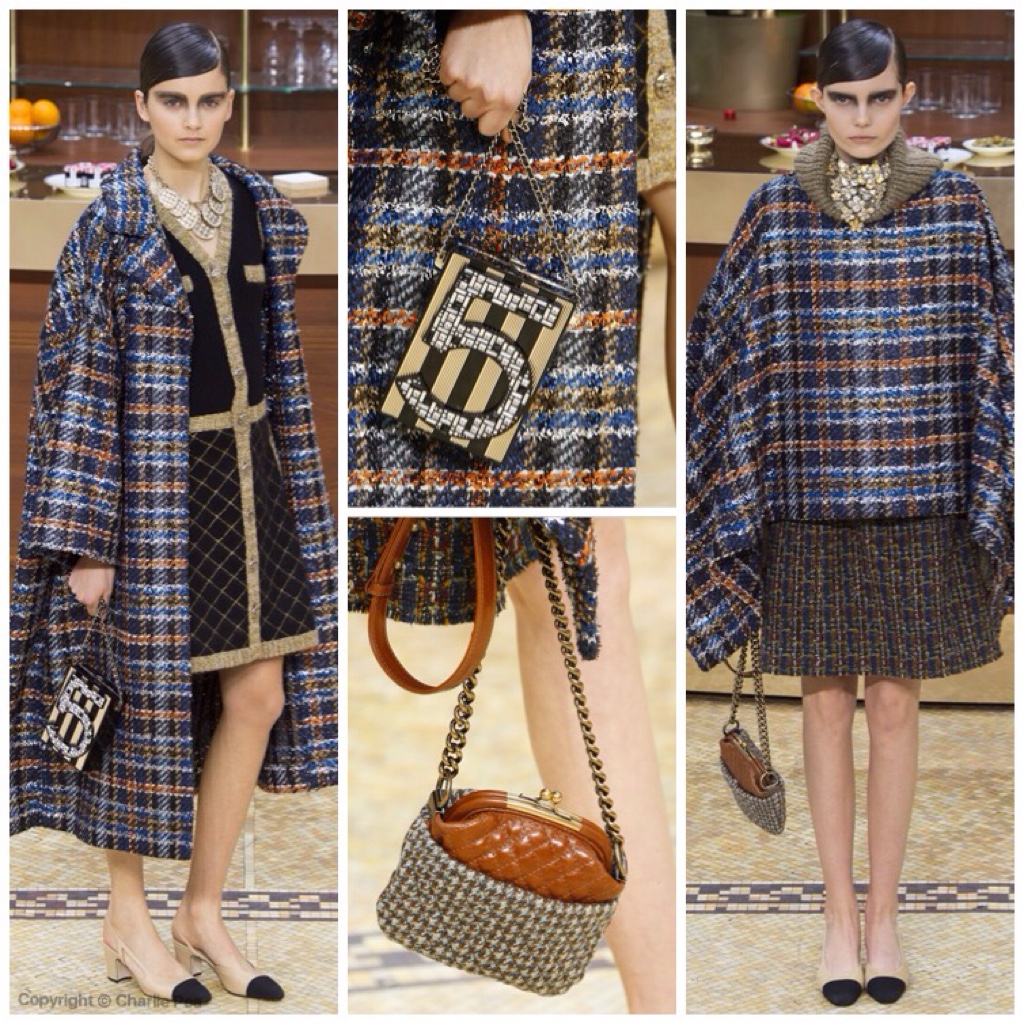 Surrounded by Chanel’s romantic cliché of a Parisian street – all bakers, cheesemakers and cafés, Princess Caroline of Monaco summed up in a few heartfelt words the evocative black-and-white movie set at Rome’s Cinecittà studios.

“In the current circumstances, it was rather touching,” she said.

This was Karl Lagerfeld’s ode to Paris and the French film connection with Rome, dreamt up long before the tragic events of last month in the French capital.

“I don’t think there has ever been a time when France and Italy have been closer,” said Karl, referring to the Cinecittà post-war period.

“But I didn’t know when we started the idea of Paris in Rome that it would be the best moment to show a perfect, romantic Paris – when in reality it is the opposite.”

Karl was inspired by French actresses who were dressed by Chanel in Italian movies. They included Anouk Aimée, Jeanne Moreau and Delphine Seyrig – although it is unlikely that the glamorous international clients gathered for the event would have even heard of these stars of a Parisian past.

The strange thing about this Chanel Métiers d’Art collection, designed to celebrate couture craftsmanship, is that it seemed plunged in nostalgia.

Unusually for Lagerfeld, a designer who embraces the future, the clothes were built on threads of the past from hefty tweed trousers, which Karl called Palazzo Pyjamas, to black lace trickling down body and legs into two-tone mules with pearl heels.

The sexual side of the show included short “oh là là!” skirts and the sensual lace. But that too seemed, however appealing to clients, to belong to a please-your-man past. 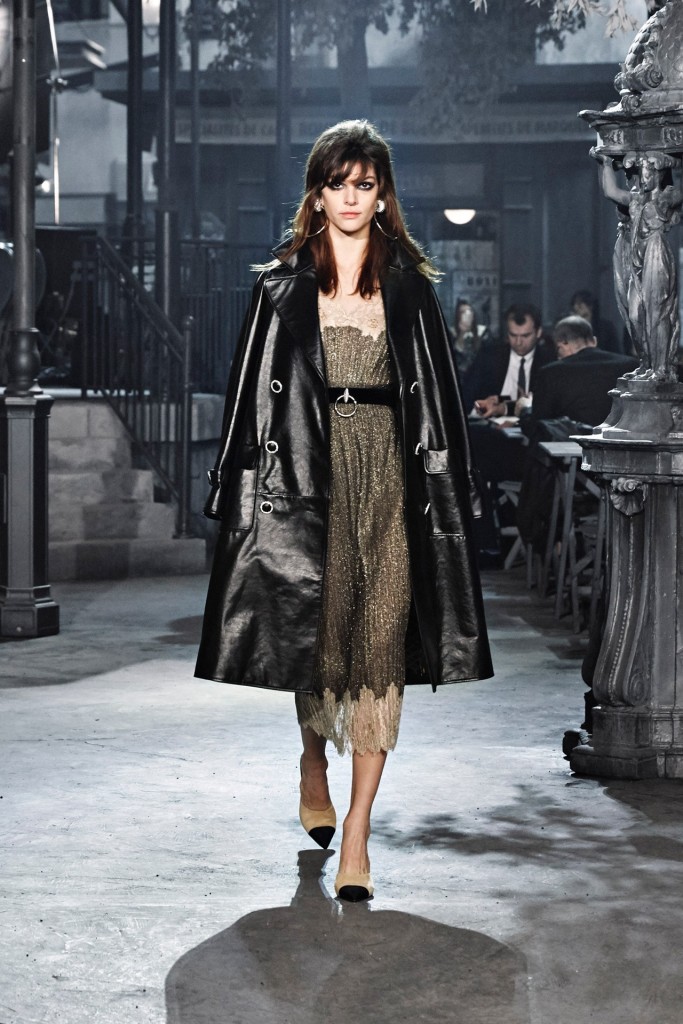 The massacre in Paris turned this collection, already wistfully passéiste, into film noir. There was so much black, the French badge of  elegance. And such a post-war feeling to the knitted sweaters (in fact marvels of stitch craft), the cape shoulders and long, pleated skirts.

Even the set itself, so brilliantly conceived and executed, was an uncomfortable reminder of a cloistered Parisian world. There were no Moroccan restaurants, no Middle Eastern bakeries, no multicultural waiters. Nor anything but Franco-Italian glam to the models, who came on to the runway out of a Parisian metro entrance.

Removing all these complex issues, how were the clothes? Wistfully polite, extraordinarily produced and occasionally a hit.

As ever at Chanel, the accessories were exceptional, especially the bootees made from strands of pearls and those polite two tone mules which turned to reveal a snake twisted around a pearl on the heel. A new square bag and the lacy hose looked like instant success stories.

Somewhere in this Chanel presentation there was a powerful story about German-born Karl’s insider-outsider tale of two cities. But it was never quite realised in black and white. 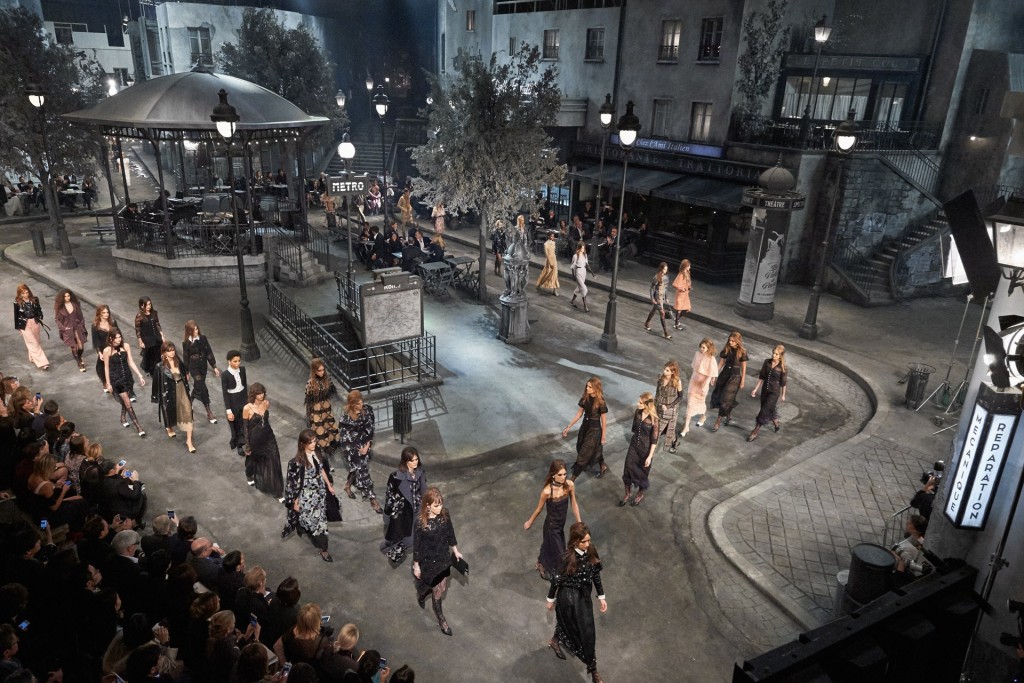 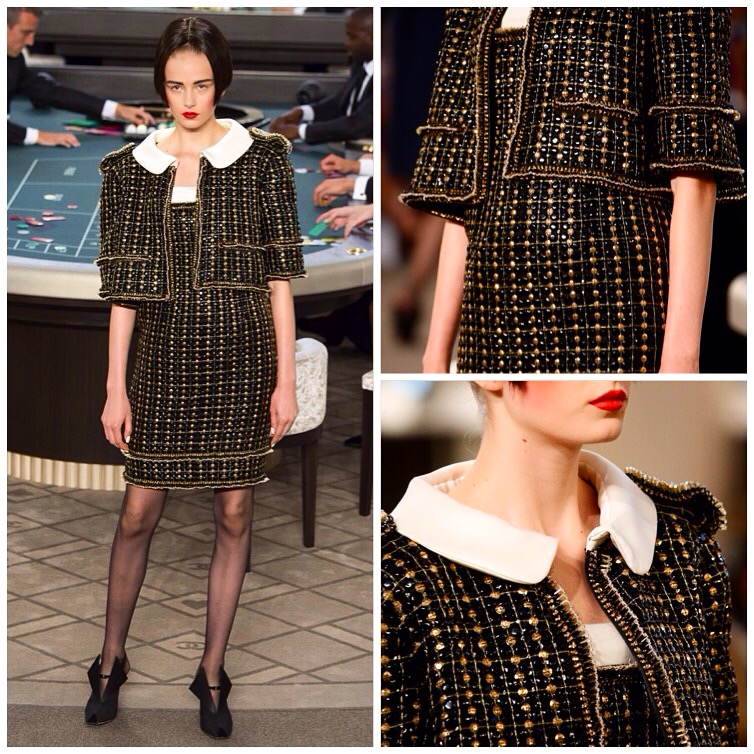 There were two shows going on at  Chanel couture offering. The first was a demonstration of fine jewellery of the kind only Karl Lagerfeld could pull off. The second was his couture collection.

In the centre of the room was placed the Chanel Casino where a very select group of gamblers made their bets on the roulette wheel and Blackjack. Lara Stone and Julianne Moore, Lily-Rose Depp and her mother Vanessa Paradis, Kristen Stewart and Geraldine Chaplin sat in outfits specifically designed for their personalities and to show off the amazing Chanel diamonds as they played the tables. Around them patrolled an army of geometric slanting bob-haired models, their kabuki-style make-up and wigs making them an identikit crowd in contrast to the individual style of the gamblers.

This season’s couture offering majored in tailoring with the star pieces being 3D versions of the famous Chanel jacket and skirt. Light as balloons and standing away from the body, they looked as if they were created from the fabric of the future.

Lagerfeld followed with a collection of jackets and coats made from light wools with dramatic broad shoulders exaggerated by epaulettes, while collars were high and often doubled, standing away from the neck, their sleeves wide and cropped at the elbow.

Eveningwear was as one would expect: a delicious confection of sharp lines mixed with layered tulle and feathers. Hems slanted like the girls’ wigs, from back to front in an unusual take on asymmetry. And when the bride in the shape of Kendall Jenner arrived, she was wearing a double-breasted white satin trouser suit with a trailing tulle hem. 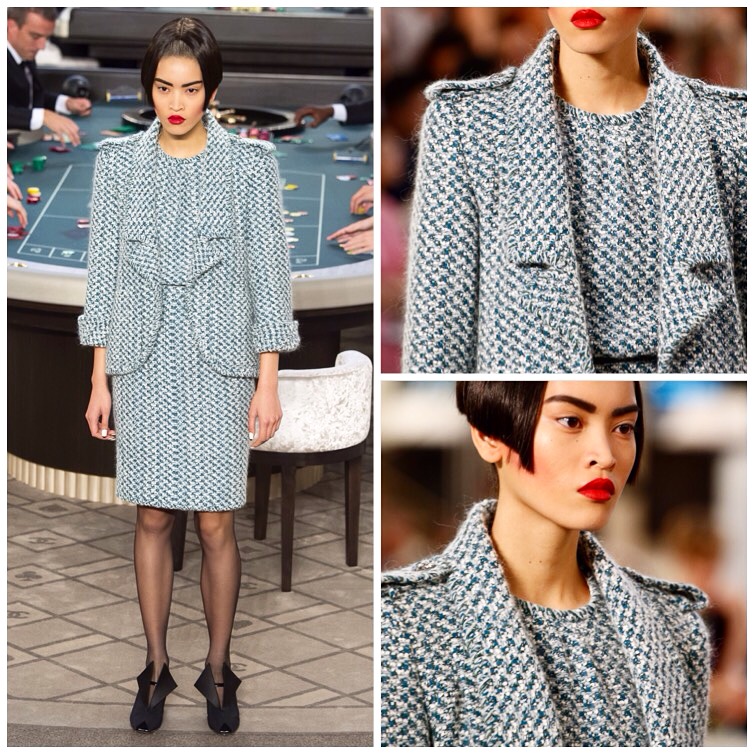 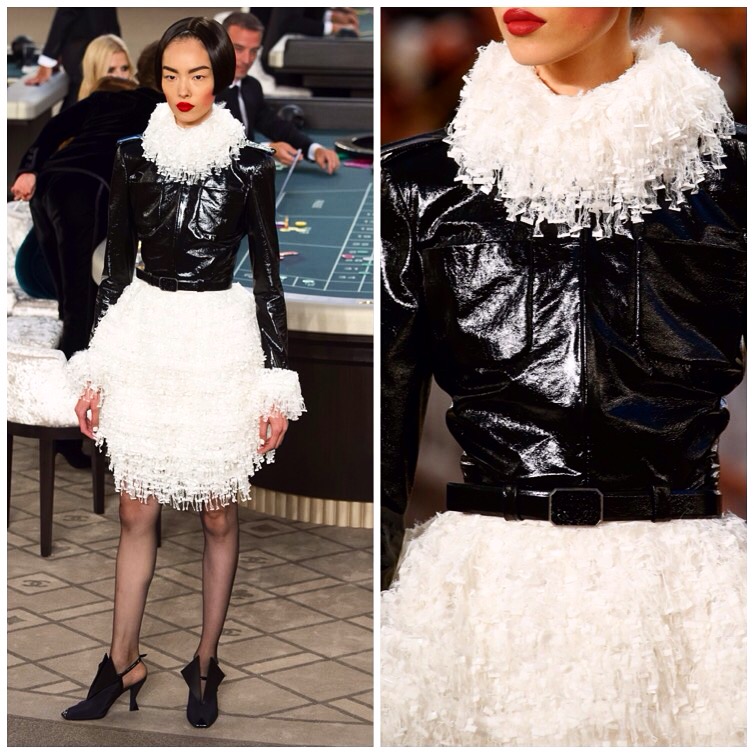 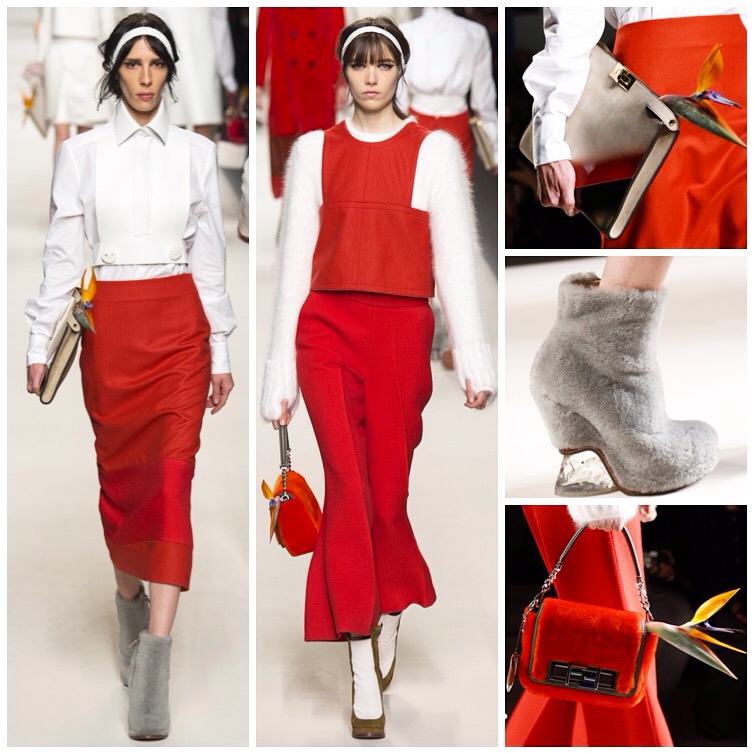 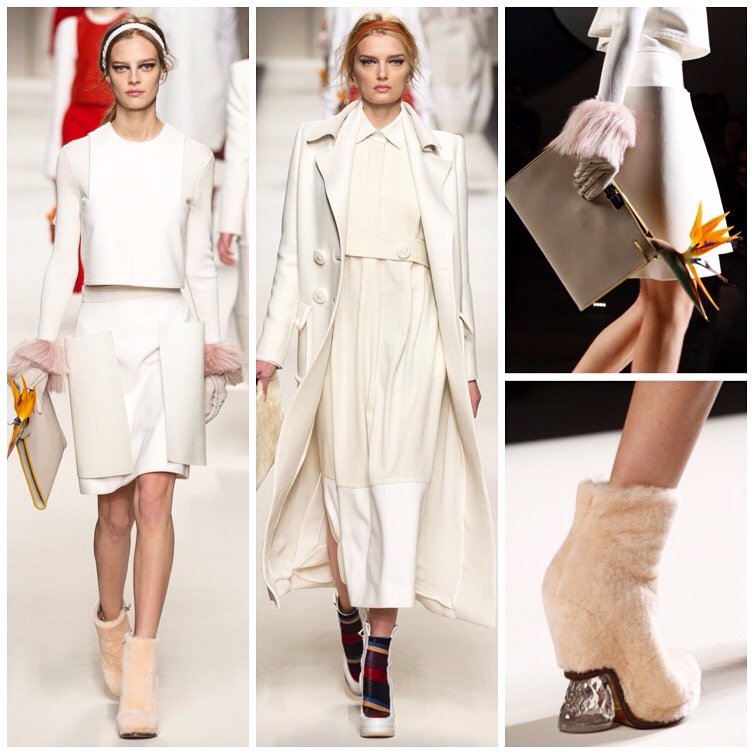 The Good Life met The Royal Tenenbaums for a Fendi collection that went into the garden and unearthed its hidden glamour. Who knew Karl Lagerfeld had such green fingers?

And so out came his parade of flower pot women in their dungaree-riffing or pinafore dresses, stiff and straight, or apron-pocket leather skirts – ideal to keep one’s life in when one of the label’s roomy handbags, clutches or mini purses isn’t to hand. But when they are, as today, they should be styled with a single stem flower poking out – a new proposition to rival that of Fendi’s ever popular key chain adornments, perhaps. But certainly a styling detail Fendi fans will love – and adopt.

There were impeccably cut long coats (and lots of them) of patchwork panels in tan, chocolate and black; there were fur ones too (cue Margot Tenenbaum); boots with wedge heels that curved back on themselves; and key chains to replicate the cylindrical and colour-blocked invitations.

Quilted puffa jackets got a serious outing (long and short), an idea which extended to strapless cocktail-style dresses, so that even on a fancy night out you’d still stay warm in the hands of Fendi. The coats themselves put forward an easier solution for getting out of bed come winter if stepping into one of these was an option – from one duvet to another.

But just as much as there was a practically – in terms of references and execution – there was sophistication. It is Fendi, after all. Leather headbands to pull back gently teased hair; elbow-length gloves that fringed into fuzz; essentially ways to segue the outdoors indoors and vice versa. 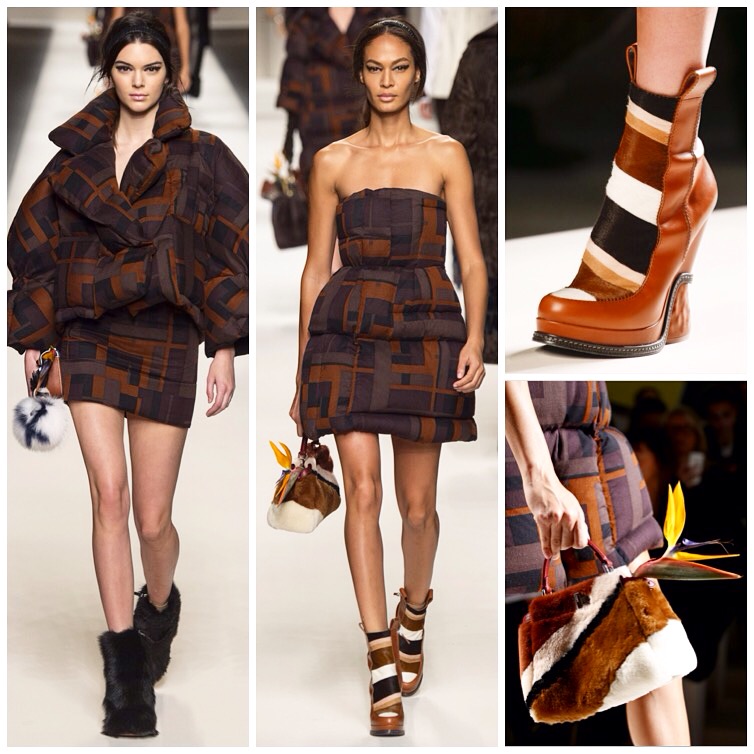 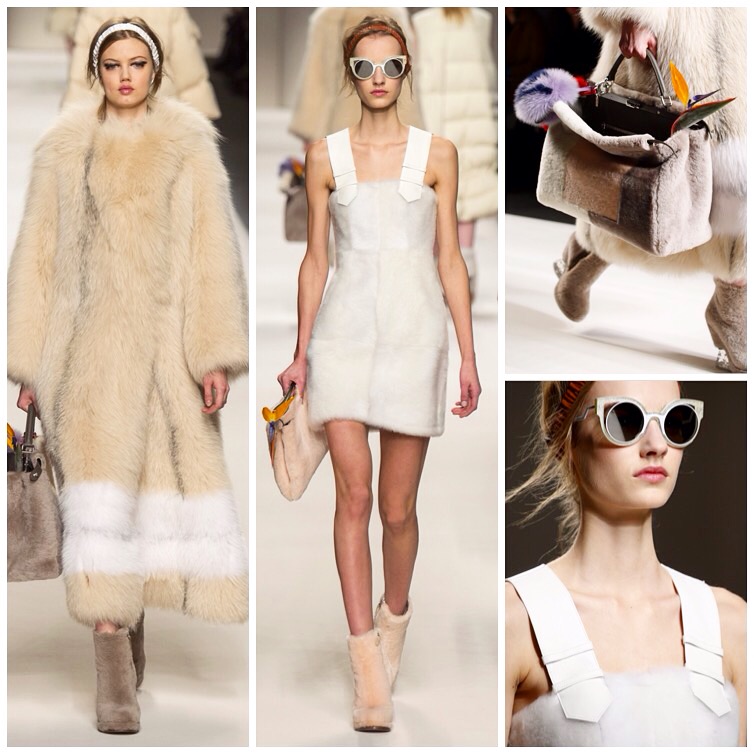