Word to the wise: no one feels fun and festive in an itchy acrylic sweater with 3D felt antlers.

The Christmas sweater of 2015 is an altogether more appealing proposition: the Aran knit. That deliciously cosy, creamy coloured cable-knitted sweater that whispers good taste – and this season no cold-winter wardrobe should be without one. “It has stood the test of time because it’s chic and practical,” says Michael Kors, who included  an Aran with elbow-length sleeves and a sweet Peter Pan collar on  his autumn catwalk. “When the temperature dips, everyone wants a knit that looks good and feels amazing. The Aran is a lasting  design of beautiful craftsmanship and texture; it’s universally flattering and is incredibly versatile, too; it works well with almost anything.” 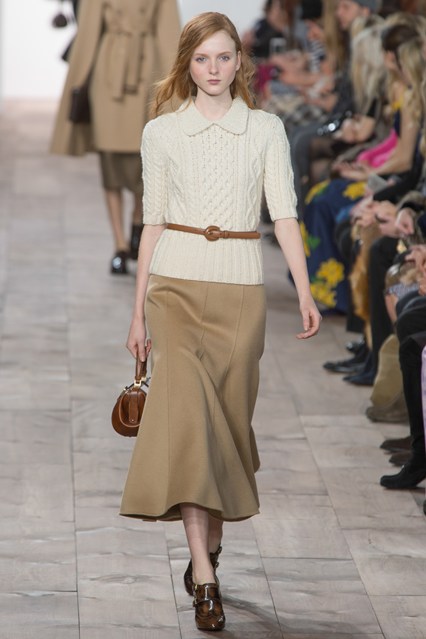 A brief history: the Aran sweater dates back to 1892 and takes its  name from the Aran Islands off the west coast of Ireland. Traditionally knitted by the wives of fishermen to keep their husbands warm and dry at sea (they are usually made from 100 per cent wool that retains its natural lanolin, making it water resistant), the various patterns signified the village where the fishermen came from. Also, every weave relates to the fishing world: the cable indicates a fisherman’s ropes; the honeycomb knit symbolises the hard-working bee; the basket weave represents a basket brimming with a bountiful catch; the zigzag stitch recalls the twisting pathways along the cliffs; and the diamond design is a sign of wealth and prosperity. Years later, the style crossed the Atlantic to Hollywood, where Aran sweaters soared in popularity during the Fifties and Sixties, endorsed by Steve McQueen and Grace Kelly.

The knitting needles went into overdrive this season. Arans were everywhere: spotted at Valentino, where creamy, slouchy styles boasted a graphic black triangle intarsia; at Altuzarra they took on a shade of dove grey and were tucked into racy pencil skirts; while over at Max Mara, toffee-coloured and oversized styles proved just the ticket under one of the house’s famous camel coats. There were highly worked styles, too, like those at Alexander Wang – the cool girl’s Aran – which were studded and threaded with silver chain; at Delpozo, where Josep Font whipped up a masterpiece bursting with shaggy fringe and woolly coral-like curls; and over at Sacai, where Chitose Abe concocted something entirely new from the humble Aran knit, splicing hers with crisp white cotton shirting and elongating the style into a sweet kick-skirted sweater dress. But if it’s tradition you’re after, look no further than & Daughter, the family-run luxury knitwear label set up by former fashion PR Buffy Reid and her father, which offers several Aran styles, from shrunken to outsize to patchwork, all in 100 per cent British wool yarn  and made in Ireland. 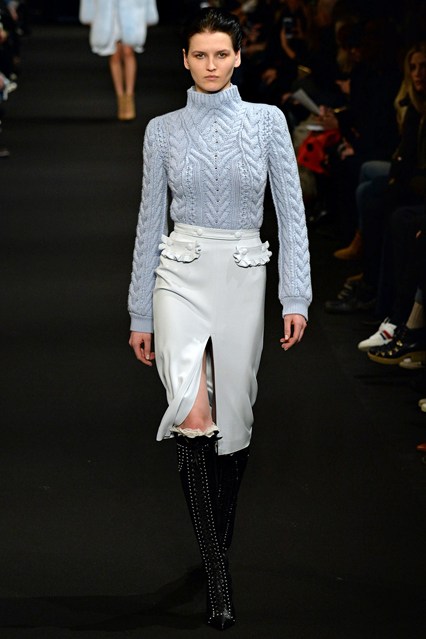 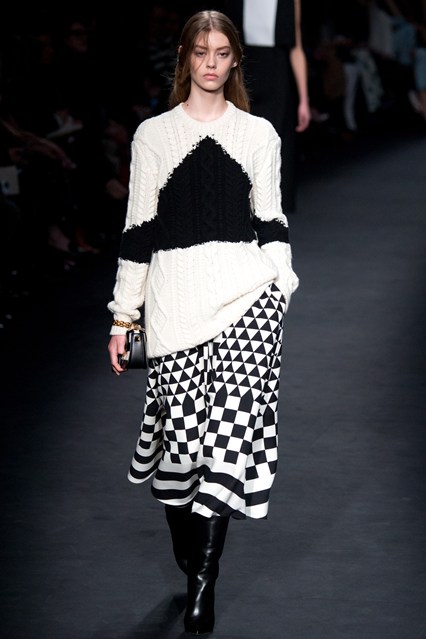 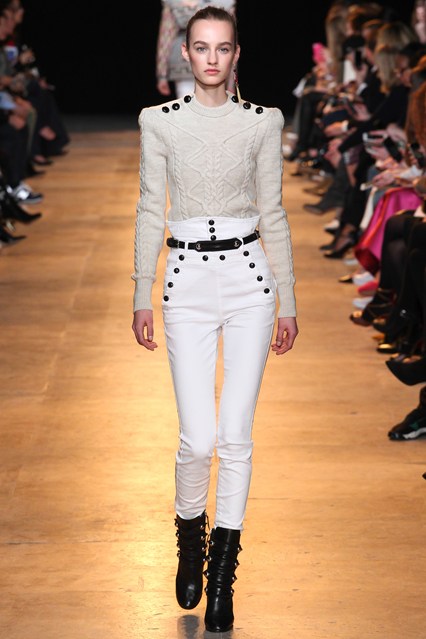 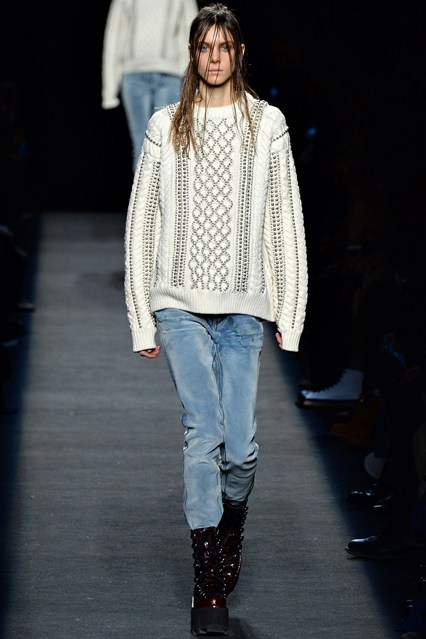 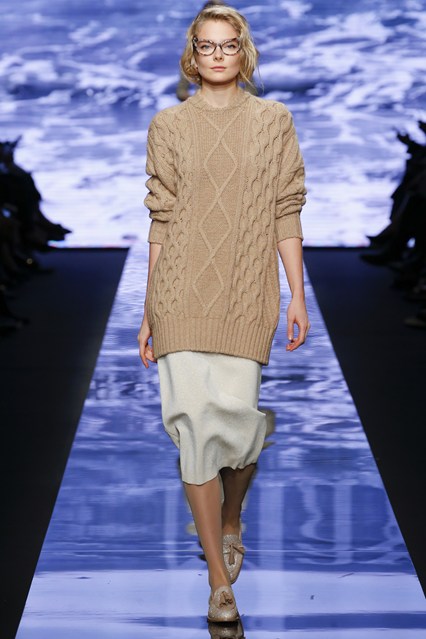 “There are iconic garments such as blue jeans, the white T-shirt and military jacket that are so well achieved you will never tire of them, and the Aran knit belongs to that category,” says Isabel Marant, continuing, “I love its efficiency; it’s warm, comfortable and made out of rough wool that lasts for ages.” Her redux this season takes shape as a shrunken sailor sweater complete with glossy black shoulder buttons. “My mother has always hand-knitted. Since I was a child she knitted me amazing Aran sweaters. I still have some of them and they still inspire me.”

Nostalgia chimes with other designers, too. “During my late teens I would steal my father’s original Aran sweater,” says Louise Trotter, creative director at Joseph. “It was hand-knitted, heavy and slightly scratchy, but it could be styled with everything. Although my father is no longer here, his Aran sweater  is one of my few keepsakes. It’s  still in my wardrobe 20 years later,  a cherished piece waiting to be passed down to my daughter.”

Head to Joseph and you will find Louise’s latest design, which takes shape as a deconstructed layered patchwork piece complete with cables, cardigan stitch (a Joseph original) and stretched-out sleeves for a borrowed-from-the-boyfriend vibe. “Personally I can’t wait to wear it,” she adds. “It will be my winter comfort blanket.”