IT was a collection about stepping back in time to the Seventies today for the Siblng crew, Jo Bates, Sid Bryan and Cozette McCreery. The trio – who
launched their fun-filled knitwear label back in 2008 and have quickly established themselves as a must-see show on the fashion week schedule – drew upon their childhood memories, the music of their teens and, for them, a spirit of Ireland for autumn/winter 2014.

All of this translated into bejewelled drop-waisted denim, colourful crochet, gothic tangled webs of trailing knit (which caused more than a little problem to walk in; one model determinedly taking off her shoes to make it down the catwalk), floppy-brimmed hats and rose-embroidered detail. It was a gothic hippy tale, with something a little witchy in those hats. And the wardrobe malfunction only served to endear showgoers some more, whistling and cheering as everyone did as the shoes were kicked out of the way for the finale by a fellow model. 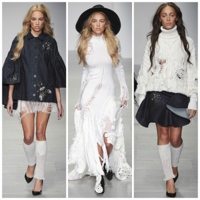 JACK MCCOLLOUGH and Lazaro Hernandez have for the past few seasons moved away from the print and colour upon which they had originally made their Proenza Schouler name – a move that served them well for an especially accomplished spring/summer 2014 offering – but tonight they brought it back for a collection that was energising, fun and fast-paced (even as we waited for the show to begin, the room was alight with orange fluorescent colour-distorting tubing).

Backstage, the boys – who celebrated a decade in fashion last year and are part of the Vogue Festival line-up for 2014 – spoke about the importance of humour, fun and not overthinking things. Essentially, all of those important character traits that come to fruition from experience – and later lead to confidence.

And this was a confident and slick collection – big on structure with jackets curving around the body and into peplums, large sloping shoulders above stiff A-line skirts or what fell into longer lengths of coat, trousers worn beneath. Vivid glitter and monochrome safari prints that ran from frenetic zebra stripes to giraffe spots and sat atop spongy jacquards – it was hourglass-soft in silhouette, but anything but when it came to those zingy surfaces, which literally sprung from the garments, padded as they were. 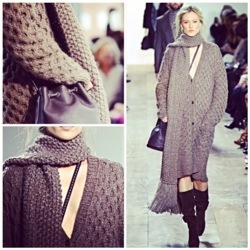 Michael Kors is a billionaire don’t you know, but that doesn’t mean his feet aren’t still very much on the ground – in fact that’s probably what has made him the man with all the money.

“I’m a big city guy,” said the designer, elaborating that it’s still seeing real people on the streets of New York that inspires him. For this collection, he combined that with a dose of charm and romanticism for a renewed sense of luxury living – the clothes were as casual as they were dressed up. “The whole show is really about convergence. Why do you want to wait until the Academy Awards to wear beautiful embroidery?” And with that he gave us chiffon for day, and a blouse and trousers for night.

It was about turning things on their head but keeping them supremely luxurious all the way.