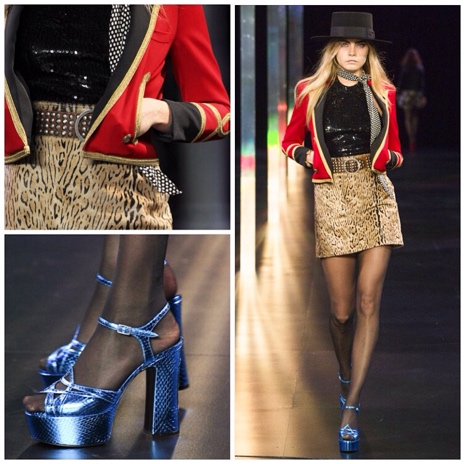 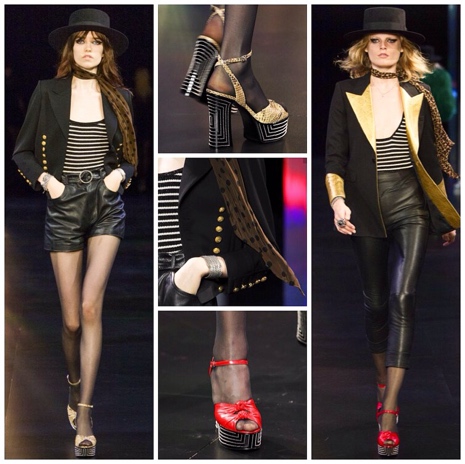 His little black book that serves as the show invitation featured a catalogue of works by Robert Heinecken, the American artist best known for his appropriation of imagery – sometimes pornographic – from magazines and packaging. It’s an area that clearly interests Slimane, remember, last autumn/winter, it was John Baldessari another artist of the same ilk whose images featured on these pages.

There is something of that in Slimane – ok, less of the pornographic, perhaps (but there is no denying his girl has edge) – but the designer certainly has a knack of taking all the good bits of what’s gone before and re-proposing them as new ideas for now.

There were 55 looks here, and every one will be poured over by his coterie of fans. From the opening cherry printed one-shouldered fluttery dress – not entirely romantic when teamed with ‘cheap’ 10-denier tights – to the black leather coat, micro tan suede jacket with popper fastening (and a host of other cropped leather jackets, all updates to his hit fringed numbers that sold like hot cakes – despite the price tag circling a figure of £2500) to the camo army jackets, pinstripe blazers, denim hot pants and star print mini dresses. Girls – and women – will want it all. No, there wasn’t anything that we hadn’t ever seen before but it didn’t matter, because it all felt terrifically right again – yes, even those cheap tights – and isn’t it that that matters? 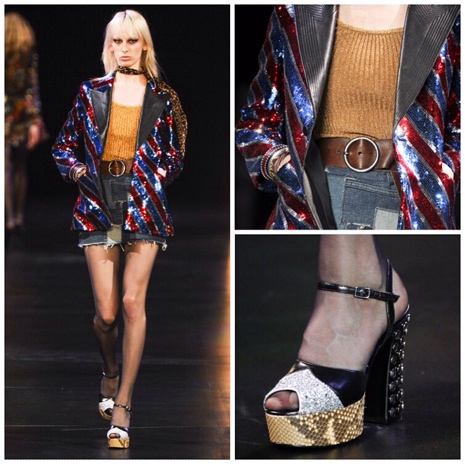 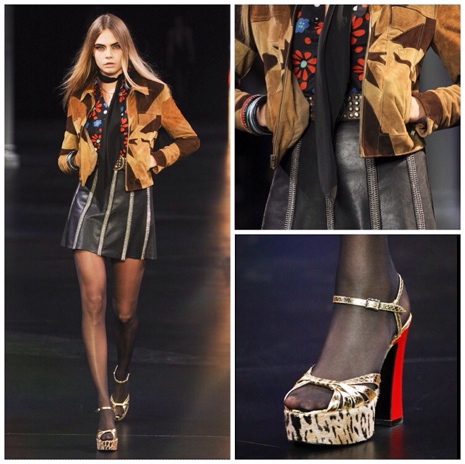 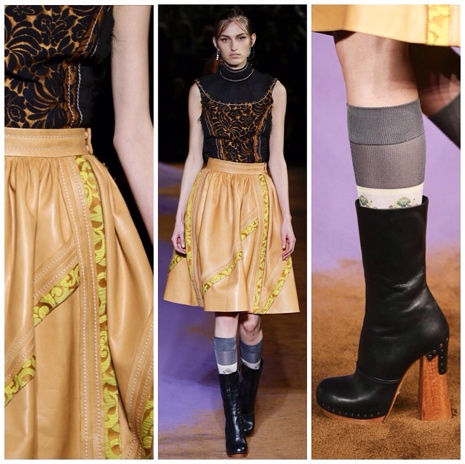 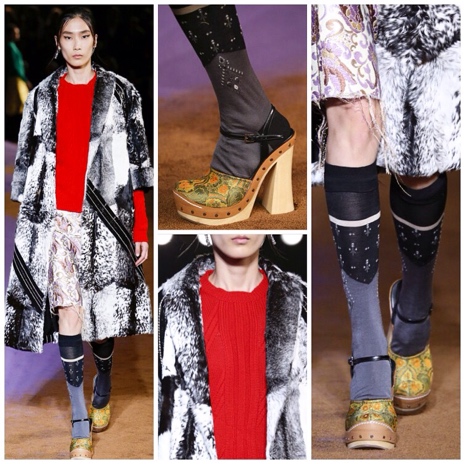 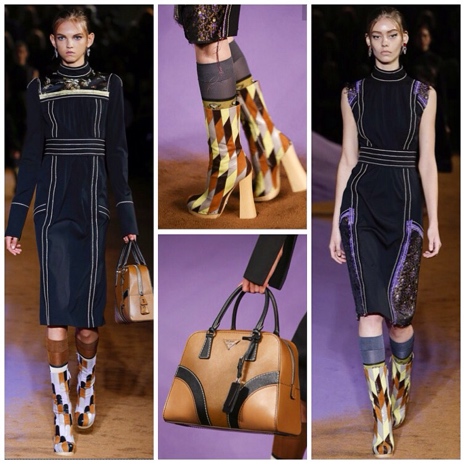 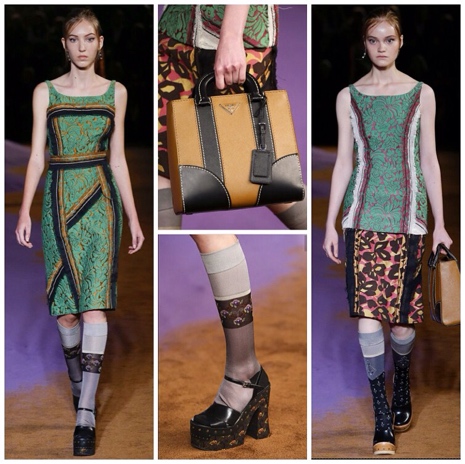 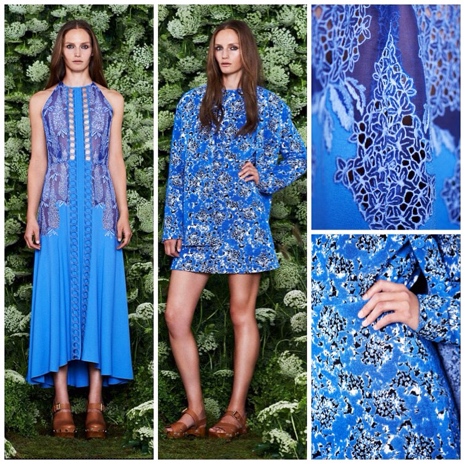 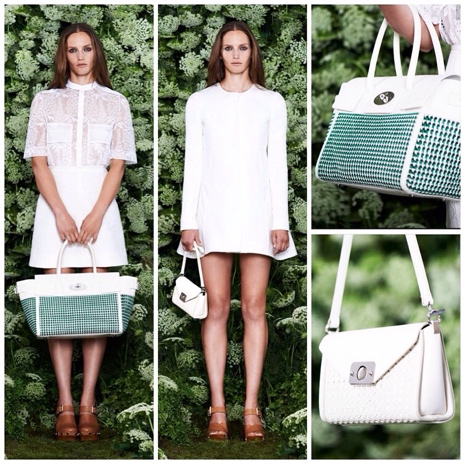 MULBERRY might still be without an official captain at the helm following the departure of Emma Hill last year but that doesn’t seem to be causing it any problem. In fact, the luxury fashion label is very much embracing this as time to redefine and work out what it’s all about, go back to its rich heritage, rekindle that British charm and make it modern and youthful – and all with Fran Stringer, head of ready-to-wear design, leading the way.

And while last season we had the distraction of Cara Delevingne’s new bag line over any clothes, that was set right – something that started with the pre-collection earlier this year. Kew Gardens continued to be inspiration, only this time – as Stringer noted – with the addition of some “hero flowers”. Mulberry is back in bloom and an English country garden very much its motivation.

So what do you need to know? Well delphiniums are the flower of choice – featuring as blown up illustration prints on elegant any-occasion dresses or as lacework on blouses; gardening clogs are no longer only for the home, rendered here in colourful jacquard; trellis is cool – worked into perforated leather jackets and dresses; parkas are de rigueur; grandad cardigans can bring sparkle to any outfit, because here with glitter they do; and one bag can actually be six. Yep, you read right.

The Delphie is the bag to note – a clutch, a handbag, a satchel, or all and any of the above, the idea here is catering for multiple occasions by lengthening magic straps and unbuttoning the front fold to reveal a new colour or fabrication and thus a new bag. Impressive stuff – and ideally catering for today’s time-poor but style-seeking folk.

And that, in fact, is the overall crux of this collection: parkas over pretty dresses; outfits for the British summer social calendar (think the arts, the Serpentine), utilitarian but romantic with it – how to straddle today’s dress codes. But make them appropriately “Mulberry” too.

A final note for those wondering if it was the day for the grand creative director reveal – no. 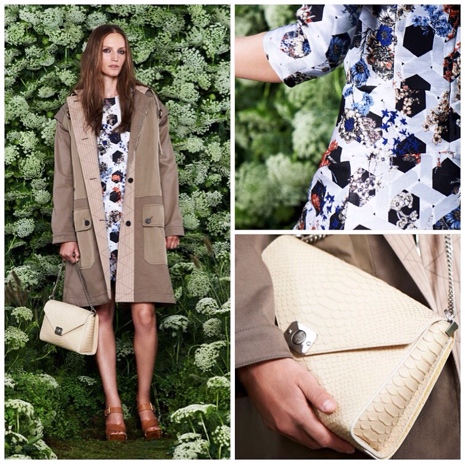 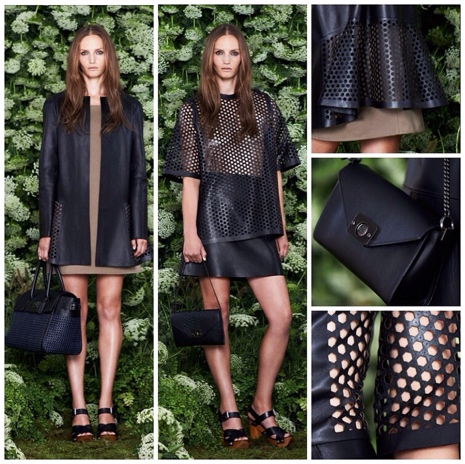 To shop more Mulberry visit: www.mulberry.com or click below to shop the latest Spring/Summer 2015 collection: 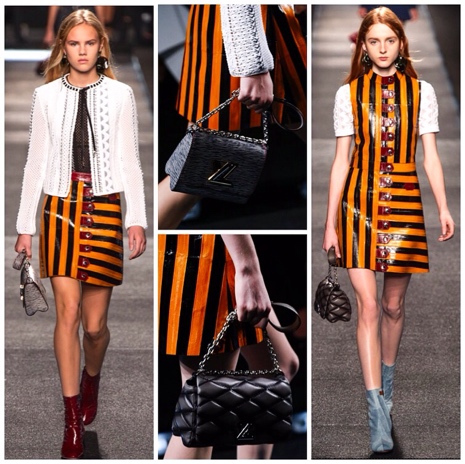 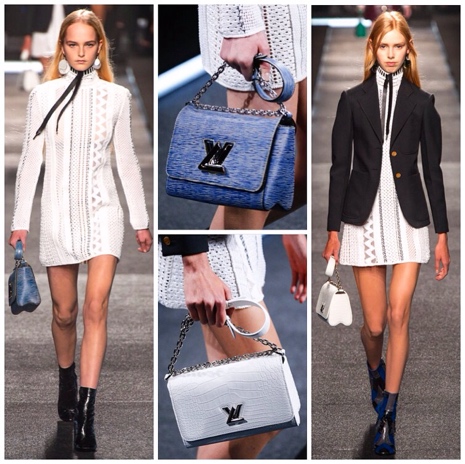 IN truth, Nicolas Ghesquiére had us at hello. Everything surrounding Louis Vuitton show was nothing short of spectacular. It began with the awe-inspiring sight of the new Louis Vuitton Foundation, a Frank Gehry-designed curvaceous mega space in Paris’s Bois de Boulogne that gleaned in the morning sunlight atop a rippling pond like a gargantuan spaceship. The sight of it might just be the most Instagrammed picture of the entire season.

Show goers meandered their way around it, snapping from every angle before making their way downstairs through a maze of open-mirrored corridors and into its dark basement with walls of transparent screens, its runway lit by nothing more than the strong beams of spotlight rows (stand in one and you might just be beamed up to somewhere else on planet Louis Vuitton).

It turned out, those transparent screens were projectors where models’ faces appeared to deliver a welcome monologue, describing the Foundation as a “ship surrounded by a woodland” and ending it with, “the journey starts here”. It all felt eerily sci-fi. With that, Simon and Garfunkel’s Sounds of Silence played out and Londoner Jean Campbell emerged.

Ghesquiére built on his girl of last season, with a collection that skimmed from preppy to Americana to Seventies. This cool retro A-line silhouette continued, now pieced together in diagonal stripes of navy and red eel skin. It developed into a tapestry-printed velvet line up of cropped flares and quilted biker jackets, button-bibbed white woven dresses and others covered in black micro sequins. There were so many desirable separates; belted cargo jackets, raw indigo denim jeans with just enough interest going on with the seaming, and white leather trousers printed in all kinds of matter, from matchstick boxes to hairdryers to headphones.

The bags also got a starring role here today: a denim-looking leather purse with chain strap, and stonking clasp mechanism; the new LV logo (the very same one shines like a beacon from outside the Foundation in hammered silver) is the one to covet now.

Ghesquiére cemented his arrival at this house and confidently swept his audience up in the bold new direction in which he’s steering this mothership, the jewel in the LVMH crown. We were all aboard, and then some. The music, the venue, the casting, the believability of these clothes, his girl, the execution of it all combined, arguably made it the show of the season. 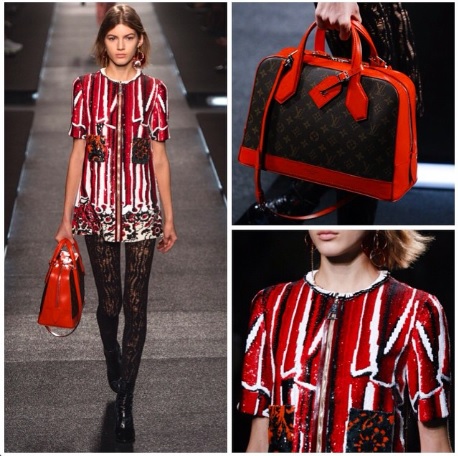 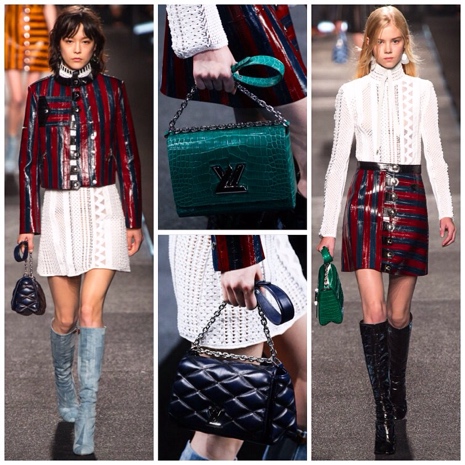