Although genuine innovation in fashion advertising remains rare, the need to attract the wandering eyes of today’s distracted, media-saturated consumers prompted some bold moves this season as brands sought to cut through the noise and differentiate themselves with unexpected, high-impact visual messaging.

From Louis Vuitton’s casting of the bubblegum-pink-haired protagonist of Final Fantasy XIII, cannily co-opting her multi-million-strong fanbase, to J.W. Anderson’s use of a photograph that was literally postage stamp-sized, brands challenged convention with their approaches.

The most successful campaigns acted as springboards for digital conversations. At Gucci, Glen Luchford shot another fashion film to accompany his offbeat tableaux shot in Berlin, while Marc Jacobs waded into the hot topic of gender politics by casting Lana Wachowski and a contestant from RuPaul’s drag race in his campaign. The message was abundantly clear: print campaigns may live in magazines, but the digital buzz they create is the real currency.

My Top 5 Campaign of S/S 2016 thanks to the Business of Fashion:

The East African savanna forms the backdrop for Valentino’s latest collection. Creative directors Pierpaolo Piccioli and Maria Grazia Chiuri asked National Geographic legend Steve McCurry — known for his world-famous portrait “The Afghan Girl” — to turn his lens on Kenya’s Amboseli National Park as models wearing tribal inflected ready-to-wear posed under acacias and stood sentinel among leaping Masai tribespeople. The collection had sparked controversy in October after the designers were accused of cultural appropriation through the use of predominantly white models sporting cornrows and tribal-inspired garments. Simultaneously, however, it reminds us of the long-standing dialogue between fashion and the continent, which goes back as far as Saint Laurent’s animal prints in the 1960s, Iman’s arrival on the catwalk in the 1980s and Demi Moore standing next to a giraffe on the cover of the April 2010 issue of US Harper’s Bazaar. 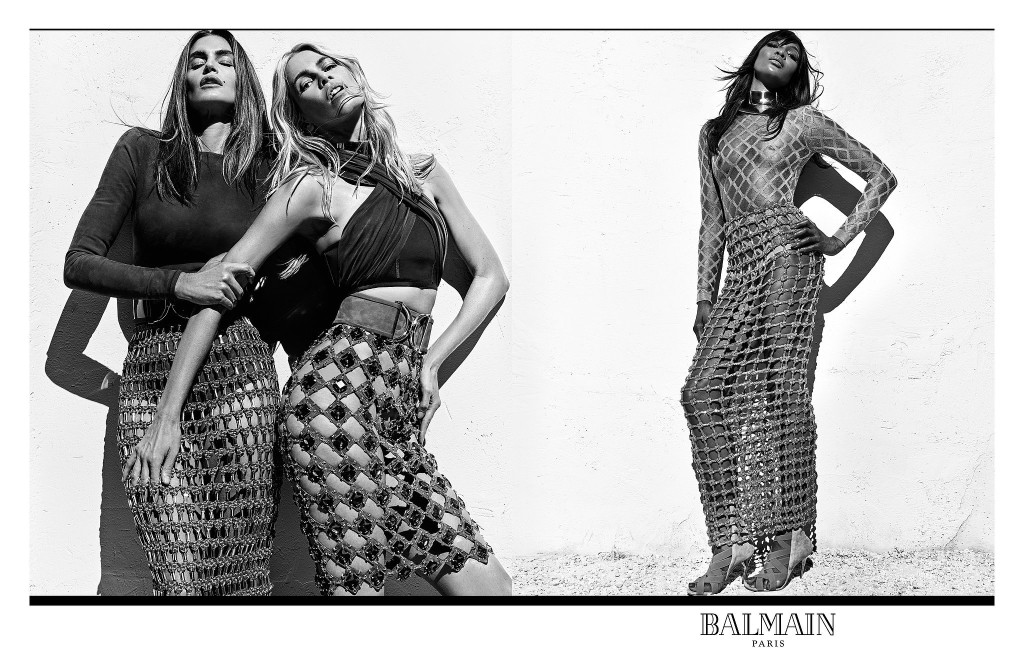 Creative director Olivier Rousteing has bolstered the ranks of his Balmain army, recruiting three original supers who don’t need a surname. Dismissing the Kardashian clan but none of the trademark gloss, Claudia, Cindy and Naomi are captured in monochrome by Steven Klein with creative direction from Pascal Dangin. Rousteing released the images through his personal Instagram consisting of 2.2 million followers with the hashtag #thisisHISTORY, making a point that the campaign would be the first chapter in the brands’ efforts to go back to its roots. 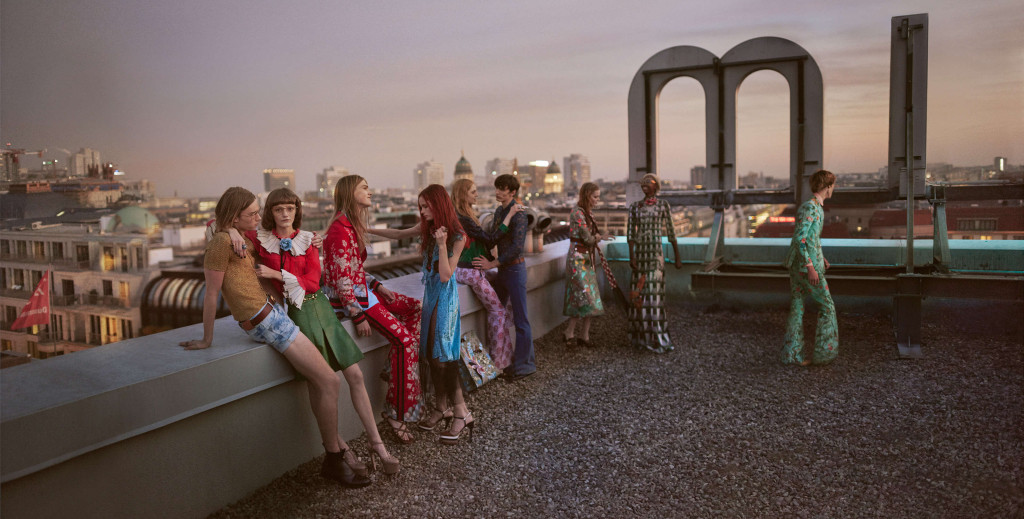 How do you top a campaign that was heralded as last season’s very best? Do it again in Berlin was creative director Alessandro Michele’s answer as he faces the pressure to build on the momentum he gained by reviving the brand last year. Shot once again by Glen Luchford, the most alluring scene from the series is a party on a Berlin rooftop, suffused in langour and glamour. As the sun sets and the eccentric characters sashay about, the spectator is sucked into a 1970s fantasy world, desperate for an invite. Elsewhere in the campaign, night owls take the subway and hang out in club toilets; one even goes skateboarding with a peacock under her arm. Sumptuous, surreal and effortlessly cool, it’s another winner from the Italian house whose star is very much in the ascendant. 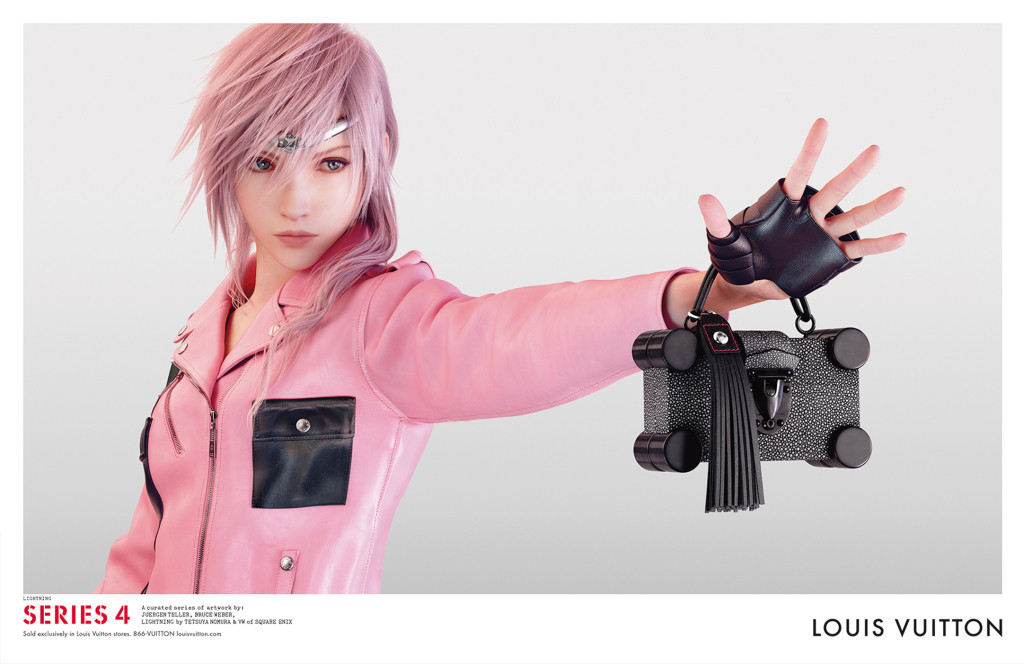 Louis Vuitton has taken the bold step of casting a CGI heroine in its latest campaign. By including Lightening from Final Fantasy XIII, the French brand ventures into the virtual world of anime and invites a double-take as the eye is drawn to the suspiciously unblemished, pink-haired model holding up a Petit-Malle bag. The brand worked in collaboration with character designer Tetsuya Nomura and Japanese video game developer Square Enix on the campaign, which also features Jaden Smith among other Vuitton vixens, shot by Bruce Weber. 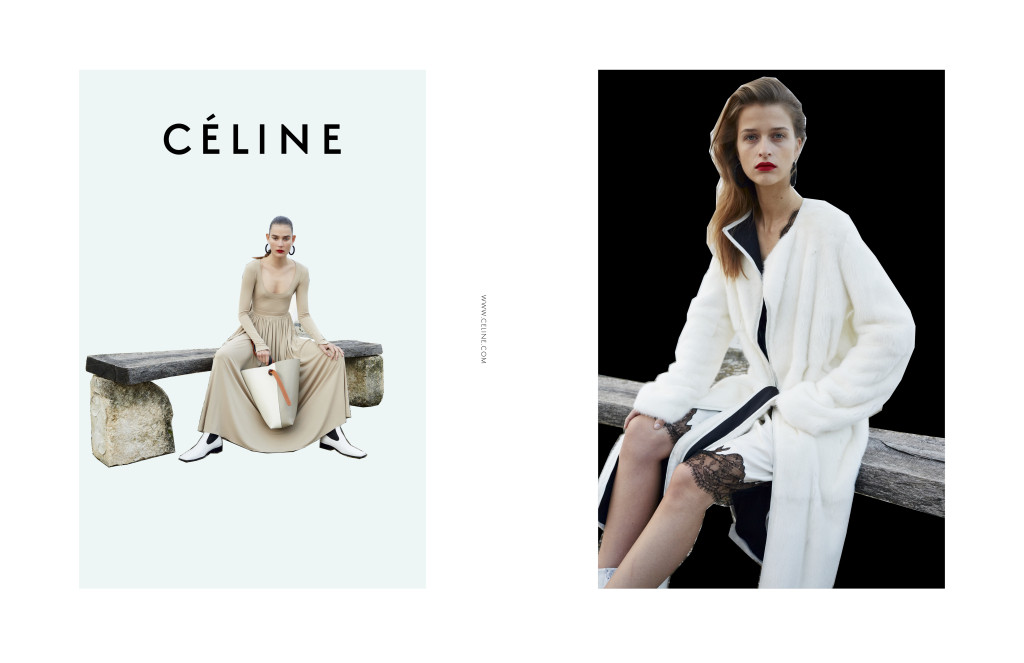 Creative director Phoebe Philo once again called on Juergen Teller for the latest Céline campaign. Starring new faces Vera van Erp and Regitze Christensen along with last season’s Karly Loyce, the models were cut out and set against coloured backdrops creating a scrap-book like collage. Following on from her Spring/Summer 2016 collection, when Philo was inspired by everything the Céline woman might need for a year-long trip, the campaign underscores the evolution of who that woman is. After that show, Philo said she imagined the Céline woman leaving the city, putting her feet in the sand, being in nature. The confident, unselfconscious women of this campaign, clothed in softer, freer lines than the stark minimalism once synonymous with Céline, appear ready to do just that.

What is your favourite campaign of Spring/Summer 2016?

Let me know in the comments section below…

With 17 international labels – including Versace, Marni and Karl Lagerfeld – already having come on board, H&M’s designer collaboration is one of the most eagerly anticipated events in the fashion calendar. Queues snake around the block on the morning a new collaboration drops into stores and the collection itself will sell out within hours – it was claimed that the Versace collaboration sold out in 30 minutes.

And now the 18th tie-up has been announced and it is perhaps the most intriguing so far. Balmain is most famous for its beautifully crafted (and eye-wateringly expensive) haute couture pieces and so is perhaps not the first label most people would imagine partnering with the mighty Swedes. But the result might surprise you.

We’ve already gotten quite a few sneak peeks at the hyped-up Balmain for H&M collaboration. Kendall Jenner and Jourdan Dunn wore pieces from collection to the Billboard Music Awards back in May, followed by the release of an ad campaign with Gigi Hadid in September. The lookbook was released officially last week — but not before someone leaked its contents on Instagram.

Well now, the mystery is over. We got our hands on images of every last piece that will be for sale when the collaboration hits stores on Nov. 5th. This is not H&M’s cheapest collaboration, with a few items surpassing the £300 mark.

I’m especially sorry to say it, but this ‘limited edition’ embellished dress worn by Gigi Hadid to a NYFW party. Price tag: £399.99.

But there are still plenty of items under £100 for those with champagne taste on a beer budget, or, you know, Balmain taste on an H&M budget.

Prepare to fall in love with Olivier Rousteing

At just 29 years-old and already the creative director of an established fashion house, Olivier Rousteing is a trailblazer in the fashion industry – and he’s also extremely lovable. In the latest interview clip released by H&M in anticipation of the collaboration launch he speaks about what fashion means to him. “I was in an orphange, I didn’t know my parents,” he says.
“…so I always used clothes to actually identify myself. When you wear clothes, you create a world, you create your own world. I think Balmain today is a vision of the new world.”

“I think confidence is the most important thing. But also I think sexy and powerful,” he adds. “I think Balmain DNA is all about unique, and I can’t express how much I’m so excited and how much I enjoy it.”

What is most delightful about Rousteing, as comes across in this clip, is his love of fashion – he doesn’t take it too seriously, and that’s exactly what it should be about. (It also helps that he has cheekbones that could slice ice and a pout to make Rosie Huntington-Whiteley jealous, of course.) Anyway, prepare to see a lot more of this young man over the coming months and to love him a little bit more each time.

So here it is – Your Balmation Collaboration: 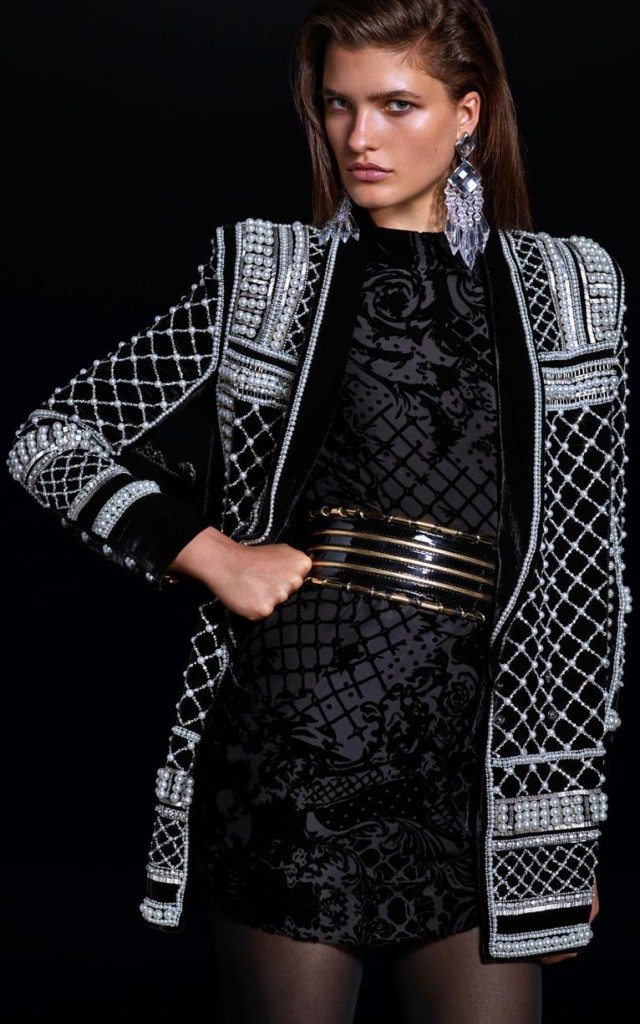 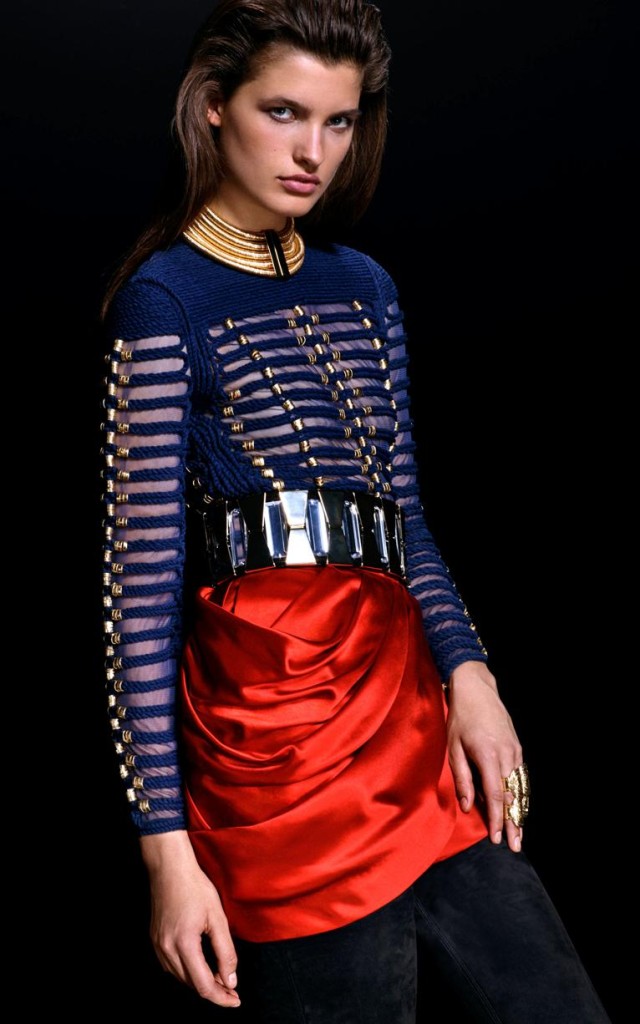 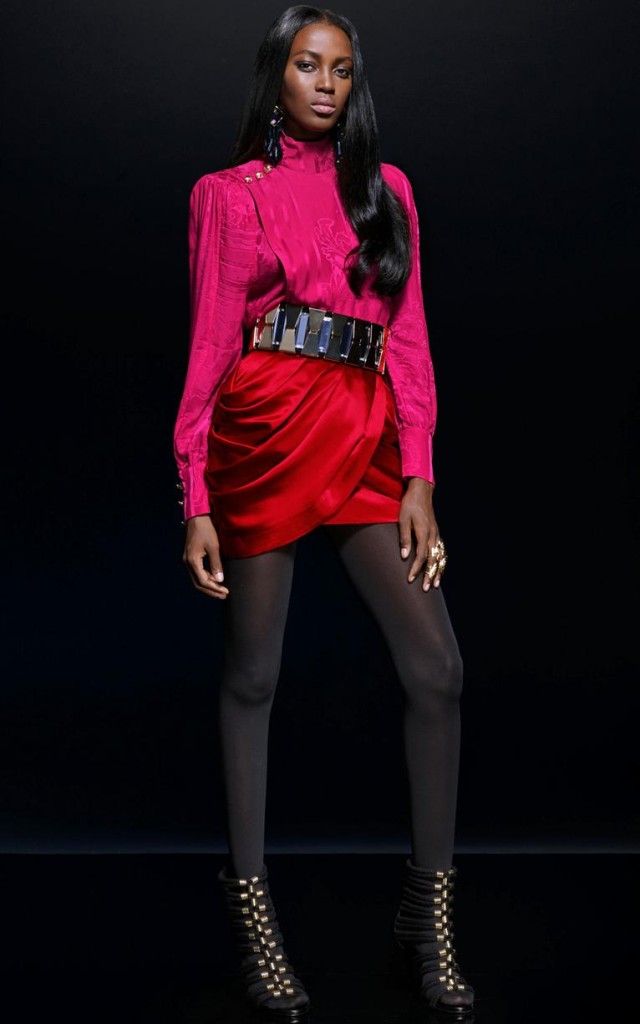 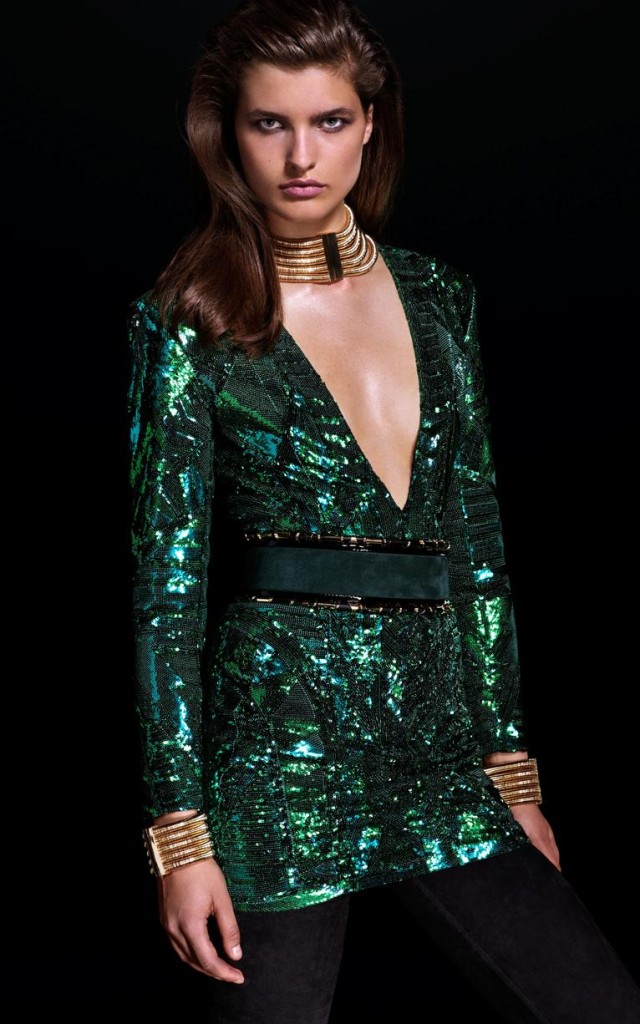 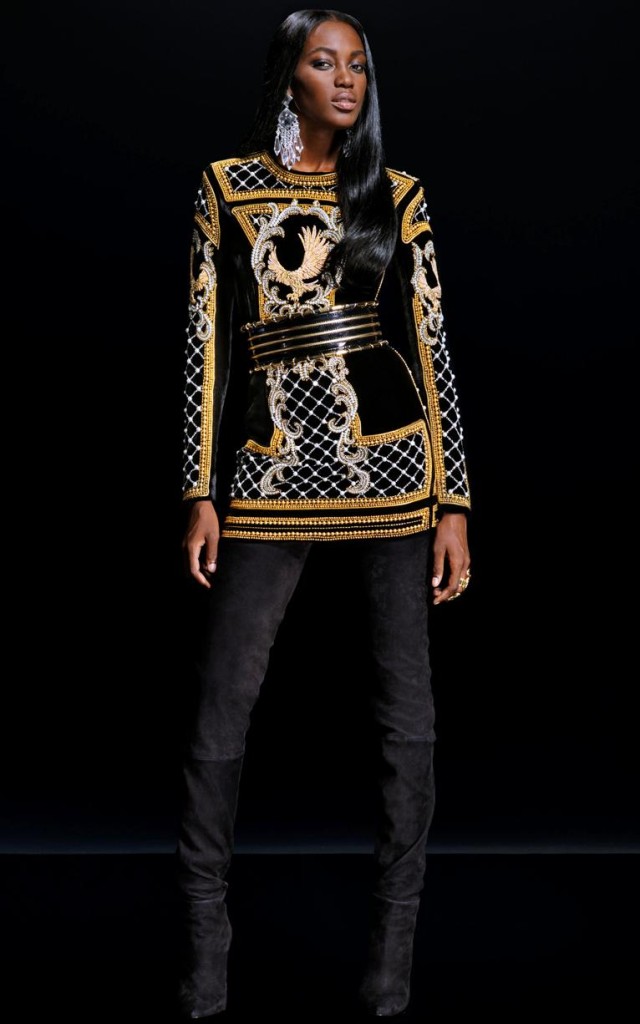 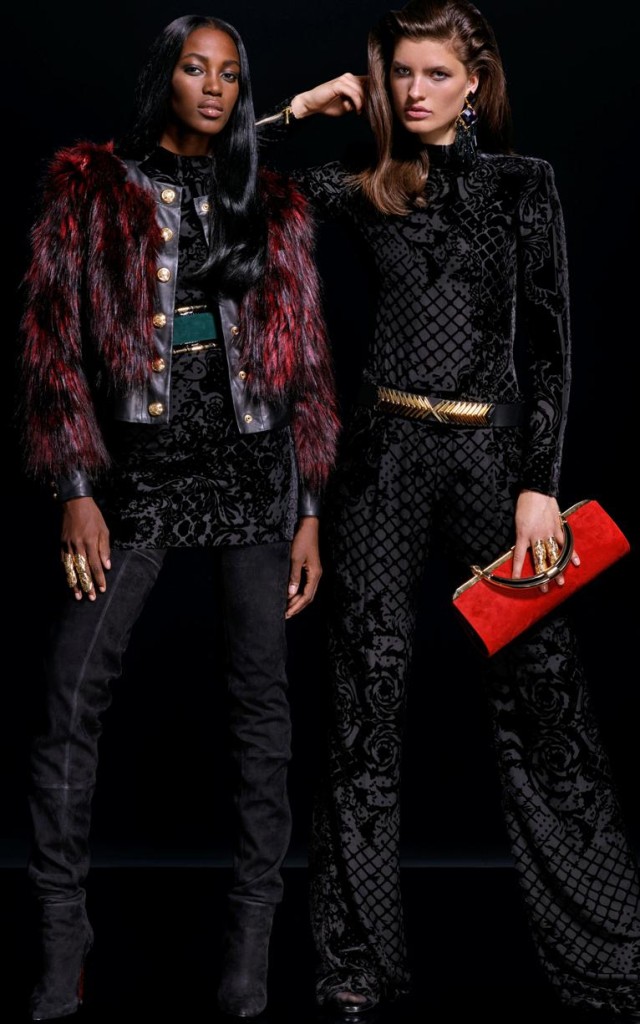 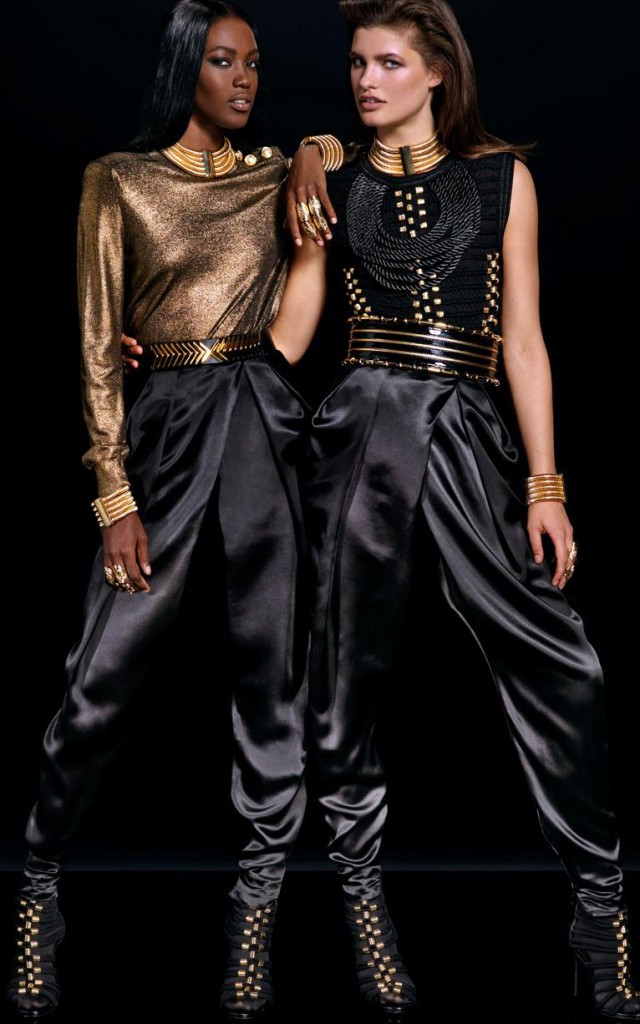 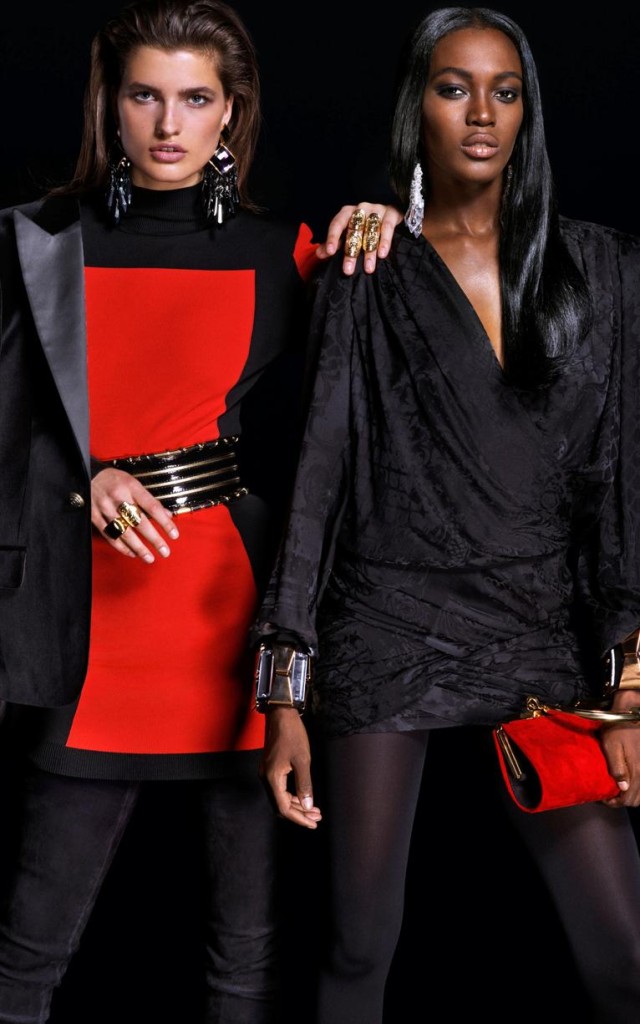 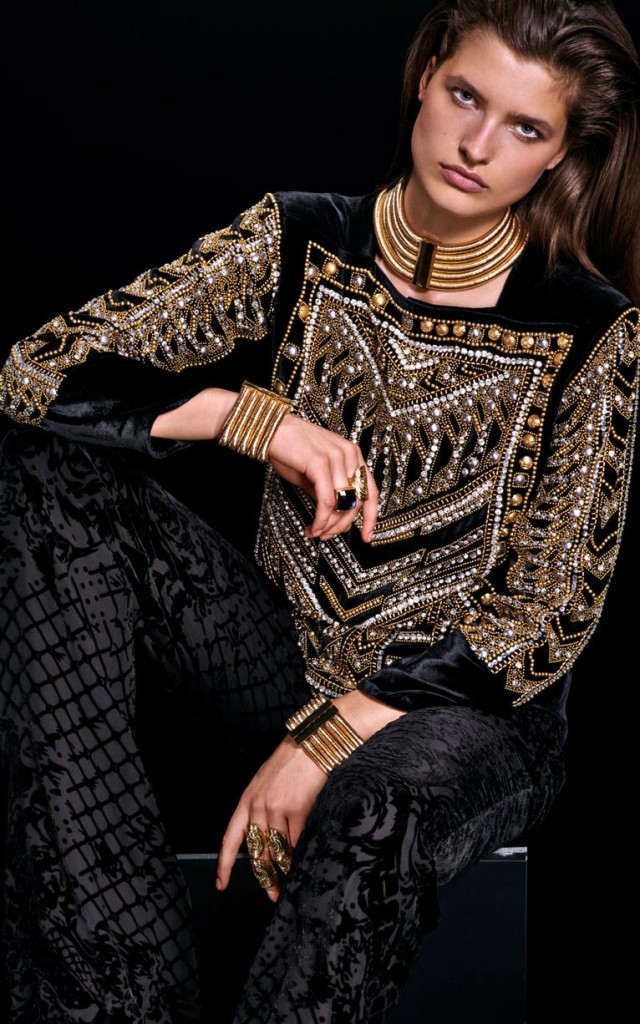 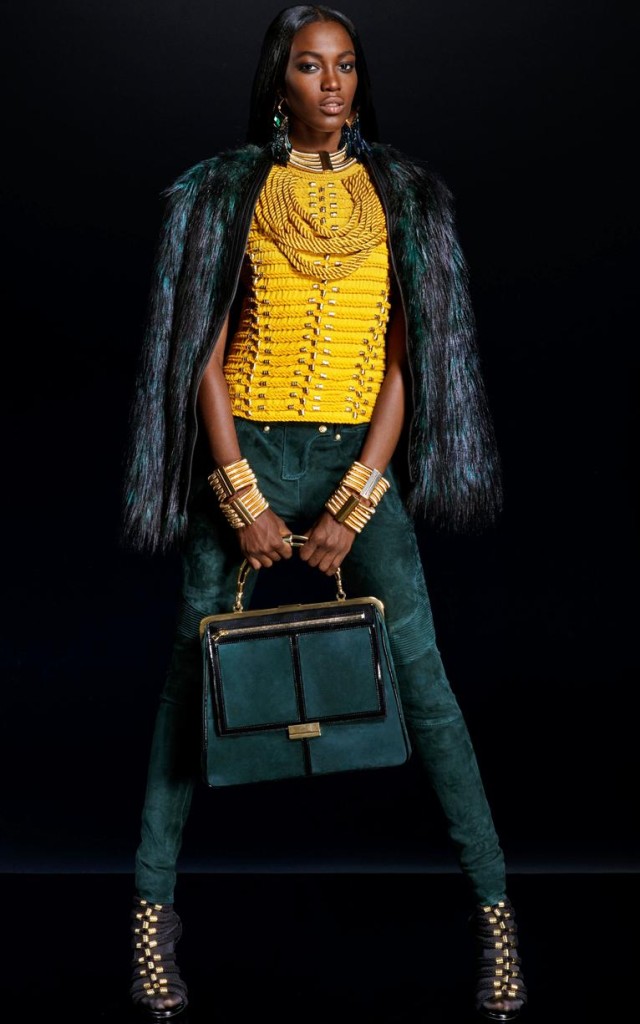 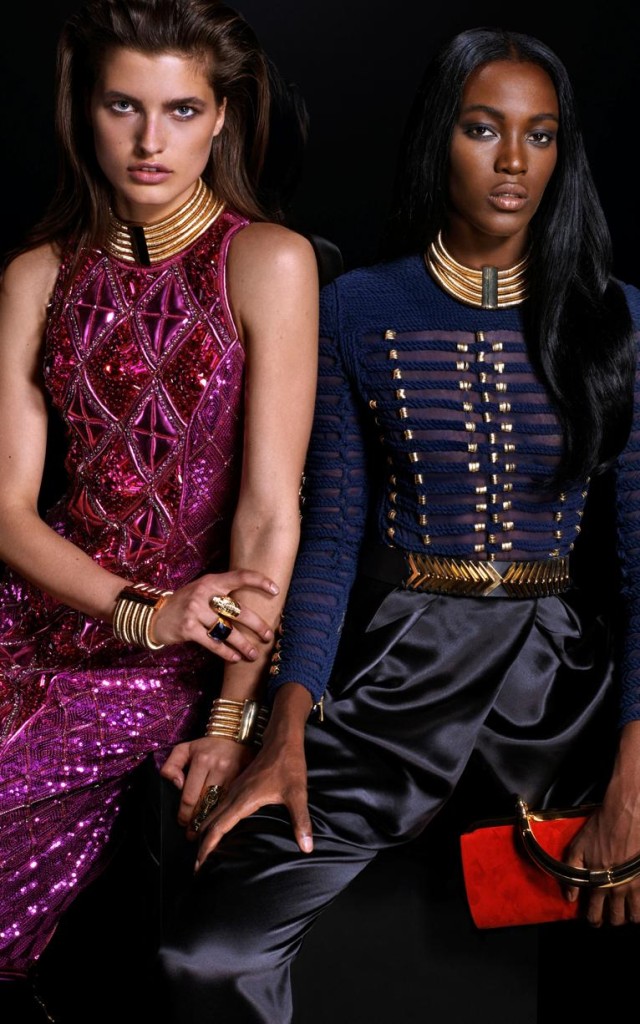 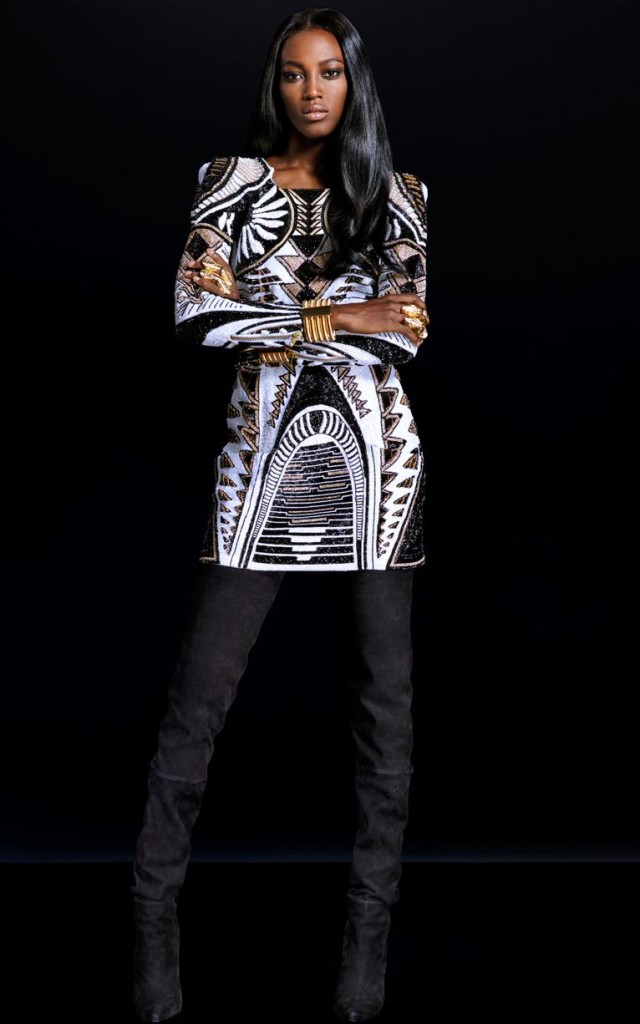 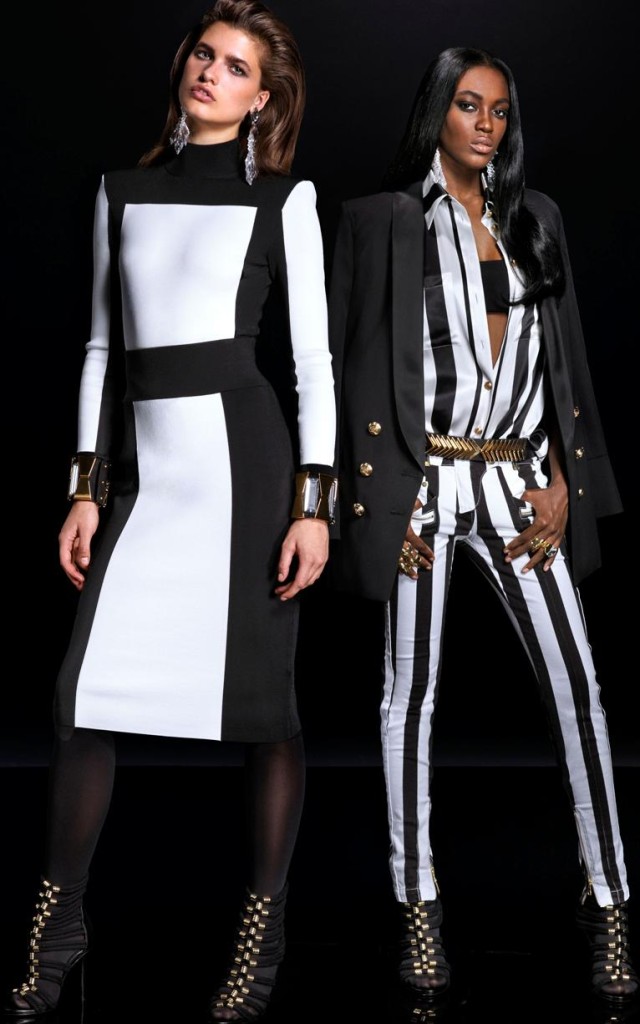 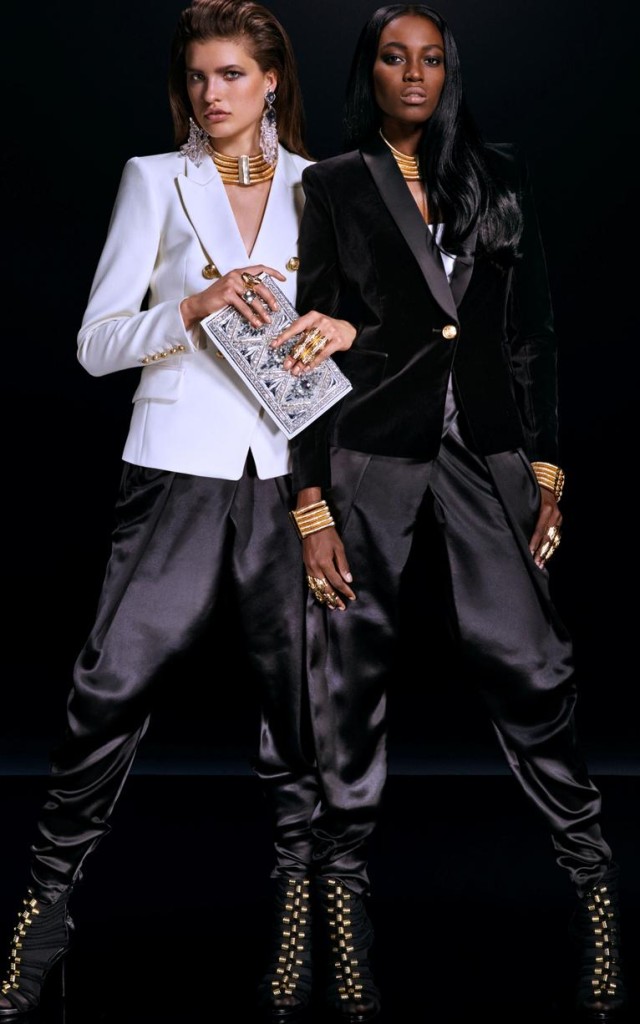 It all started with a kiss. After last season’s men’s campaign picturing Kim Kardashian West and Kanye West mid-embrace, creative director Olivier Rousteing decided to continue that spirit of love and togetherness and photograph siblings for Balmain’s Fall 2015 men’s and women’s ads. “While I watched Mario [Sorrenti] capture a kiss last fall, I was struck by the love and emotion that I was witnessing in front of me,” Rousteing noted. “Starting with a determination to once again focus on the beauty of an intimate connection, my team and I quickly concluded that a celebration of the unique and unconditional love of siblings is a natural progression from the spirit of last season.”

The resulting images, also by Sorrenti, show Kendall and Kylie Jenner, Gigi and Bella Hadid, and—debuting exclusively here—Joan and Erika Smalls in Balmain’s Fall 2015 line. The process of photographing siblings was just as moving as photographing husband and wife to the creative director, who remarked, “Watching them work together also made clear to me the universality of an age-old truth: the truly powerful strength, support, and love that family members can provide to one another.” In the photo above, the Smalls sisters show off some of that power while sporting two of Rousteing’s slinky black-and-gold looks. Sure, Erika Smalls might not be a household name like her top-model sister, but one look at this image and you get the sense that might soon change. 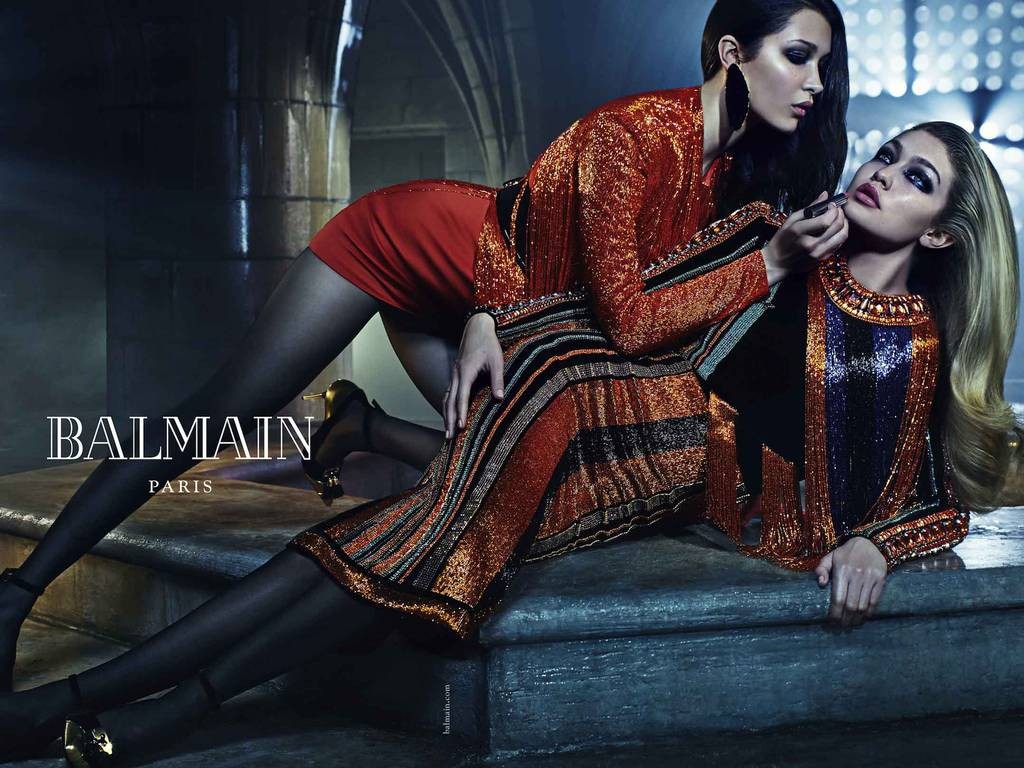 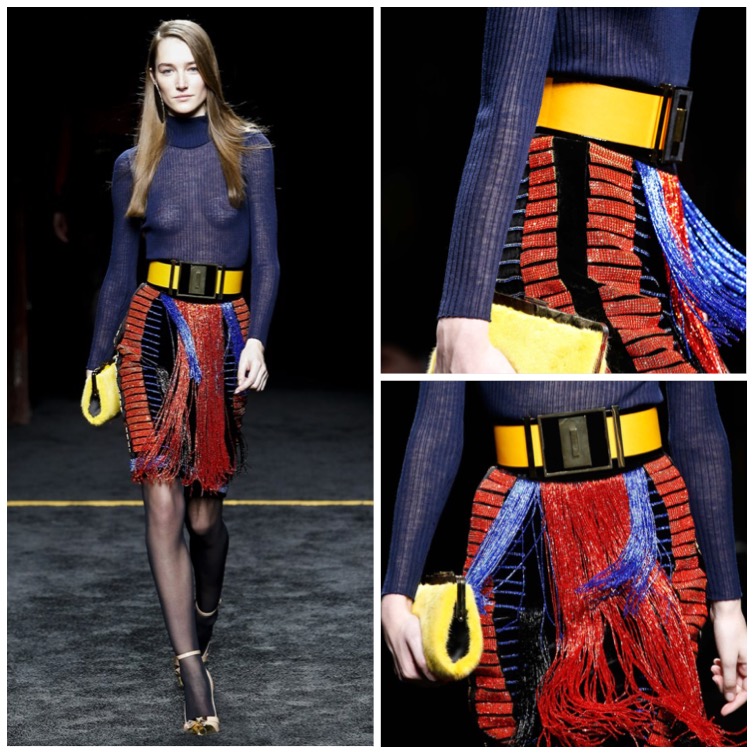 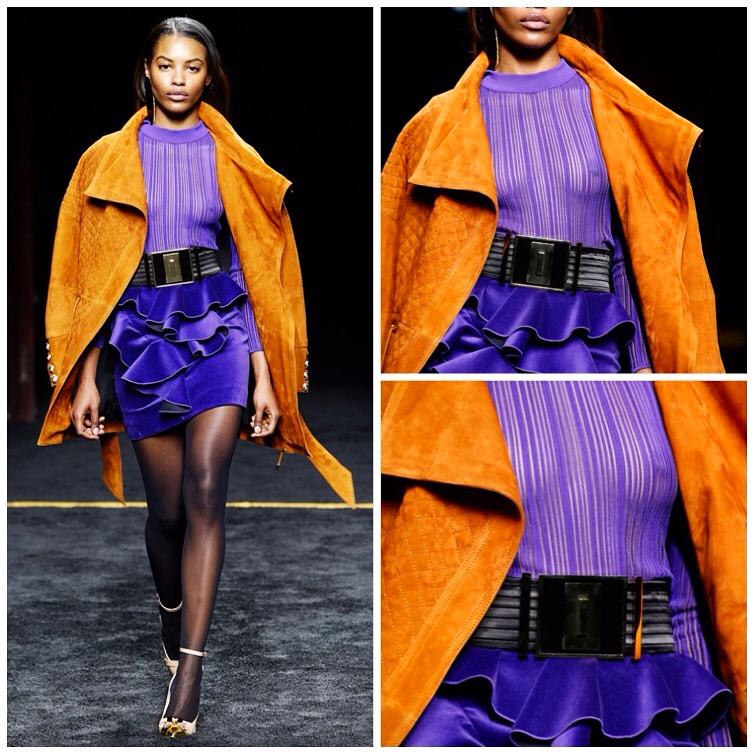 Those transfixed by Kim Kardashian’s new platinum blonde hairdo, which she debuted on the front row at Balmain, were shocked from their trance when Alessandra Ambrosio opened the show in full, in-your-face, wham-bam, glamazon glory.

She entered in a cut-to-the navel, floor-length, mustard pleated gown, belted with glossy leather. Glamour is to be expected at Balmain, but the fab-factor was dialled way up.

Vintage undertones ran deep here – if it was J.W. Anderson‘s job in London to banish the Seventies revival in favour of the Eighties, then Olivier Rousteing has picked up the baton in Paris. Although Rousteing’s show notes claimed a Seventies reference, most of these proportions – and that fierce femme attitude – felt more at home in an Eighties context.

When the collection did riff on the Seventies, then that was visible in the billowing chiffon jumpsuits, printed with popping florals and finished with a ruffled décolletage.

A focus on proportion asserted itself in wide-leg ballooning flares in fine, high-shimmer fabric, pin-tucked to accentuate the pertest of derrières, which were divine; think Pleats Please meets Kim Kardashian and you’re part way there.

In fact, Rousteing may have a #BalmainArmy but Kim was clearly the muse inspiring this collection. The newly blonde bombshell looked particularly taken with a pair of sheer lace kick flares, worn with a sheer lace top tucked into a high waist, and cinched with a wide, pearl-embellished belt.

And below the waist? Perhaps the biggest surprise came in the cover up. These clothes were designed to be less fleshy than what we have come to expect from 28-year-old Rousteing. He chooses long-legged, glowing, robust-looking girls to walk in his show (the kind of gloriously sexy goddesses you’d find walking the Victoria’s Secret runway) and there’s always oodles of skin on display. Legs when visible were in tights – a low, possibly eight-denier by the looks of things.

This was of course an autumn/winter collection, so perhaps that explains the long-sleeves and the heavier handwriting, but it must have been about more than seasonality. Perhaps this woman wants to trade less on her sexuality and more on her talents; let’s face it…

The Balmain woman is so fierce she doesn’t feel the cold. 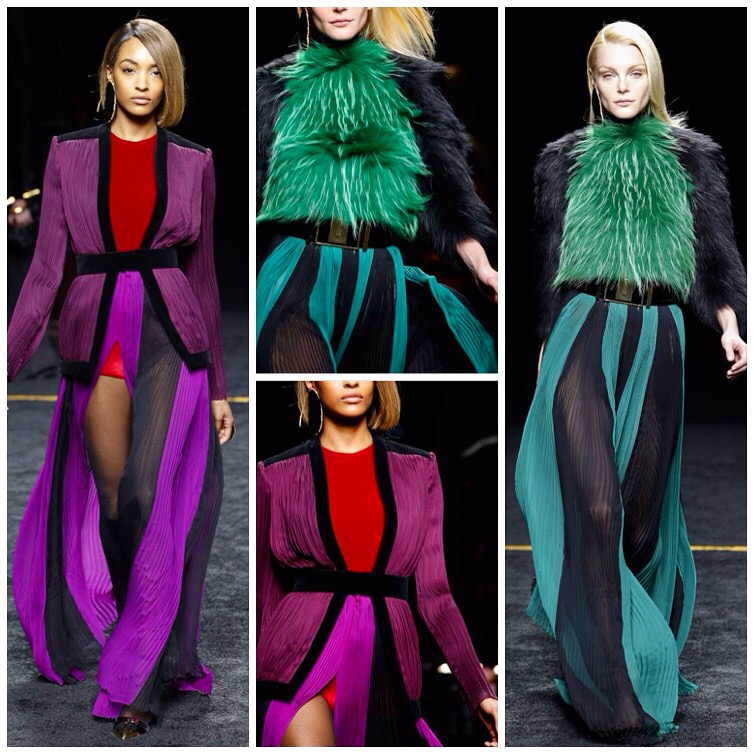 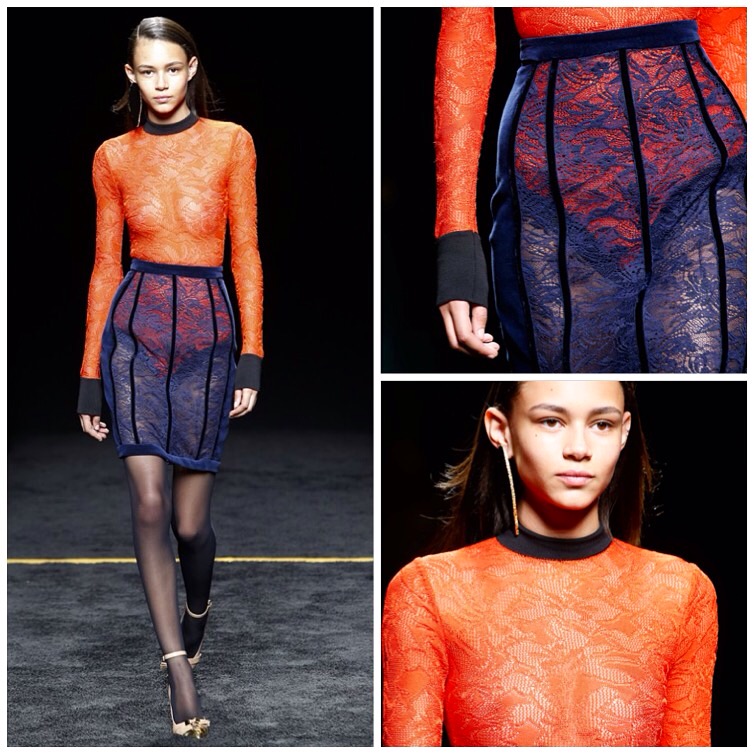