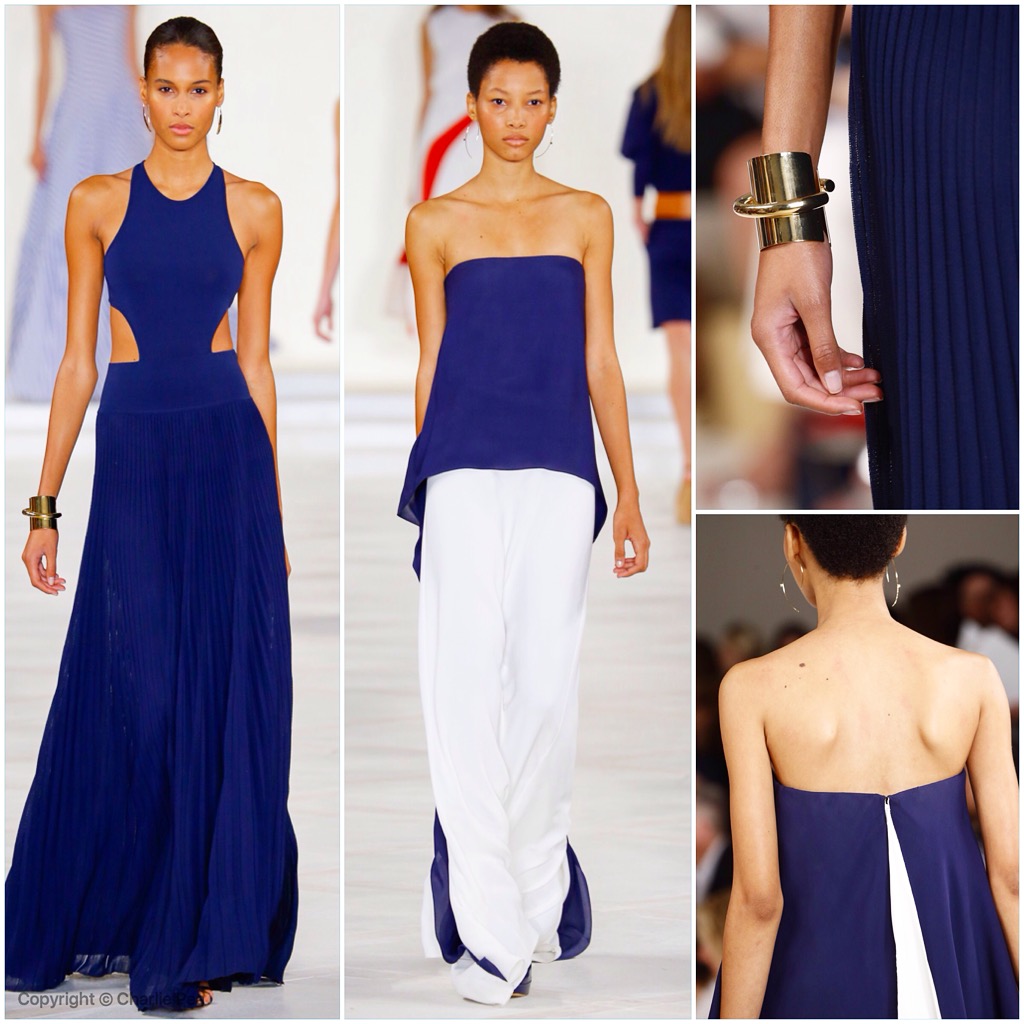 IT was a combination of the French Riviera and Paris in springtime that played out on the Ralph Lauren catwalk with Julianne Moore, Jessica Chastain and Alec Baldwin among those there to take it all in, Frank Sinatra chiming away in the background.

What to pack for it? Ralph suggests bold graphic maxidresses, here they curved in lines of red and blue; wide palazzo pants and fine-knit bodysuits complete with cutouts. Of course, you’ll need a ballgown in stripes and plenty of preppy shirting, for which the designer is so well-known. 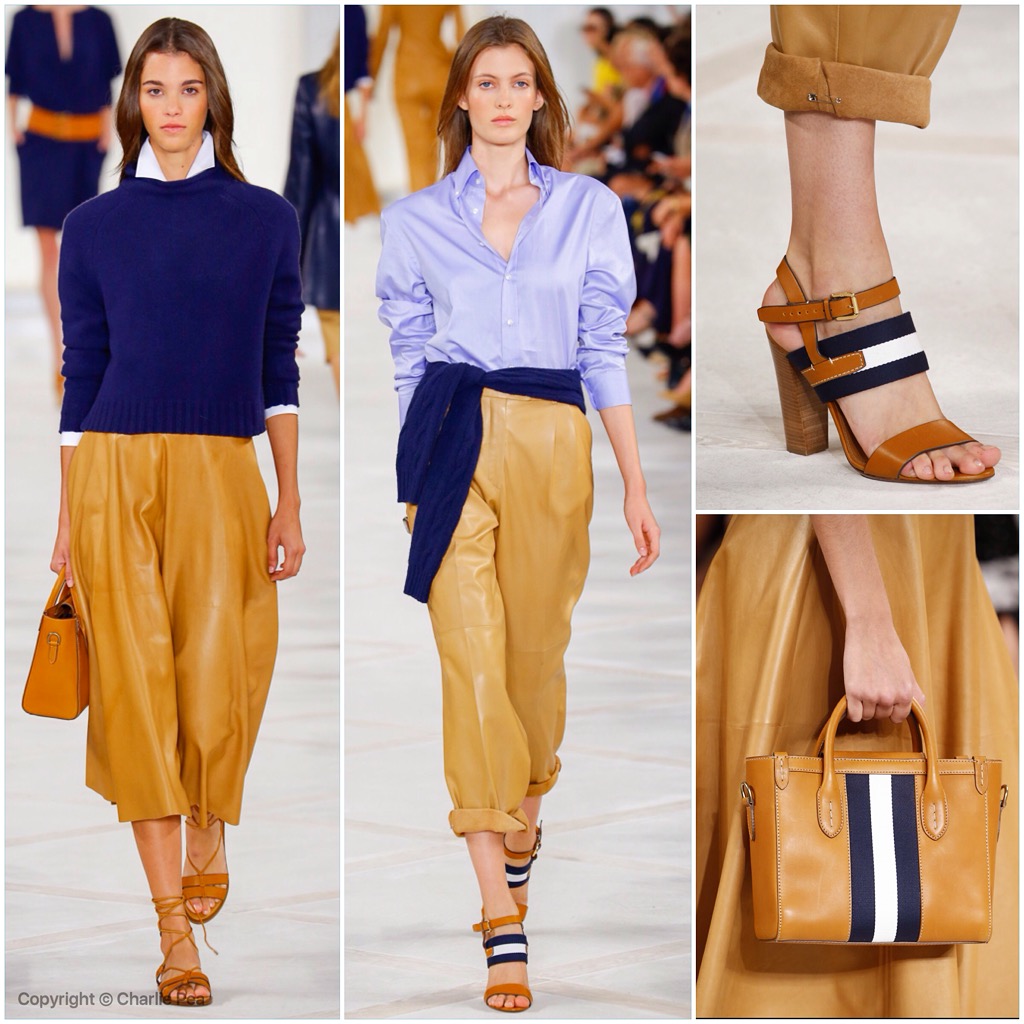 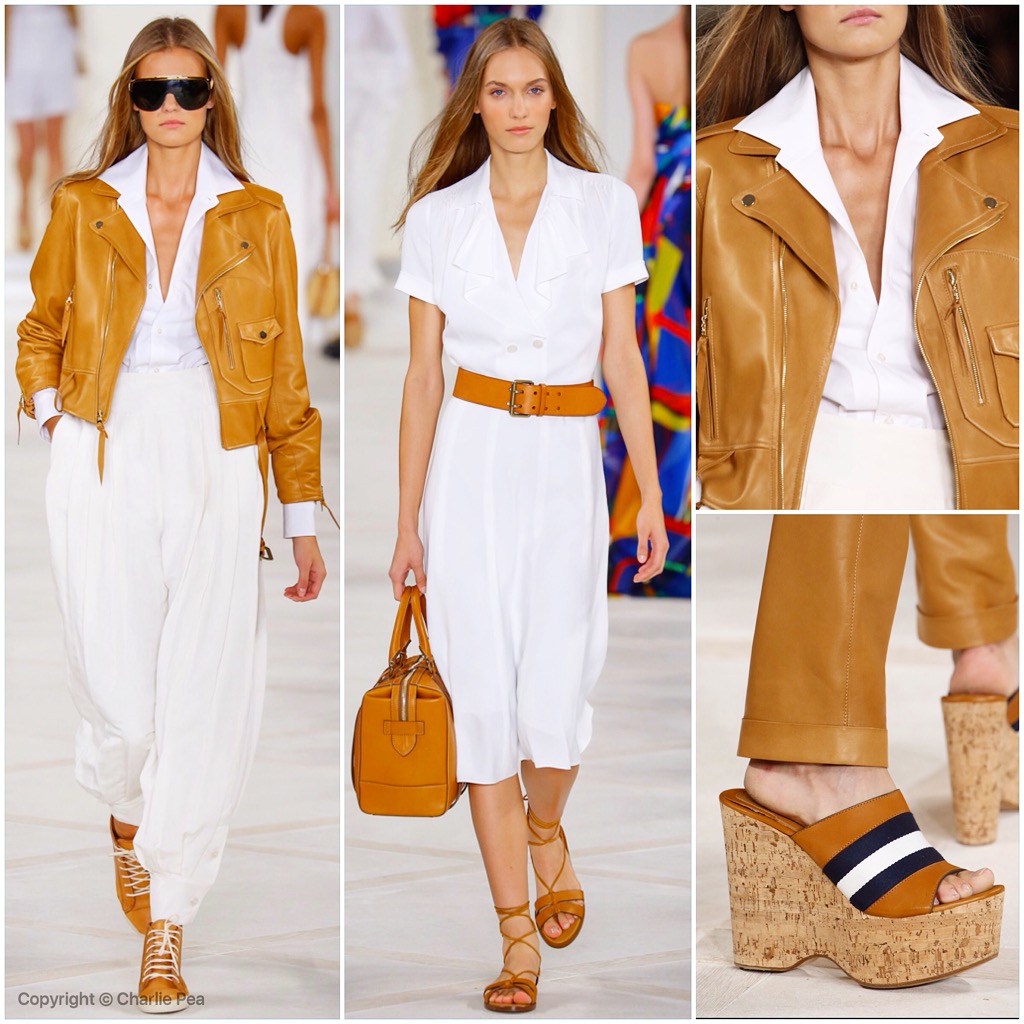 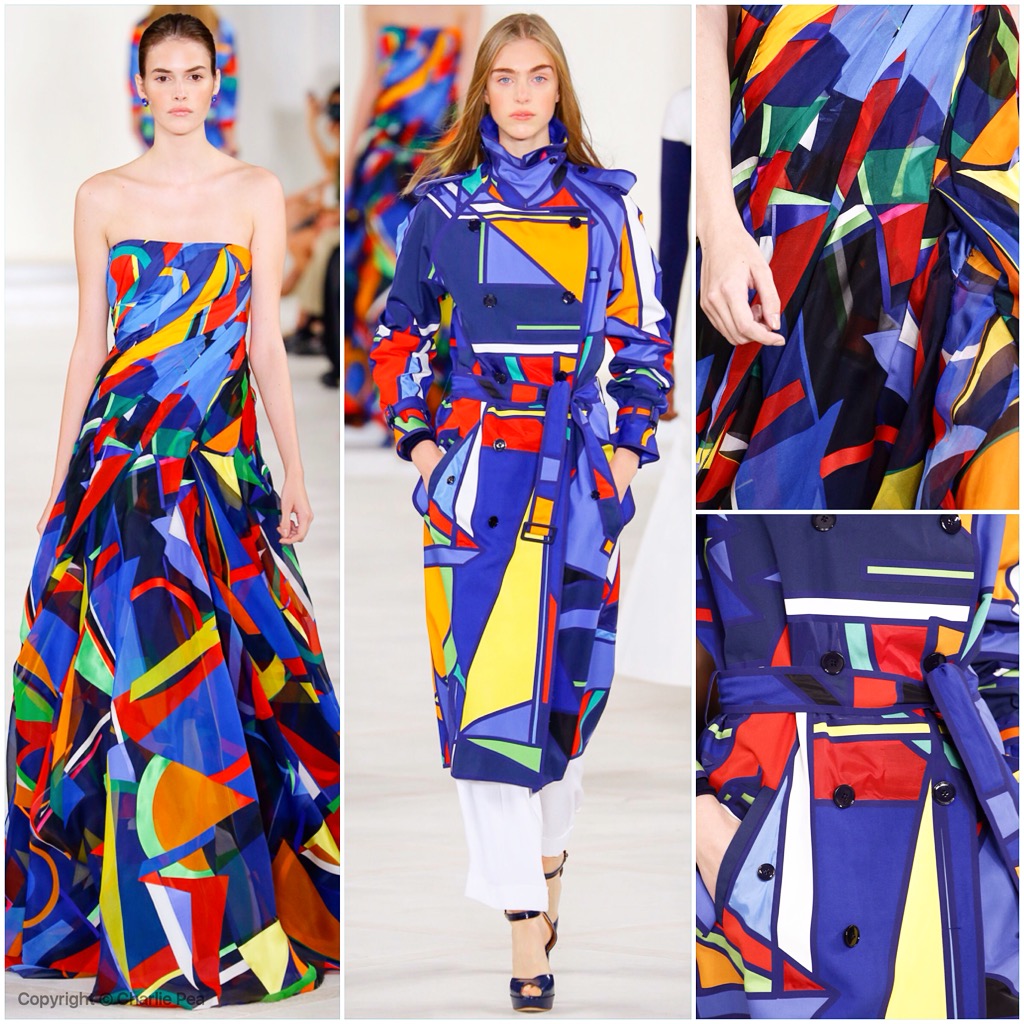 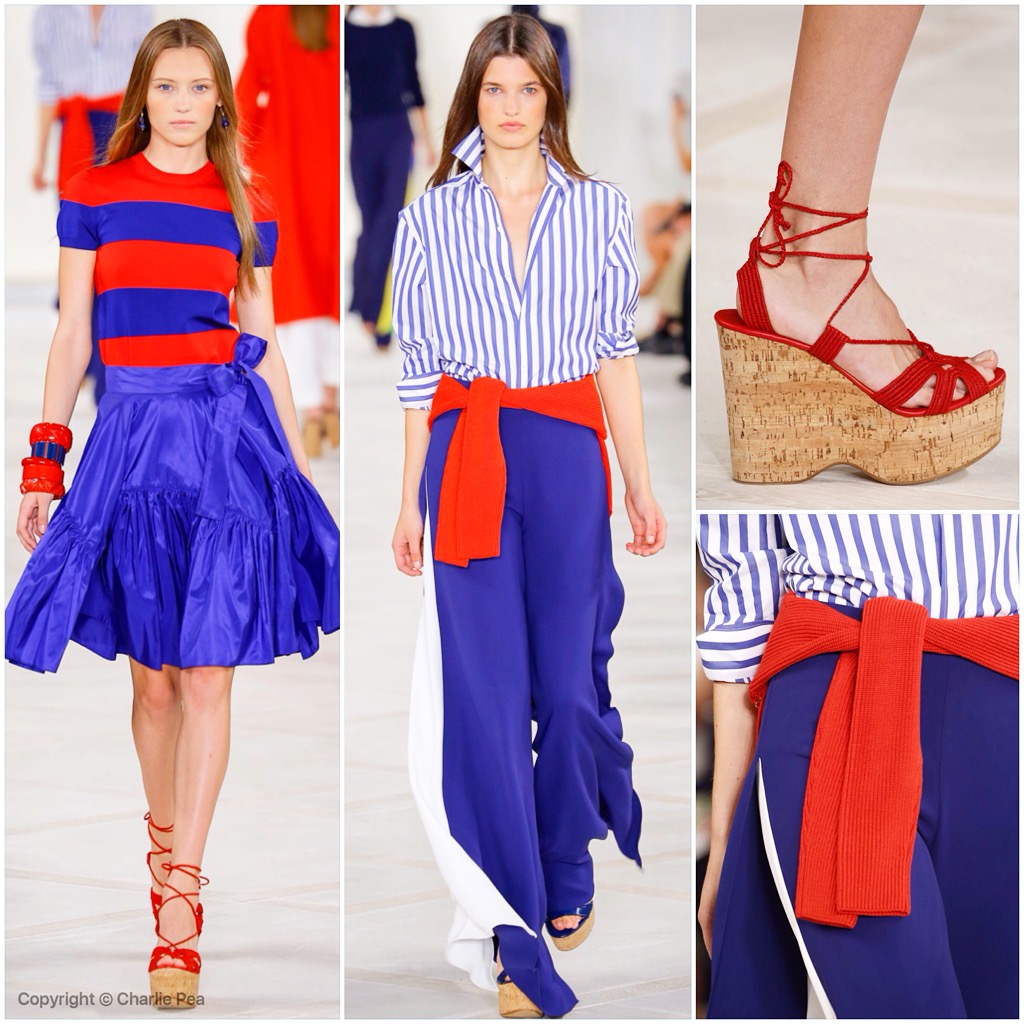 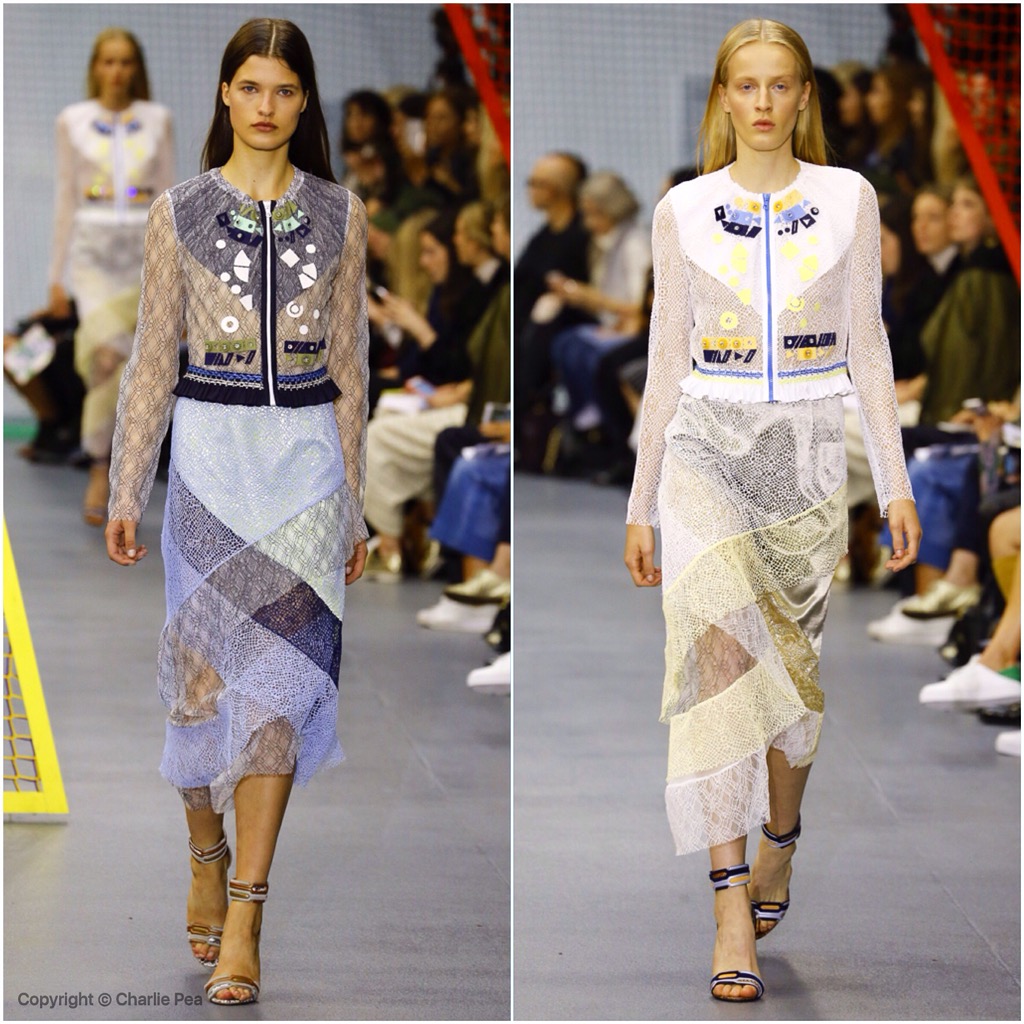 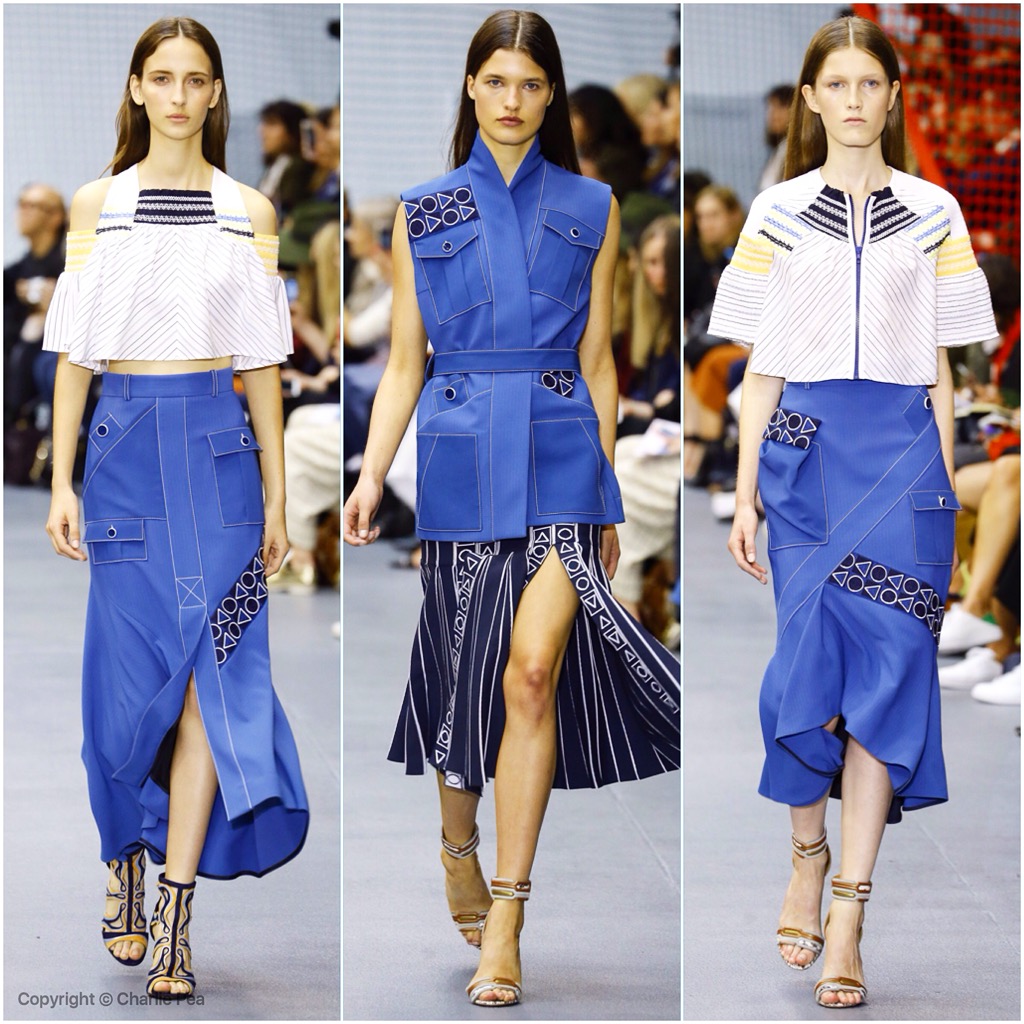 The Peter Pilotto boys were responsible for plenty of cooing from the Brewer Street car park after people had battled through the relentless London rain to find next summer waiting for them in all its smocked, sporty glory.

The silhouettes weren’t new from the duo – we saw those pencil lengths, swinging skirts, and bold bandage-like straps work to great success last season – but this time they have given everything they have got in terms of fabrication, and it’s a case of more is more. Layers of Chantilly lace – so delicate they looked like they might melt away – travelled from top to bottom and came tiered in skirts that danced around the models’ thighs; its macramé counterpart was patchworked with satin seersucker in asymmetric skirts and kick-flare culottes, while the most beautiful smocked-cotton knits were woven into long close-fitting dresses that were so very flattering from front to back.

Peter Pilotto and Christopher de Vos have a very special talent at taking the sweet and giving it just the right amount of structure and edge to ensure it feels modern – and it’s that which gives it its distinctive DNA. The crayon-coloured zips, crisp whites, bold straps and elasticated dropped sleeves lent an athletic accent, contrasting the ethereal feel and palette of sky-blue and lemon perfectly.

Triumph comes when women really want to wear a collection and this pretty yet practical outing is another lesson in how to make sure that happens. 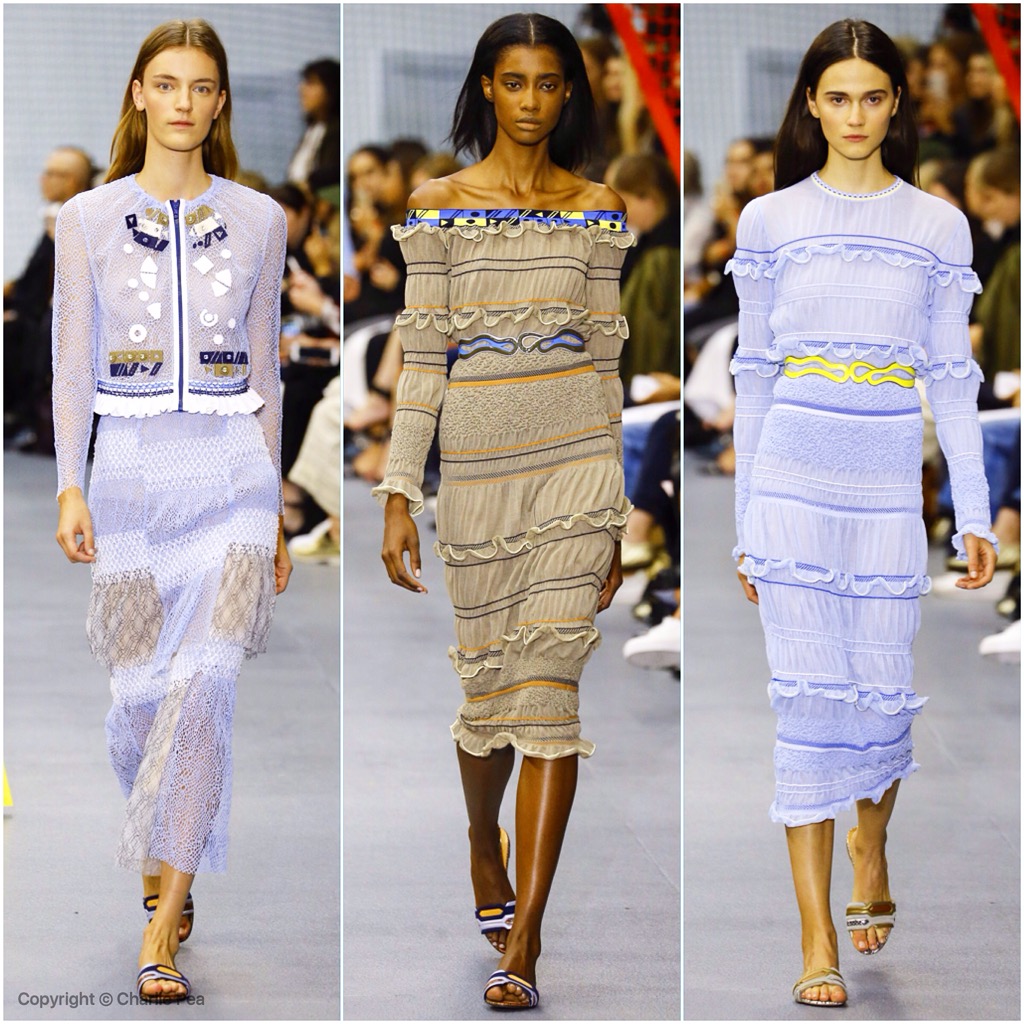 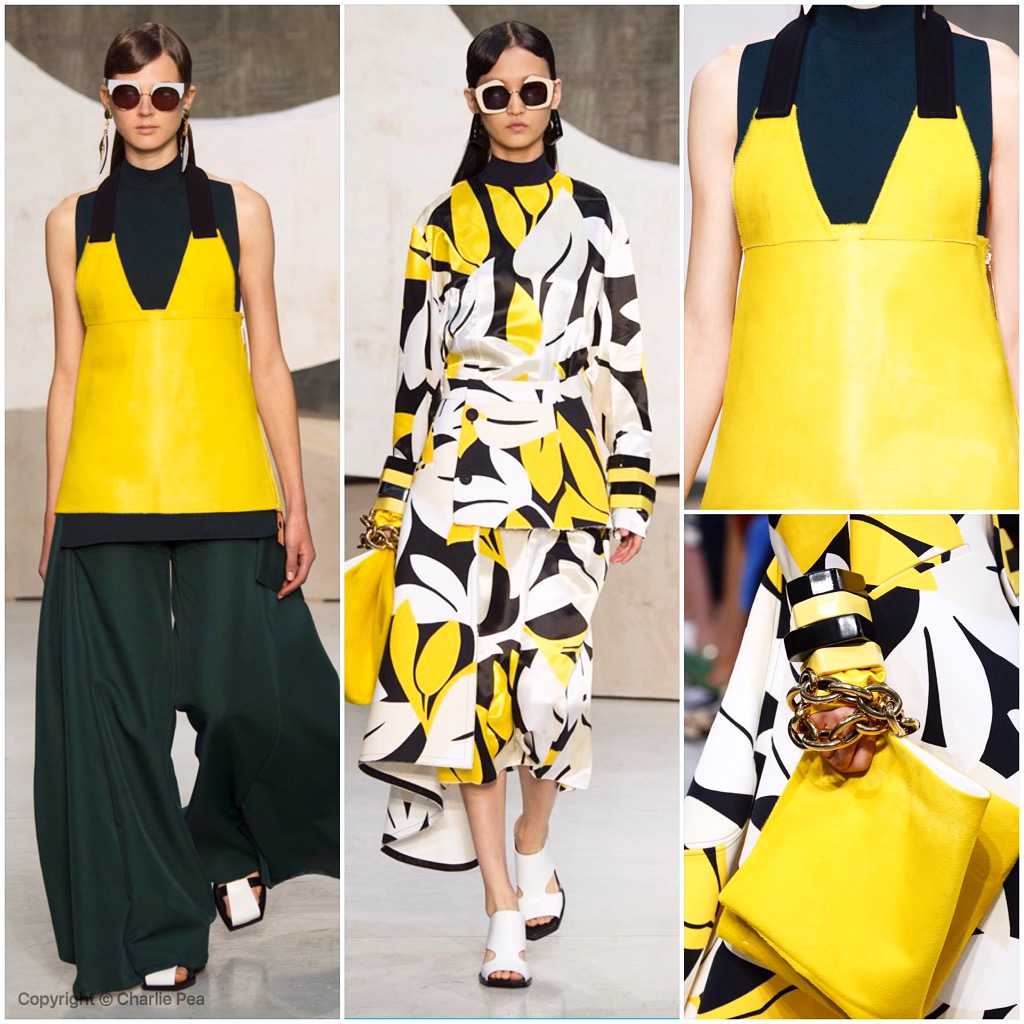 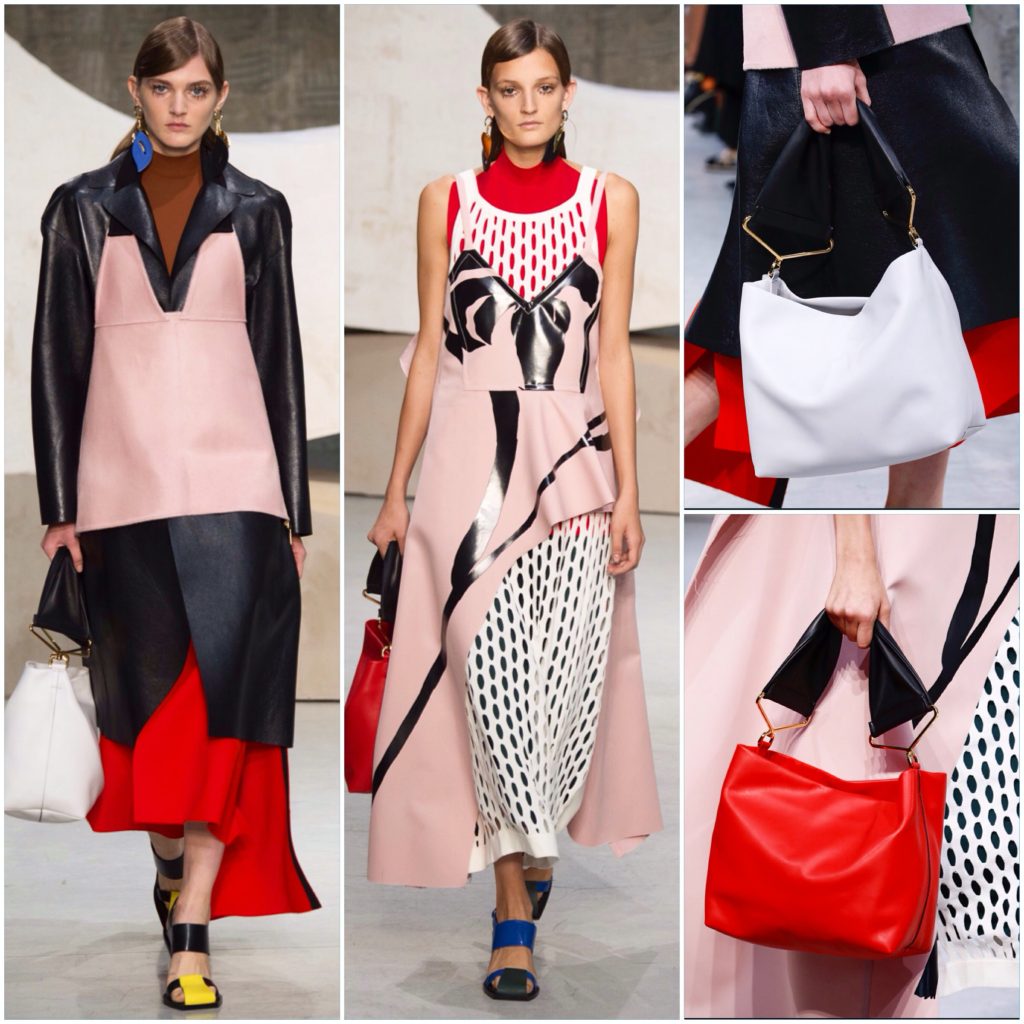 Marni lightened and brightened up the morning for a collection that was laden with Lego colour and eveningwear elegance when it came to layering that twisted and tucked, pinched and folded into place.

It was sportier, and felt like a fresh burst of energy from Consuelo Castiglioni – white, daffodil yellow and the richest of jewel green to incarnate a wardrobe full of wide-leg trousers (a continuation from last season), split tunics and layered dresses and tabard styles. Just as we’ve come to expect and love from the brand, you never quite know where one garment begins and the other ends – here it was a game of dress up with long sleeves splaying out over fingers, sequins jangling beneath asymmetric hems and leaf prints that danced on shoulders in yet more sequins before making a bold impact as print in yellow and green across a mid-length dress. Sculpted graphics did the same and echoed the installation surrounds of the catwalk. That favourite T-shirt-beneath-dress combination factored in a lot here – but upgraded by Marni’s signature complication. 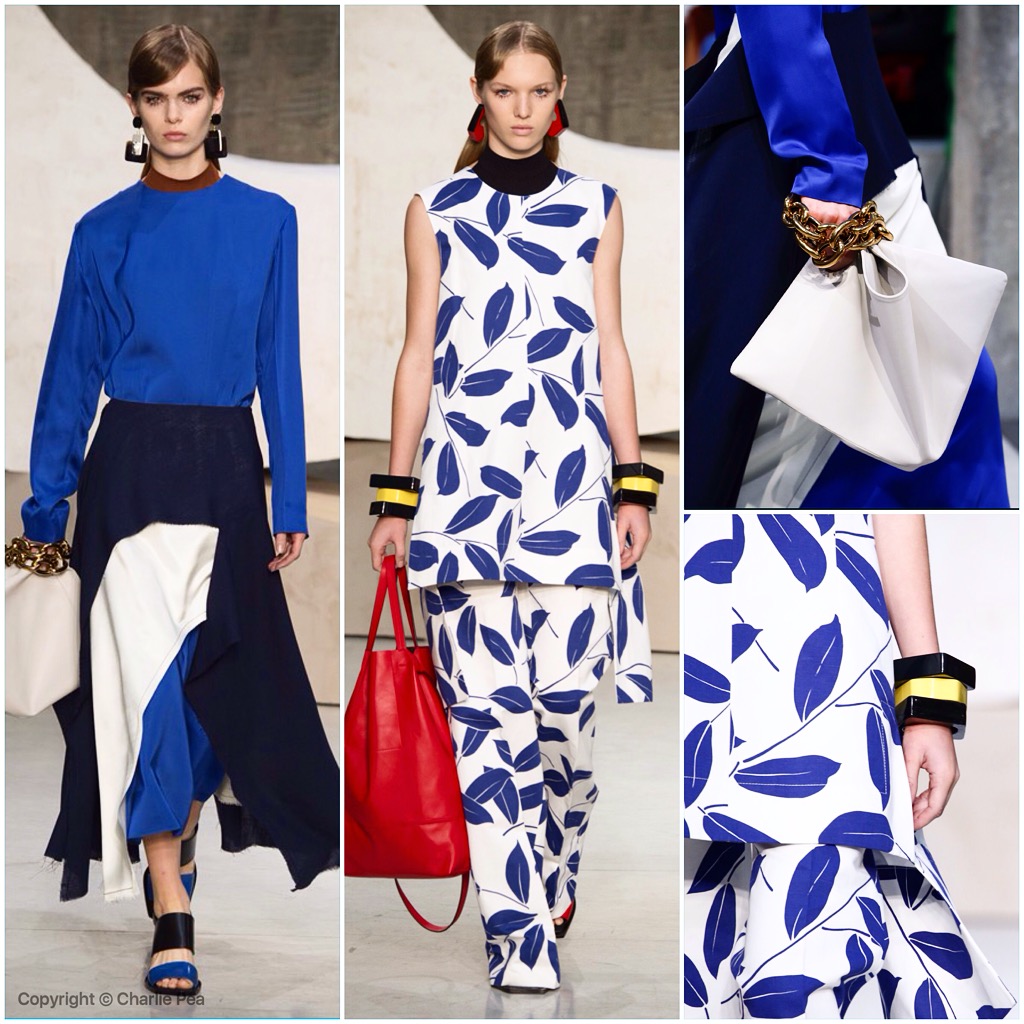 But it’s never just the clothes to contemplate with Marni – you’re looking at those accessories just as much, because they are key in defining and describing the Marni woman. They are so often the dot on the “i” and the cross on the “t”, as it were. Those same leaves hung from lobes in gold, wrists were weighted down by angular bangles and bags were long, width-wise, in metallic and scrunched like a sandwich bag or came as luxe shoppers. And the way to wear your hair is in minimalist bunchies. 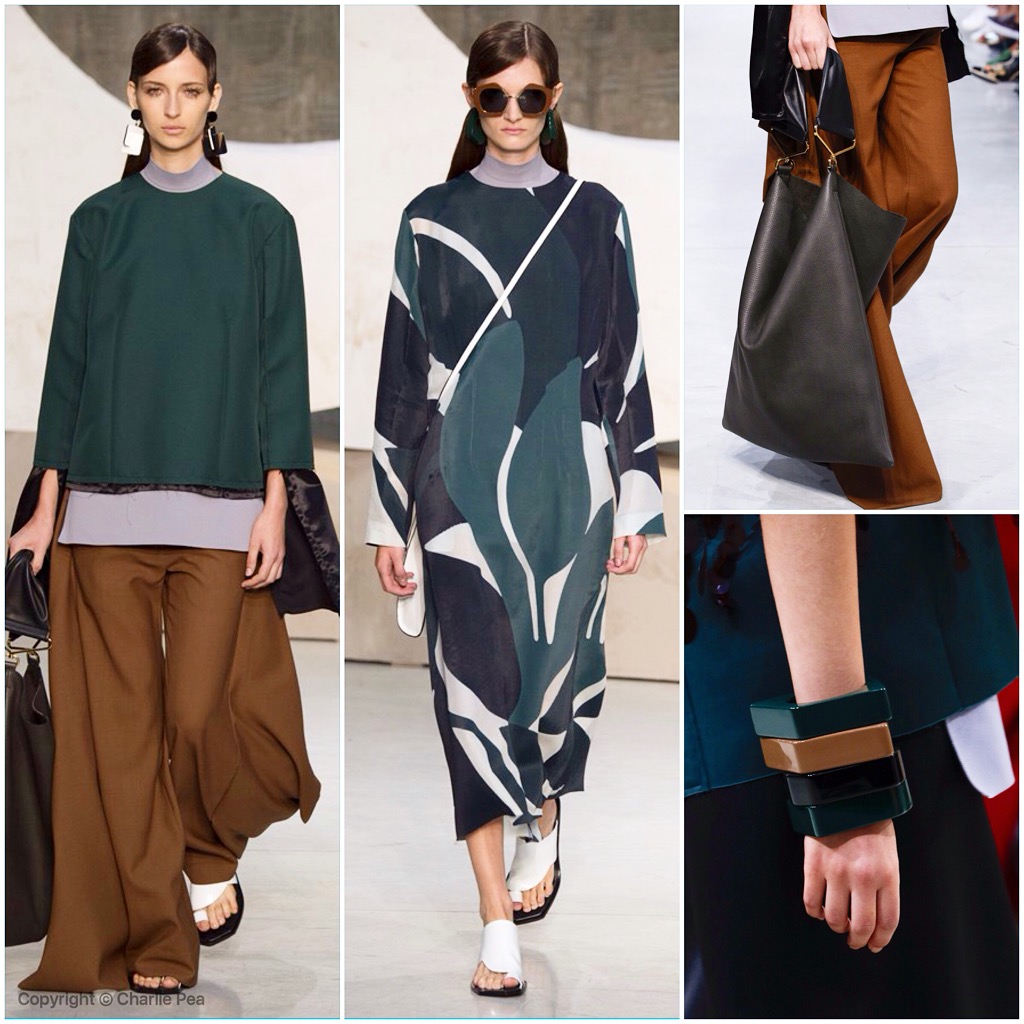 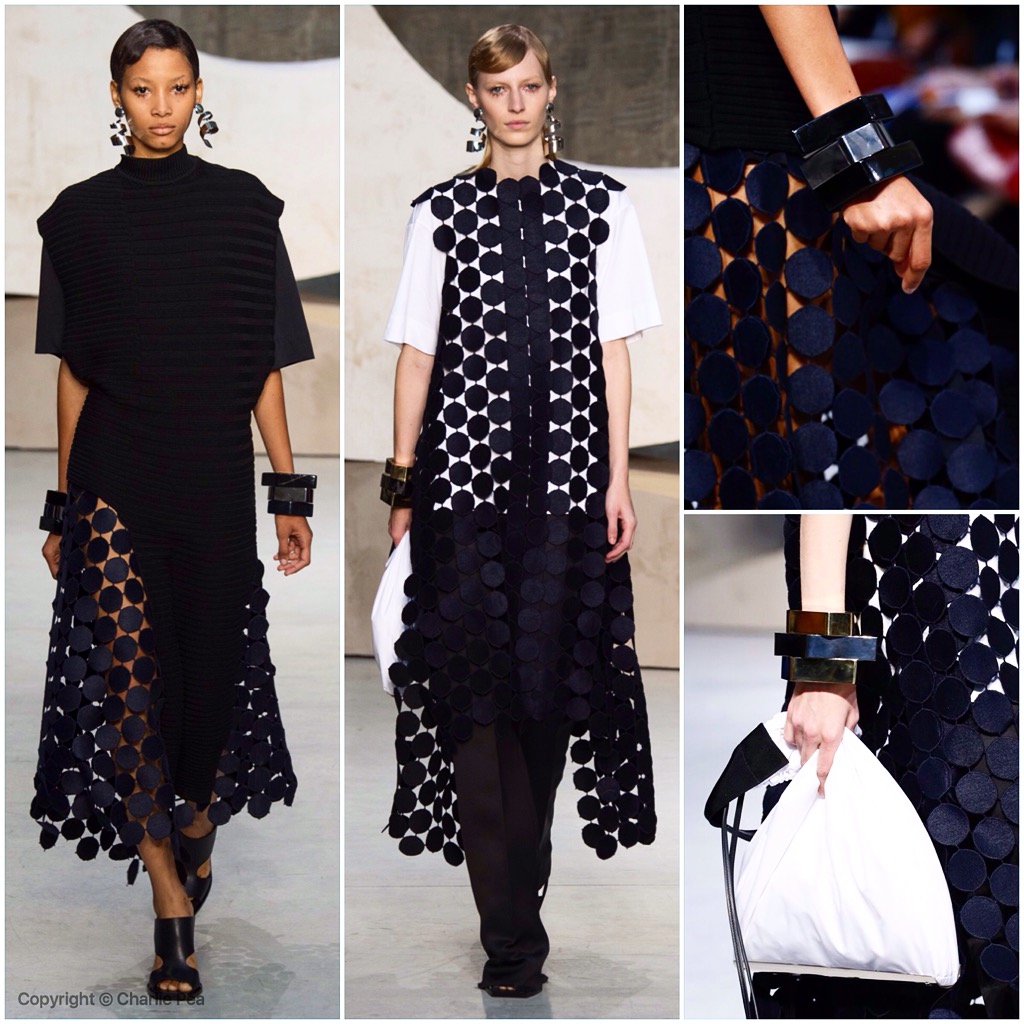 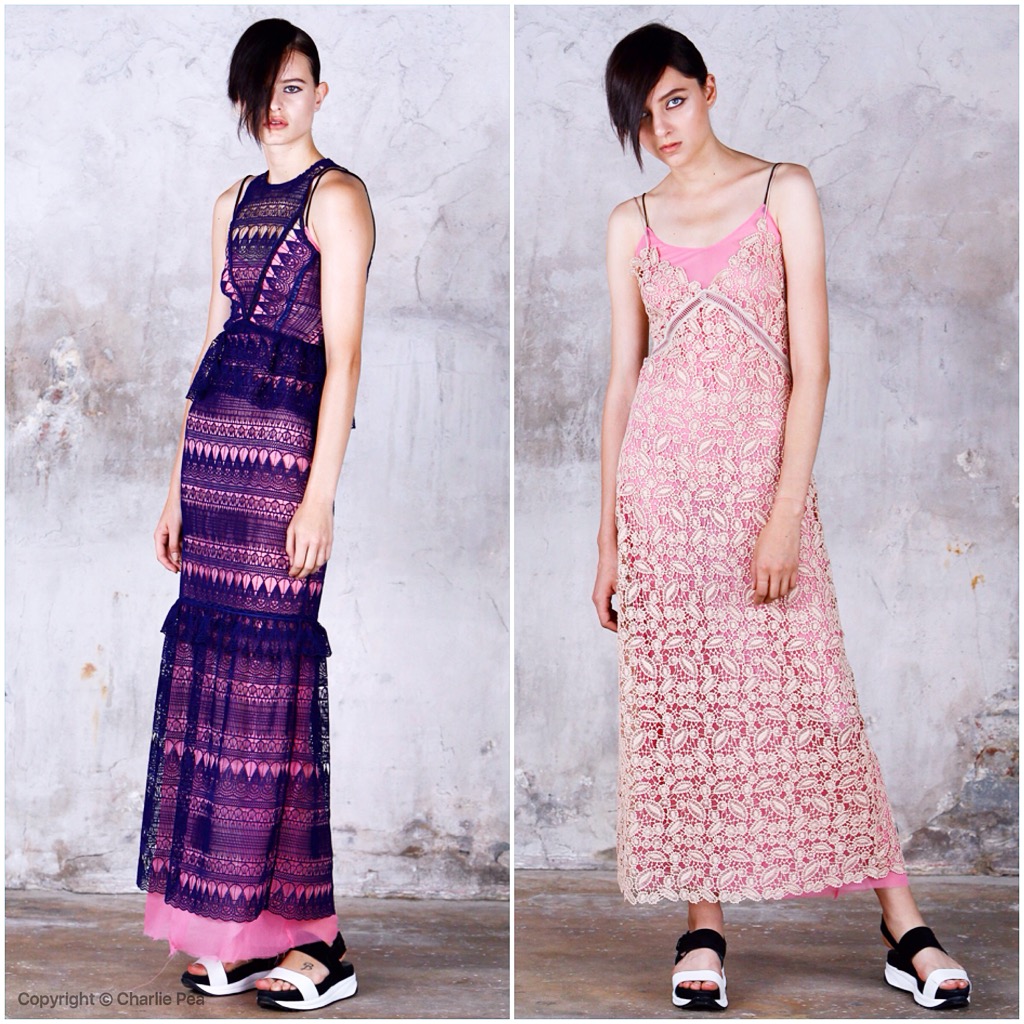 When Dasha Zhukova, Russian-American heiress and editor-in-chief of Garage magazine, attended Pierre Casiraghi’s wedding at Lake Maggiore in 2015, she wore a dress crafted from leaf-patterned guipure lace and lattice embroidery, with delicate spaghetti straps and a sand-coloured mesh lining that fell just below the knee.

But this is all part of Self-Portrait’s appeal. The label’s intricately-detailed garments involve the kind of technical work one might expect from a luxury brand — but a Self-Portrait lace blouse costs $261, while a double crepe dress costs $492. “I could see such big potential in launching a contemporary brand that moves at the speed of the high street, but has a luxurious quality,” says Chong.

It’s a formula that appears to be working. From 2013 to 2015, sales grew by 300 percent — 90 percent of which was driven by wholesale, and 10 percent by online sales. And in just over a year, Self-Portrait has attracted 250 stockists worldwide, including Dover Street Market, Harrods and MyTheresa.com, who have signed on for Spring/Summer 2016. How did Chong do it?

Indeed, the Central Saint Martins graduate first dabbled in art — Chong’s work was displayed at the 2011 Venice Biennale — before turning to fashion. In 2011, Chong launched mid-priced fashion label Three Floor with co-founder Yvonne Hoang. The label attracted the attention of fashion editors and was worn by celebrities such as Emma Roberts, Amanda Seyfried and Nicole Scherzinger. However, “I found myself compromising a lot of thoughts and ideas, so I decided to go my own way,” the designer explains.

After stepping away from Three Floor, Chong founded Self-Portrait in 2013. “By this time, I had a lot of high-street experience as well as high-end, so I decided to mix the two,” he explains. Chong uses a combination of embroidered lace and sheer overlays in many of his designs, using fabrics sourced mostly from Japan and Korea. “Our handwriting is glamorous, but it’s not totally full-on and over-the-top. It’s got an edge to it; a unique quirk. It’s not a conventional red carpet dress.”

The real breakthrough for Self-Portrait, however, came when Selfridges became the label’s first major stockist in 2014. “When we got the opportunity to sign an exclusive contract with Selfridges, I felt that it was a big turning point for the brand,” says Chong. Since launching the label, Selfridges has sold over 100 Self-Portrait pieces each week.

“We immediately fell in love with the brand’s unique mix of femininity with a modern edge. In its first month on the site, we sold a significant amount of Self-Portrait stock globally,” says Linda Ayepe, womenswear buyer at Net-a-Porter.com. According to Chong, Net-a-Porter sold out of Self-Portrait in two hours when it first launched the label in February.

“Self-Portrait is very modern with a strong identity, and is very well-priced, so it’s a winning combination,” adds Natalie Kingham, buying director at MatchesFashion.com. “The lace Azalea dress has been our best-selling piece, and sold out in just over 24 hours.” 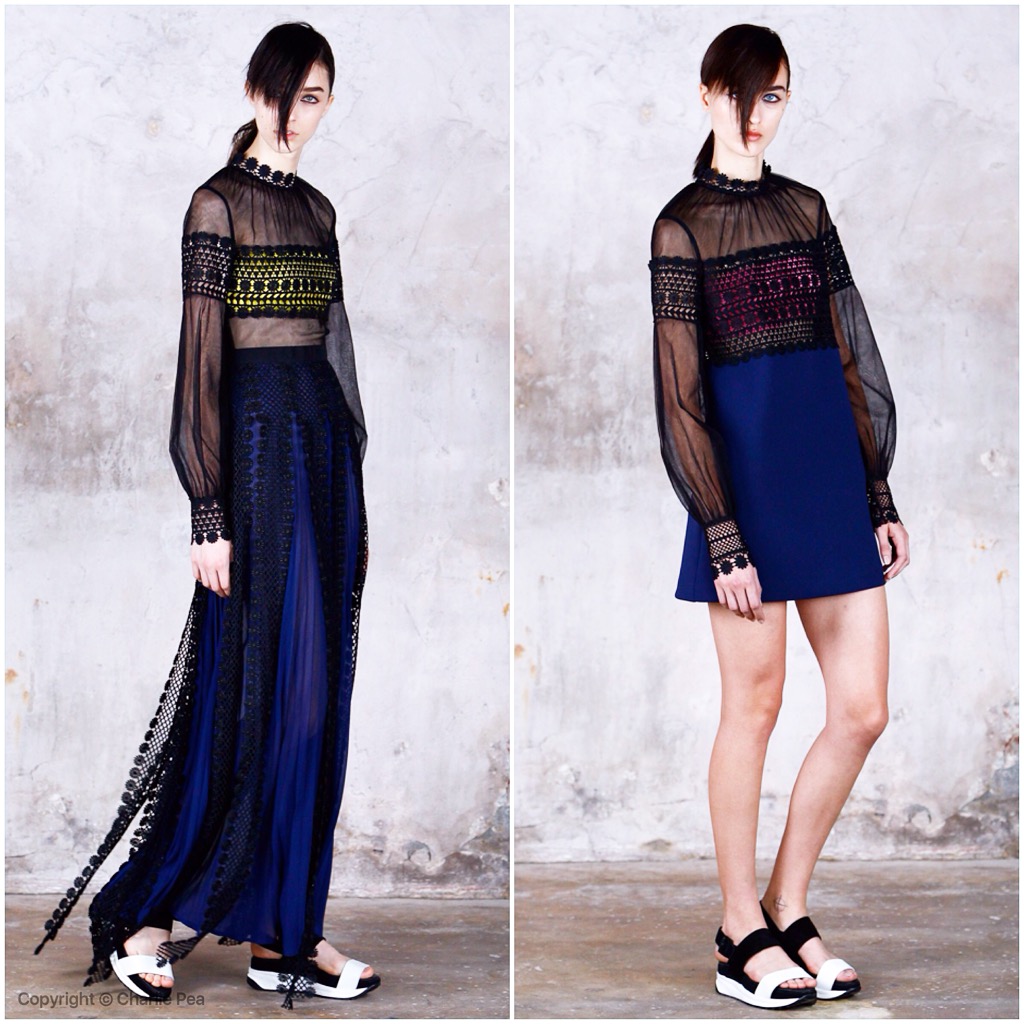