If it ain’t broke don’t fix it. That was surely the thinking from Saint Laurent front man Hedi Slimane this season, now in his third year at the helm of the house. With this collection, which proceeded to be another dollop of everything that we have come to expect from his hand, the designer continued in his pursuit of outfitting rock chicks the world over (world domination is no exaggeration).

His runway was akin to the O2 stadium; well, sort of, in that it looked like a stage that a grimy band might step out on at any given moment, bad vocals and all. Except they didn’t. Blinding stadium lights switched on and the runway was elevated up to music festival heights (which added a bitter taste of self-importance, the audience now serving as diehard fans, looking up in adoration). There were tulle prom dresses worn with mannish tweed blazers or leather jackets and laddered fishnet tights; the super skinny ‘Le Smoking’ complete with braces, twinkling dishevelled party dresses, fur coats (the sort that you might hope to find on a good day at Camden market) leopard capes, and a lot of micro mini leather skirts, everything atop spiky boots. No surprises.

What these mean in the grand scheme of things? While this looks like everything we have ever seen before, and his critics are left wondering how – and perhaps more pertinently, when – he’s going to move things along, Slimane is doing something right: sales at Saint Laurent are rocketing. Also on the plus side: everything you have ever bought here since his arrival is still relevant, and at these price tags, that’s no bad thing. 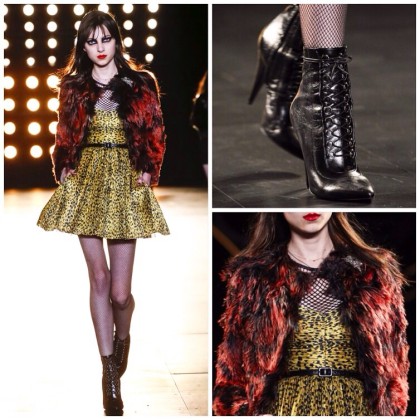