The French Riviera location, the expansive red carpet, the gathering of some of the world’s most famous actors in one place… the Cannes Film Festival

When it comes to red-carpet glamour, few events compete with the Cannes Film Festival for sheer sartorial spectacle and star power – the A-list arrive in abundance, the ballgowns are bigger and the jewels more lavish.

First up to face the press in 2014 was Nicole Kidman, as her new film, Grace of Monaco, opened the festival. No stranger to Cannes – she was a juror in 2013 – she looked the picture of elegance in a white Altuzarra dress as she attended the event’s very first photo call, before the evening’s premiere to which she wore an elaborately-embellished Armani Privé gown.

She was the first of many stars to grace the red carpet with Julianne Moore, Cate Blanchett, Blake Lively, Zoe Saldana, Karlie Kloss and Audrey Tautou among those following her lead.

Graduating seamlessly from the small screen to the big screen, she’s starred in a string of hit films – The Town, Savages and Green Lantern, to name a few – and in the process has become a regular fixture on best dressed lists for her red carpet style.

Something of a fashion world darling, she’s been a regular on the front rows of New York Fashion Week, starred in a Chanel campaign – she even accompanied Karl Lagerfeld to the 2011 Met Ball – and was named the face of Gucci’s Premiere fragrance in 2012. 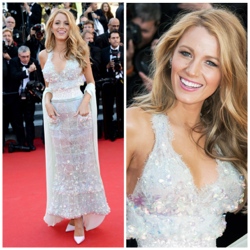