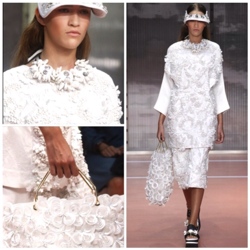 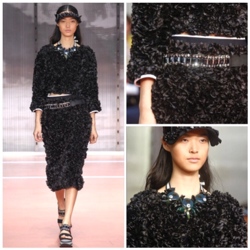 STAGING a catwalk show is by no means the easiest of tasks. Today, it was a feat that we were even sitting in the industrial-looking, airy Marni showroom on Via Sismondi; a building, which had been owned by the brand for some time, but which sitting tenants had until very recently rendered useless.

But this morning, there was a dodgy generator to contend with. Panicked PRs with an eye on the time said the show would go on – without music. And so, the collection debuted in silence, bar the initial cheers of supportive fashion spectators and the continual fluttering of camera shutters. It was perhaps, all the better for it. It’s Sunday morning after all, who really needs all that noise anyway?

Florals are never too far from the Marni vernacular and they sprung in multiple guises: blossom prints looked pretty but those sketchy jagged florals felt fresher and gave bite to tame midi-length dresses, elsewhere bomber jackets (not going anywhere anytime soon) bloomed in 3D petal appliqué – another technique we have seen a lot of this season.

Consuelo Castiglioni is no minimalist and this season she wanted to emphasise as much. When it came to silhouette, there was a caressing of the body, curved lines looked protective and sculpted new shapes; boxy tops were pinch-seamed to suggest a waist and those curious wide trousers with drapey volume at the back may be a hard sell on the rails come spring, but on the body they looked terrific, so too those nipped-waisted jackets erupting in frothy tulle ruffles. There was lots to excite, right down to the spongy thong flatforms and jewel encrusted visors, which played up to the sporty vibe.

Backstage, Castiglioni was talking about the juxtaposition of opposites. “I loved the idea of those lighter fabrics, tulle and ruffles set against heavy trousers, hard and soft.”

As for the soundtrack, “It should have been played out to Sid Vicious, My Way,” said Vogue’s Lucinda Chambers, backstage. “It was supposed to be pacy!” No matter, sometimes noise only serves as a distraction. 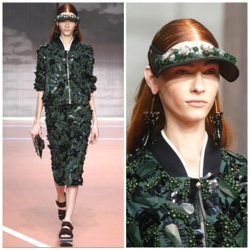