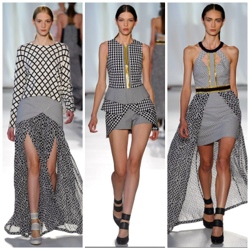 Sass & Bide was founded by Sarah-Jane Clarke and Heidi Middleton as a stall selling jeans on London’s Portobello Road Market in 1999. Now, they are known for their signature embellishment – which has included seeds, raffia, teeth, shells and metal.

The pair met at St Aidan’s Anglican Girls School in Australia in 1992.

Sarah-Jane (sass) then studied at the Queensland University of Technology and became an accountant. Heidi (bide) went to Queensland College of Art and Griffith University and worked as an art director before they set up their label in London.

Returning to Australia in 1999, the label’s popularity and growth culminated in a runway show at Australian Fashion Week in 2001.

In 2002, they showed at London Fashion Week. They were then were invited to show in New York in 2003, where they showed for eight consecutive seasons before moving their shows back to London for their spring/summer 2010 show in September 2009.

In 2008 Sass & Bide designed a denim line for Topshop.

In 2009 Sass & Bide launched a one-off charity event called the Shine Initiative with Barnardos that auctioned artwork produced by celebrity friends that would benefit abused children.

The two were announced as the Australian winners of the Veuve Clicquot Business Woman Award 2010.

Sass & Bide returned to the New York Fashion Week stage today after an absence of six years. And we imagine that the presence of the week’s style set – Dree Hemmingway, Iggy Azalea and Zoe Kravitz among them – was a welcome front-row view.

When it came to the collection, the girls – Heidi Middleton and Sarah-Jane Clarke – opted for a purposeful clash of an aesthetic, mixing modern graphics with adornment and sharp shapes with those that celebrate the female form. “Emily Bronte’s words resonate with this collection: ‘I’ll walk where my own nature leads me, it vexes me to choose another guide’,” said Middleton after the show. “The girl who is going to wear this collection is strong and free-spirited. She has fun, she’s a free spirit, she walks to the beat of her own drum.” 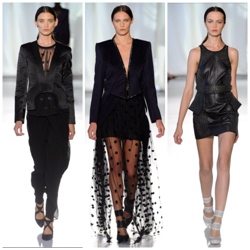