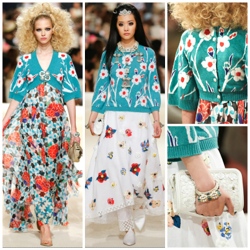 The oil-rich enclaves of Dubai have frequently been dubbed an adult’s playground.

Last night, they were also the spectacular backdrop for Karl Lagerfeld’s Chanel Cruise show – a presentation of inter-seasonal, commercial clothing that originated, as the name suggests, as garb for the super-rich cruising around the Caribbean between the winter and summer fashion seasons. But these “pre-collections,” comprising as they do 70-85% of fashion houses’ sales, have become big business. Nowhere are they bigger than Chanel – at least, according to rumour. No public figures are released for the house, but with turnover reportedly in the billions, it’s reputably the biggest fashion house of them all.

They certainly pulled out the stops when it came to Cruise, setting a select few hundred press, well-heeled clients and celebrities including Tilda Swinton, Vanessa Paradis and the American singer Janelle Monae to sail off the Dubai coast to a man-made island. Amidst faux-Bedouin tents and flaming tapers was the Chanel venue: a modernist, custom built and double-c encrusted interpretation of a Middle Eastern souk.

It was Dallas, not Dubai, that actually provided that hyper-modern horizon, the scene of Chanel’s last en masse trip back in December – the house undertakes these jaunts twice a year, each time the disparate locales inspiring the fashion on show. There’s more than a passing link between Dallas and Dubai – witness the quilted leather bags and plexiglass minaudières Lagerfeld sent out fashioned into the shape of oil-cans, a not-so-subtle tongue-in-cheek reference to the source of Dubai’s vast wealth.

That was a trademark touch of cynical Lagerfeld humour, but ultimately the take-away from the gilded tweeds, pearl embroideries and delicate chiffons was, as Tilda Swinton aptly summarised, “a fantasy… 1001 Arabian Nights.” Chanel may add a few more zeros to that figure, though. 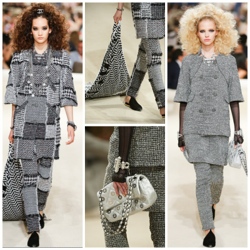