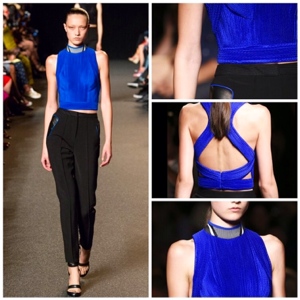 ACCORDING to Alexander Wang pimped-out sneakers aren’t going anywhere, anytime soon. Following on from renditions by Chanel (a tweed and hologram mash-up) and Dior (scattered in twinkling gems) this afternoon, Wang put his case forward for a bad-ass high-heeled stretchy version woven in neon – imagine a high-end Nike Flyknit. And they looked just the ticket paired with engineered knitted scuba dresses.

There was some pretty fierce tailoring too; gone were the rounded exaggerated shoulders of seasons past, Wang chartered a new path for himself with longer, leaner, rigorously streamlined blazers, narrow shouldered and pulled in with Aertex belts or giant barcoded waist cinchers. They were teamed with high-waisted trousers, almost as tight as leggings.

Sporty references popped up throughout: Aertex was crafted into a bomber jacket or employed elsewhere as accents; running shorts were layered over tailored Bermudas and go-faster white piping trimmed trouser pockets, all hints enough to suggest that Wang isn’t about to leave his youthful, athletic tendencies aside now that he is into his thirties and comfortably in his seat at Balenciaga.

But there is no doubt that his time at the storied fashion house has honed his eye; everything felt a little more polished, a little more grown up – albeit, yes, one would need the lithe body of a 20 year old to pour oneself into half of this collection.

Above all else, let’s not forget that Wang is a retail-savvy designer and there was plenty here this afternoon to do more than whet the appetite of his followers. This was a confident, razor-sharp offering that will no doubt push sales of his bread-and-butter T-shirts in addition to fanning the fire for other upcoming projects such as his collaboration with H&M, which hits stores in November. My advice on that? Be quick, dear reader, and expect bedlam. 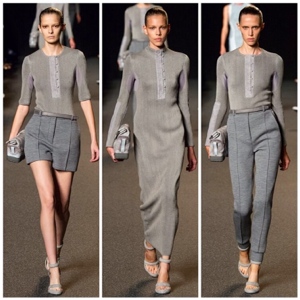 To shop more Alexander Wang visit: www.alexanderwang.com or click below to shop the latest Autumn/Winter collection: