That’s where the enthusiasm and chutzpah of New York was hiding! Jeremy Scott, the city’s l’enfant terrible, sure gives everyone wings to let their fashion freak flag fly – and not just by putting wings on their sneakers. Point in case, Giovanna Battaglia was wearing a knee-length blue-and-black fur cape, one guest wore a skintight outfit that made him look like Captain America, DJ Leigh Lezark sat in a black bondage-inspired bustier and matching skirt across the runway from a smoldering Coco Rocha; the scrum around them was so massive, those already seated had to occasionally duck camera bags being swung at their heads inadvertently. It was no doubt one of the wildest dates of the week.

By show time, the bleachers – sorry, the benches – were packed to the gills, save for one spot. That was soon filled by Jared Leto who apologized out loud for his tardiness, causing titters. And then it was kick-off time, with the ref out first in an eye-popping green shirtdress. The opening looks were fuzzy football jerseys, either maximized into an ankle-length bubble gum pink dress, or in a shorter versions – for girls AND guys – paired with vinyl-looking trousers. The googly-eyed monsters of last winter made a return, both on the runway and in the designer’s longstanding Longchamps collaboration.

With such a sportswear flavoring, it felt more than ever referencing his work with Adidas, particularly as the three-stripe motif cropped up throughout. But he got creative with his base materials. A stiletto boot was actually a pump with a patent leather toe and ribbed sock body extending up to the calf. Basketballs became a puffy team jacket with matching brassiere and shorts. For those who aren’t up to flashing that much skin, there were some flirty dresses in the season’s prints – best in the crop, the Band-Aid one – and even a fairly simple stripped knit maxi-dress. 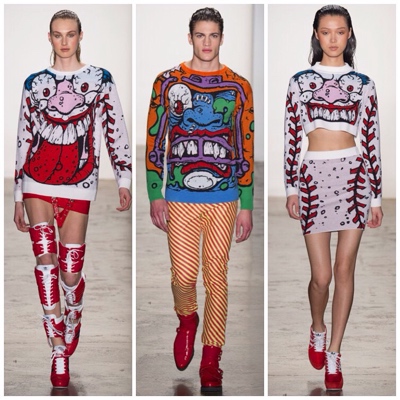 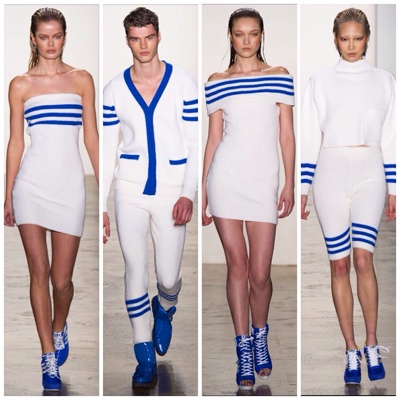 Every Scott show will have its super-charged sexy moment. Here it would be the mesh mini-dresses under which could be glimpsed a vinyl garter and knickers but no bra; or an immaculate corset worn with thigh-high shin guards creating a boot of sorts. The best testament to the designer’s knack for what people want could be found around the room, on bodies famous and not. He knows what works, however improbable. And he’s one hell of a showman, who knows what his ilk will want. That yellow and black one-piece, V-neck down to the navel? We can see that on stage for some songstress’ next world tour, and chances are, the calls are being made right now.

To shop more visit: www.jeremyscott.com or click below to shop the latest Autumn/Winter 2014-15 collection: