Welcome to a whole new kind of Grammy Awards. The spectacle that once gave us Jennifer Lopez in a bare-to-there Versace dress and Lady Gaga arriving in an egg proved to be just as classy (if not more so) than the BAFTA Awards that took place in London on the same night. Its red carpet existed in a void of color, its performances were a mix of snoozy and inspiring, and it all went on without any real jaw-dropping moments. Katy Perry and Beyoncé, recent memorable Super Bowl halftime acts who know how to work a leotard, both performed in demure, angelic white gowns and used their screen time to send a message—Perry’s against domestic violence, Beyoncé’s as a platform to introduce John Legend and Common performing their single from the movie Selma. This year’s Grammys were grown-up, well behaved, and—dare I say it?—thoughtful. 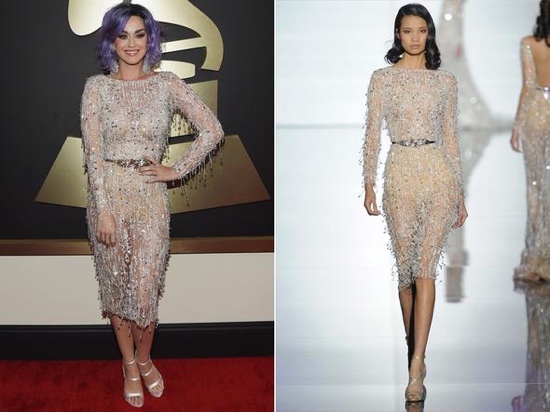 When it came to sartorial statements, the two big trends were pants and a whole lot of cleavage. In the first, more reserved camp were Danielle Haim in Stella McCartney, Gwen Stefani in Atelier Versace, and Anna Kendrick in Band of Outsiders. In the latter, Beyoncé, Lady Gaga, Nicki Minaj, Miley Cyrus, Kim Kardashian West, and Iggy Azalea in sternum-baring dresses of all kinds that, while revealing, still felt tasteful compared to Grammy looks of years past. Few female attendees dared to wear any color at all. The best exceptions were Rihanna, who breezed through the red carpet at the 11th hour in a pink confection of a dress by Giambattista Valli Haute Couture, and Madonna, the queen of shock, who wore a custom Givenchy by Riccardo Tisci Haute Couture look—and also gave photographers a little something extra when she flashed her bum on the carpet.

The fashion experimentation so associated with the Grammys was thus left to the guys. Shorts had a moment thanks to Pharrell, who wore a reflective suit by Adidas preshow and reprised his Chanel Salzburg look onstage for his performance. (Let’s not forget show opener Angus Young, who’s still wearing his shorts suit from AC/DC’s heyday.) Nick Jonas opted for a gray and yellow suit; both Kanye West and Keith Urban revealed some cleavage of their own; and Paul McCartney, Dave Grohl, and Ryan Adams all wore denim of some kind. Just when it seemed like nothing startling would happen, there appeared Prince, wearing a shimmering tangerine tunic and trousers, getting a standing ovation just for arriving and bringing a little excitement to the evening. 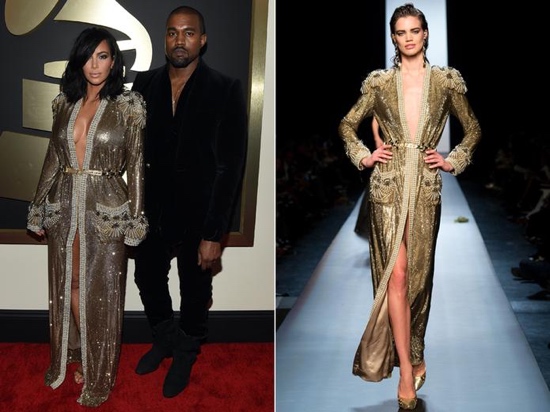