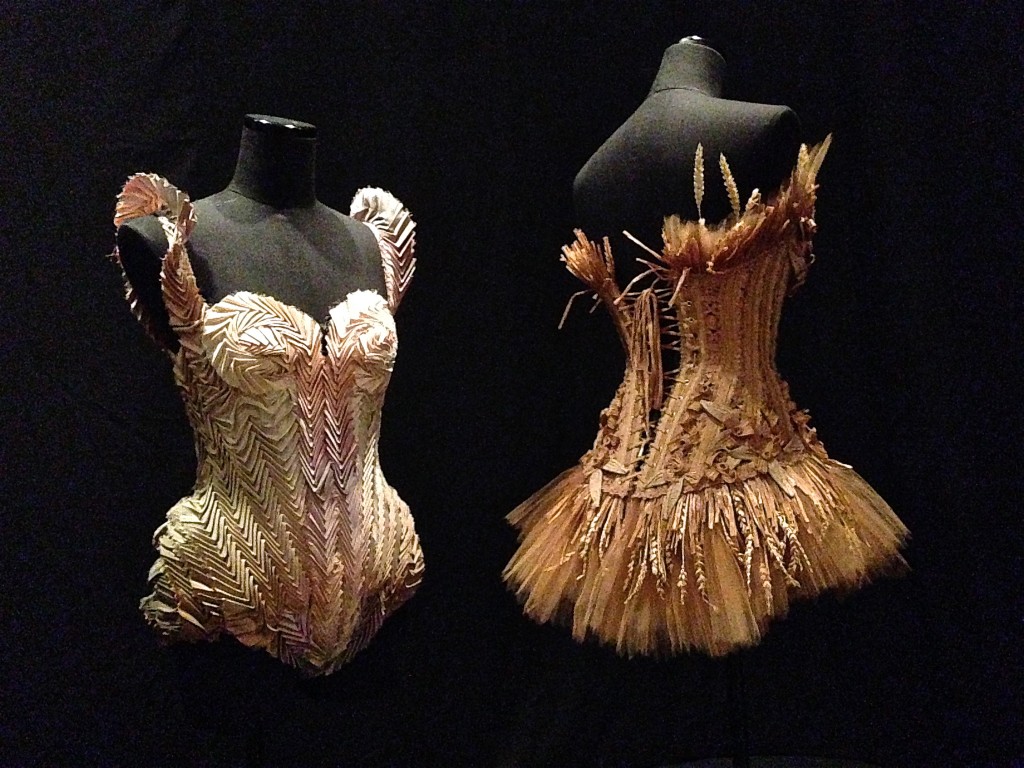 The Jean Paul Gaultier retrospective exhibition, which began its world tour in Montreal in June 2011, has already drawn 1.4 million visitors. Tonight, it opens its doors back home, at the Grand Palais in Paris. Remarkably, the show’s 10th stop marks the first time the Grand Palais has welcomed an exhibition devoted to a fashion designer. For this leg, the scenography has been tweaked slightly—it’s the exhibition’s biggest iteration so far, with more pieces, more muses, 10 hairstyle creations by Odile Gilbert, and more techy touches, including about 50 more custom-designed mannequins. This morning, the designer took a few moments to answer questions.

How does it feel to be headlining your exhibition at home?

For me, retrospectives were always for dead people. But the curators [Nathalie Bondil of the Montréal Museum of Fine Arts and Thierry-Maxime Loriot] convinced me otherwise. I think of this [event] as more of a collection: I wanted it to be life and show life as I like it. I wanted it to be like a party—the perfect occasion to do a kind of perfect show. This time it’s very personal because it’s in Paris. Coincidentally, it happens that I staged my first show in the planetarium at the Palais de la Découverte [located in an adjacent part of the Grand Palais complex], nearly 40 years ago, in October 1976.

The show is the thing for you, isn’t it?

I’ve wanted to do shows ever since I saw the 1945 Jacques Becker film Falbalas when I was about 12 years old. The défilé, the catwalk scene, was a huge part of wanting to become a designer. This [exhibition] is a new adventure, a collection of themes that are dear to me. It’s everything I believe in.

Is it fashion as art?

Fashion is not an art—it represents a bit of what’s happening, it’s a figuration of what is happening out there in society at large.

What is different about the Paris show?

Paris can’t be the same [as everywhere else], but the foundation is the same. We added parts of my childhood—pictures and the first muses with outfits from the first three of four collections—in the first room. It’s the only part of the show that’s chronological. Also, elements from backstage, especially from the amfAR gala in L.A. in 1992. There’s more about my muses, the men and women who inspired me, morally, visually, who formed my opinion on fashion. And there’s a bigger mix of models, both famous and forgotten. It’s the realization of a childhood dream that led to working with people like Luc Besson, Peter Greenaway, and [Pedro] Almodóvar.

What, in your opinion, is the takeaway?

There is beauty in differences. Thanks in part to the media, we spend so much time trying to hide our so-called flaws. Tics and differences should be brought out. There is no one beauty, there are lots, you only need to see it. There’s no reason to have to retrain your gaze. It’s the multiple beauties that interest me. Likewise, life is full of art. You have to see art where it’s not obvious, sometimes. There are people who are works of art themselves. Art is everywhere. Do you feel nostalgic?

No. But to be honest, I really asked myself how I was going to show the clothes here. There are a dozen pieces from the first three or four collections. There’s androgyny, piercing, tattoos, various ethnicities. And in the end, it all stood the test of time. This is like a new fashion collection—I love it.

Times are changing. Today, the fashion that I loved has changed. At one point I was designing 18 collections a year; last year, I put on my last ready-to-wear show. In between, I had the extreme good fortune of being free and creating my own limits. Now the groups are bigger and I am too old to go through filter after filter [of marketing]. Couture is a lab to explore new adventures. I will be doing a Klimt-inspired show for the Life Ball AIDS charity event in Vienna next summer. And perhaps a capsule collection from time to time.

Now that you have stepped back, where do you see fashion headed?

There are always things to pick up from street styles. All creation is the reflection of a social desire. I think that what Rick Owens did with his men’s show is really very interesting. Right now we’re seeing much more of the bourgeois fashion that we tried to beat in the ’80s. Society is quite divided. But when you have such a conservative side, it ultimately lets creativity explode. Given everything that’s going on now, fashion is going to bring out something because it’s a mirror of society. Get ready for a new punk movement!

Yves Saint Laurent said he regretted not inventing jeans. What about you?

I regret not having invented rubber.

For the show, Munich is the next stop. For me, I wouldn’t mind doing a revue like the Folies Bergère!