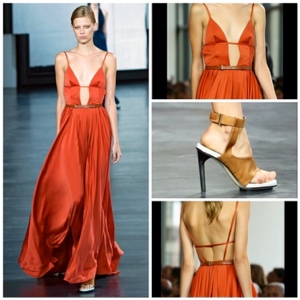 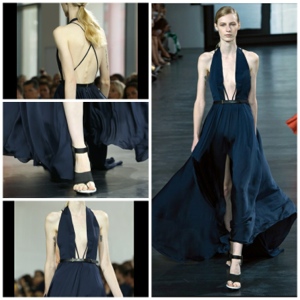 Jason Wu spring/summer 2015 collection came with a nice cushion today – the designer just announced the sale of a major stake in his label to investment company Interluxe. It’s a move that, aside from getting the front row talking as New York Fashion Week revved up, the designer had said would enable him to pursue ambitions of opening a flagship store and expanding into both e-commerce and handbags. It’s been an exciting and expansive five years for Wu since he became America’s fashion darling after dressing Michelle Obama – but rather than being a one-hit wonder on that front, he’s stayed strong and steady.

And steady is perhaps an apt description to use of his collection today – refined and sophisticated as always, it began in a sober palette of earthy neutrals on trademark wearable separates and smart shirtdresses. Wu doesn’t do fuss – you’ll never look at his clothes and be scared off by them. They’re elegant and welcoming to a wardrobe because they’re meant to be. He’s fashion-reliable in that sense, so the dots joined nicely when Wu cited the concept of beauty and the exploration of American sportswear heritage as his inspiration – which accounted for a classic simplicity throughout. It’s the same one that rings true with other brands of that bracket, and which will ring nicely with his new investors – theirs is a track record that includes raising the revenues at Michael Kors and Tory Burch.But even when Wu did add a splash of sass, he kept it on the safer side of things – on simple draped dresses or on tops teamed with trousers that made night-time glamour perfectly accessible for daytime pursuits.

To shop more Jason Wu visit: www.jasonwu.com or click below to shop the latest Spring/Summer collection: